More than $1bn worth of Ethereum has now been burned since the inception of network upgrade EIP-1559 amid increased demand for the asset and rising competition from rival Layer-1 blockchains.

According to data from EthBurned and UltraSound.Money, Ethereum is being burned at an incredible rate following the EIP-1559 upgrade.

The data shows that close to 298k ETH has now been burned, which totals more than $1bn at its current price of $3,412.

The London Hard fork and subsequent network upgrade EIP-1559 introduced ‘fee burning’ to transactions, which removes ETH base fees paid for transactions made on Ethereum. The base fees are the minimum required for a transaction to be included in an Ethereum block.

The London Hard fork and following upgrades are part of Ethereum’s transition to a proof-of-stake network, which would eliminate Ethereum mining and make the asset more sustainable for future growth. It’s expected that the transition – often referred to as “the merge” or “ETH 2.0” – will drastically reduce gas fees for the blockchain.

Following the introduction of the network upgrade, Ethereum saw a resurgence in interest, demand and price action due to its value to the expanding DeFi and NFT spaces alongside its status as the ‘first-mover’ in blockchains.

The rising demand for Ethereum

The huge amounts of Ethereum burned has coincided with the rise of NFTs and its rampant use of the asset to buy, sell and trade digital artwork.

Data from UltraSound.Money shows that OpenSea has contributed the most, which is no surprise following the platform’s meteoric rise to become the premier NFT marketplace on Ethereum.

The sheer amount of trading volume on OpenSea, which has already reached $1.6bn in September, has been the biggest contributor to fee burning on Ethereum with 42k ETH ($176.4m) burned over a 40-day period. ETH transfers, UniSwap transactions and Tether transfers also contribute to approximately 56k ETH worth of fees burned.

The remainder of the top burners includes Metamask transaction, the bridging of assets through the Axie Infinity Ronin bridge, and swaps made on leading DEX 1Inch. 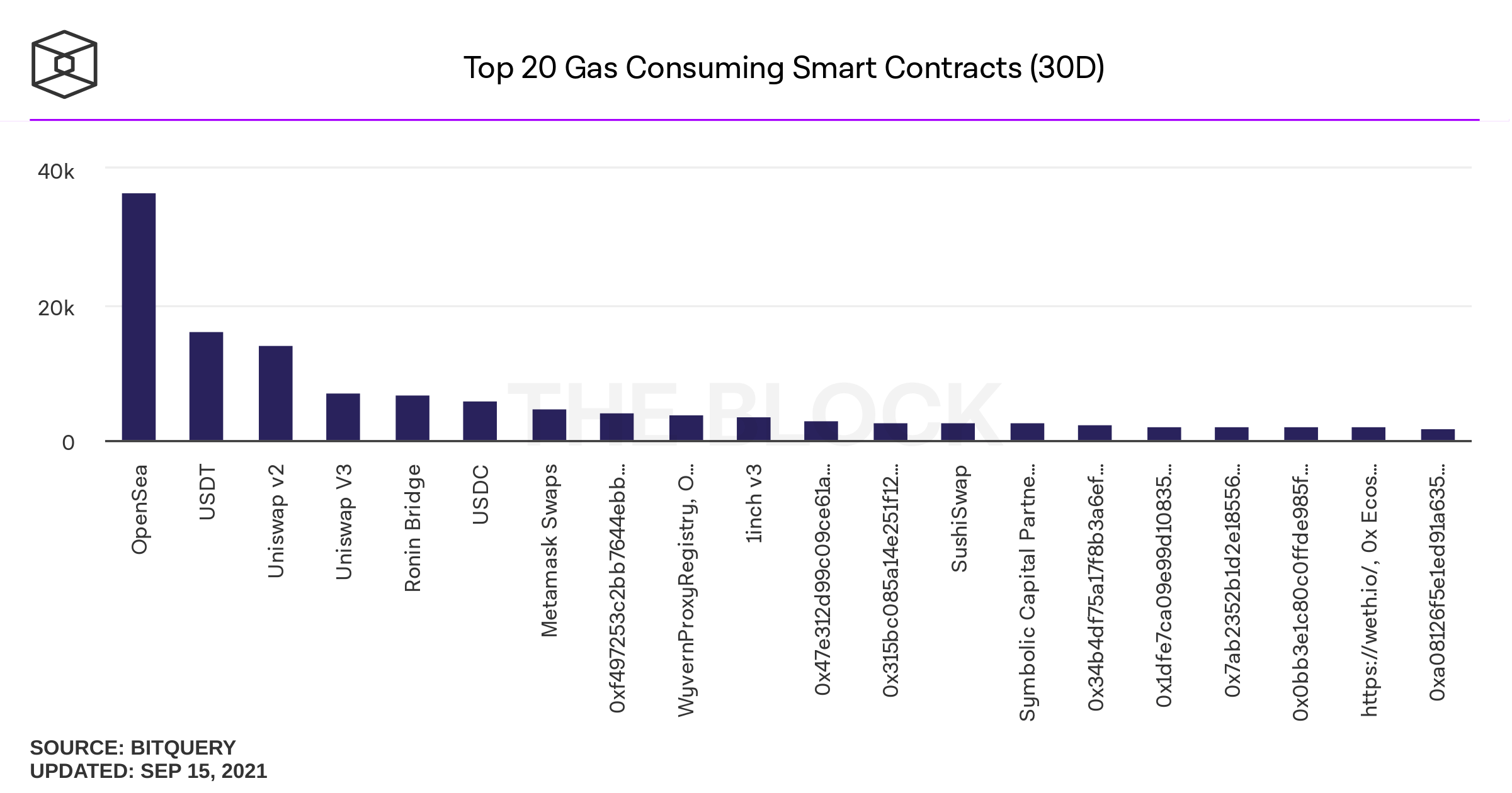 Data from The Block

Additional data from The Block, highlighting the smart contracts using the most gas over the past thirty days, shows the dominance from OpenSea and its contribution to the demand in Ethereum.

The high gas fees that accompany Ethereum are the main talking point when it comes to competition as many in the industry feel that Ethereum-based DeFi and NFTs may price out newcomers to the industry.

A spate of blockchains such as Solana, Cardano, Avalanche and Binance Smart Chain (BSC) have all emerged as competitors to the market leader and have attempted to tackle high gas fees through their promise of low fees and faster transaction times. However, despite recent interest in Layer-1 ecosystems, none have yet to match the sheer size and scale of DeFi and NFT protocols that exist on Ethereum.

Ethereum has managed to retain much of its market share due to the number of protocols available on Ethereum and the Total Value Locked (TVL) in the ecosystem. Ethereum also remains largely decentralised and has retained its status as one of the safest and more secure blockchains available.

Data from DeFiLlama shows that Ethereum’s TVL of $127b eclipses that of the competition by at least tenfold, with BSC being closest at $17b TVL. Additionally, Ethereum has 217 protocols listed on DeFiLlama compared to the 87 BSC protocols listed.

Third on the list is Solana, a blockchain that many expect will eventually be the leading competitor to Ethereum. Whilst only having $11bn in TVL, the blockchain has seen increased interest in its ecosystem due to its instant transaction finality and greatly reduced gas fees. Solana has also become a hotbed for new NFT releases due to low minting and trading costs.

The optimism surrounding Solana briefly took a hit yesterday when its mainnet-beta had to be restarted following a flood of transactions that prevented the network from operating properly. The issue stemmed from validators not being able to validate transactions, leading to “excessive memory consumption” and causing some validator nodes to go offline.

The downtime lasted for approximately 16 hours and raised fears from the community regarding the network effects and decentralised nature of Solana.

Other blockchains such as Cardano have emerged in recent years as a leading competitor but it has yet to produce any working DeFi platforms that can compete with the vast Ethereum ecosystem.

The emergence of Layer-2 platforms such as Arbitrum and Optimism have also given Ethereum a recent run for its money but are still in the early stages of their lifecycle.

Further growth is expected for Layer-2 platforms and it’s anticipated that when leading Ethereum DeFi platforms like Aave, SushiSwap and UniSwap fully support Layer-2, some assets may be ported over at Layer-1 Ethereum’s expense.

Amazon hosts 37% of actively staked SOL - could this be a Solana kill-switch?

Layer-1 blockchain platform Avalanche has raised $230 million in a private sale of its native token, AVAX, to an assortment of leading institutional investors.

The rise of high-yield, low-cost DeFi on Avalanche is bringing a new wave of capital ahead of the much-anticipated second phase of Avalanche Rush