‘A tool for tax evaders and drug dealers’: Facebook’s Libra slammed by US lawmaker

A US politician has blasted Facebook’s Mark Zuckerberg over his planned Libra cryptocurrency, saying it will be a gift to “tax evaders and drug dealers”.

Congressman Brad Sherman made the comments during a hearing in Washington, where members of Congress grilled the Facebook CEO over the looming payment system.

Libra is a blockchain digital currency planned to be launched in 2020. The social media giant aims to let its nearly two billion users pay and send digital cash using Libra – a move Zuckerberg claims will help those with little or no access to banking services.

But Sherman says the underbanked won’t be the beneficiaries, instead “tax evaders and drug dealers” will reap the benefits.

“Crypto either doesn’t work or it does achieve the objective and displaces the US dollar.

“The US dollar is an excellent currency. It serves all the needs except it’s really bad for tax evaders and terrorists.

“That need can be met with a new currency.” 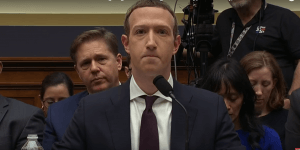 Sherman added: “Your legal team are going to find a loophole from the 1940s so you can call yourself regulatory-approved.

“You’re going to be making powerful burglary tools and let your business partners commit the burglary.

“I know you’ve got at least 100 lawyers who will tell you what you’re doing is legal.

“But given the harm that this could do, they could be very wrong. If this explodes the way it might, you will not be able to hide behind the idea that you didn’t create the Libra organisation.”

Earlier in the hearing Zuckerberg said Libra will “strengthen the fight” against financial crimes.

The Facebook CEO said: “We believe Libra presents an opportunity to strengthen the fight against financial crimes like money laundering and terrorism financing.

“A lot of illicit activities are funded through cash.

“A digital payments system with regulated on- and off-ramps and proper know your customer practices is easier to secure, and law enforcement and regulators can conduct their own analysis of on-chain activity.”

Virtual currencies are used by criminals to launder cash and terrorists are known to use crypto to raise and transfer money. Fiat, however, is still by far the most common method of laundering illicit cash.