All pain, no gain: Declining trends continue despite weekend bounce

PEDRO FEBRERO: "The long-term picture remains overwhelmingly bearish, and the overall trend is negative across the board, with only Bitcoin showing relative stability"

The major cryptocurrencies continue to be stuck in declining trends, despite the bounce that followed the latest technical breakdown over the weekend. The top coins failed to sustainably recover above their prior bear market lows, and today the market took another downturn, with the weakest currencies already threatening new yearly lows.

The long-term picture remains overwhelmingly bearish, and the overall trend is negative across the board, with only Bitcoin showing relative stability, still holding up near its prior low. There is no sign of bullish momentum among the major cryptos, and traders and investors should remain defensive here until at least a short-term trend change, as despite the negative sentiment and the deeply oversold broader picture, odds still favor new bear market lows in the coming period. 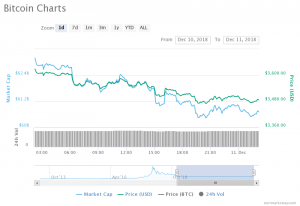 Bitcoin bounced back after last week’s breakdown and tested the $3600 level before dropping lower again.

Funds in the red zone…

As I said yesterday, I’m expecting this trend to continue for the time being, despite fundamentals evolving quite nicely. Just take a look at some of the recent developments both in the Lightning Network and in Liquid.

Another useful indicator is the quarterly reports from blockchain-related VCs, such as Pantera and Galaxy Digital. While the former fund reported a 72.7% loss in the year till the end of August, the latter lost a whopping $76 million in the third quarter alone, which made up the bulk of the $175m loss that occurred over the first nine months of the year.

…And miners as well

Whilst these cryptocurrency funds are the most present example of businesses that are feeling the heat from the crypto crash, they are most certainly not the only example.

Cryptocurrency mining is another business that is heavily exposed to prices. They don’t only sell an asset that is falling in value, but they have to meet monthly expenses such as electricity (not to mention return on capital equipment).

There have been rumours for some time now that Bitmain, the largest mining operation, is having trouble with their upcoming IPO. For example, there were concerns with the IPO given the amount of Bitcoin Cash they had on their books.

Moreover, the SCMP reports that Bitmain and other mining equipment manufacturers are likely to suffer collateral damage as a result of a potential trade war between the USA and China.

Then you also have the impact that the fall in cryptocurrency trading activity is likely to have on the exchanges, as well as the increasing number of tokens getting delisted due to both regulatory actions or lack of user adoption.

Down down, deeper and down: The crypto market downward trend continues