As the World Wide Web turns 30, where will cryptocurrency be in 20 years?

Bitcoin celebrated its 10th birthday in January. With the World Wide Web turning 30 on Tuesday, where will Bitcoin be in 20 years time?

The World Wide Web celebrated its 30th birthday on Tuesday. The inception of the web has completely revolutionised the way in which humans communicate, work, and even have fun.

Looking back over the past 30 years, we can see just how far society has come, and how reliant everyone has become on this new wave of technology.

In the early 90s, the World Wide Web was still thought of as an alien concept by many. This was demonstrated on an NBC panel show in 1995, when three panelists seemed utterly overwhelmed by the concept of emails, as shown in the clip below.

“There it is. What is internet anyway?” the host remarked, before a panelist replied: “Internet is a massive computer network. The one that’s becoming really big now.”

“What do you mean? How do you write to it? Like mail?”

“A lot of people use it and communicate with NBC writers and producers. Alison, can you explain what the internet is?” the panelist asked, inquisitively.

This example exhibits how difficult it is to grasp technological innovations during the start of a trend. With this being considered, it’s understandable to see why there is such a plurality of cryptocurrency naysayers in the modern age, with the technology underlying it being heavily misunderstood.

Where will cryptocurrency be when it turns 30?

The cryptocurrency ecosystem is still in its infancy in comparison to the World Wide Web. At the turn of this year, Bitcoin celebrated its 10th birthday, having risen from relative obscurity to the mainstream in the space of a decade.

It begs the question that if Bitcoin survives to see its 30th birthday, where will it be? Will it become the challenger to the banks or will it wither away like many hype-driven speculative bubbles?

While it’s easy to compare Bitcoin to the dotcom bubble in the late 90s or the British ‘Railway Mania’ bubble in the 1840s, Bitcoin has fundamental differences that could act as a catalyst for a societal shift away from traditional banking institutions.

Bitcoin spawned out of the financial crisis in 2008. The trust of banks, who were pivotal in the subsequent recession, was at an all-time low, and this caused a rise in the notion of self-sovereignty and the importance of people having control of their assets.

It may take another financial crisis for the importance of Bitcoin to be truly understood by the masses, but there is still a lot of time for growth.

Ten years after the World Wide Web launched, we saw the infamous dotcom bubble, with the levels of rampant hype surrounding the internet drawing parallels with Bitcoin’s bull market of 2017.

The stock price of the vast majority of websites fell dramatically, but the likes of Amazon, Apple, Microsoft, and IBM ultimately prevailed, going on to hit unexpected heights in the following two decades.

The same pattern of behaviour could eventually be attributed to cryptocurrencies, with it being widely expected that Bitcoin and a few altcoins will survive, while the vast majority of gimmicky altcoins will one day be worthless.

If Bitcoin can continue to grow at the same trajectory as it has done for the past decade, the price of digital assets would be astronomical.

Cryptocurrency exchange Bitstamp began BTC to USD trading in August 2011, when the price of one Bitcoin was just $11.81. It had a rocky start, falling to as low as $2.19 just three months later.

Since then, Bitcoin has risen by more than 150,000 percent, with price now lying in the $3,800 region. If we see a similar rise over the next two decades, Bitcoin will be worth $5.7 million per coin, commanding an almost unbelievable market cap of $114 trillion. 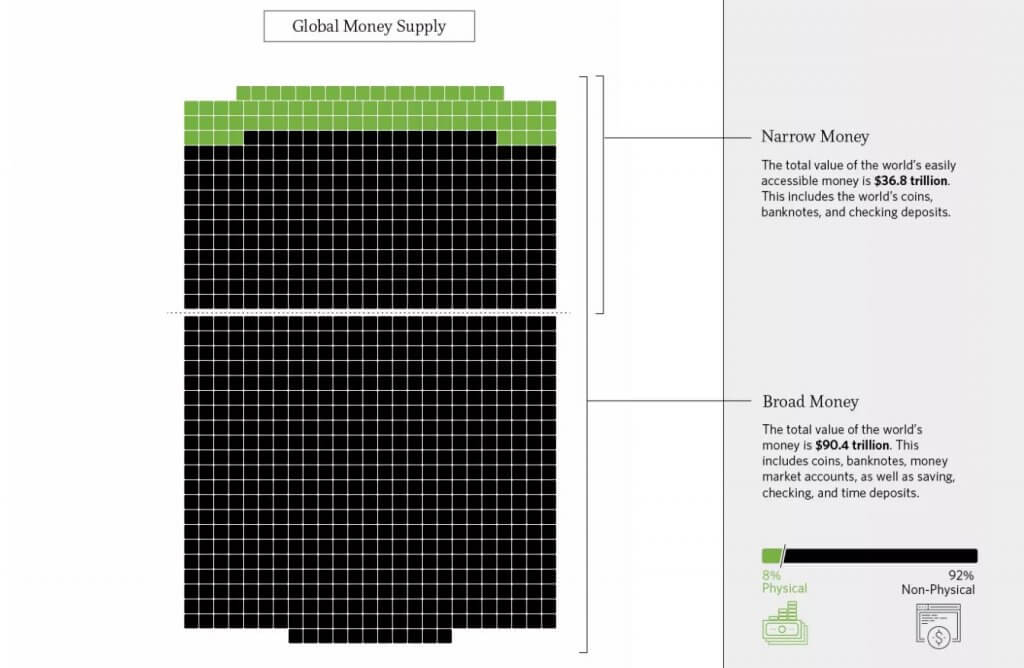 This may seem totally unachievable, and it probably is, but the entire stock market capitalisation is currently $73 trillion, so for crypto to rise into the trillions is not out of the question.

The total value of the broad money supply stands at $90.4 trillion. If we factor in inflation at three percent per year, that figure will rise to around $160 trillion. If Bitcoin can achieve a three percent share of that, it would be worth $240,000, which is probably a fair estimate.

One of the major factors that will determine the future price is the global regulatory frameworks surrounding digital assets.

While it’s not possible for regulators to prevent transactions taking place and blocks being mined on the blockchain, it is possible to ban the use of cryptocurrencies – if it’s considered to be a decision made with the public’s interest in mind.

However, if a regulatory ban was to happen, it would see millions of people around the globe lose capital due to the dwindling prices of cryptocurrencies, which would be more harmful than simply regulating the industry to ensure scams and Ponzi schemes are exposed.

The short term doesn’t matter, true believers are here for the long game

In the short term, Bitcoin and the cryptocurrency markets look undoubtedly bearish. Since falling to $3,150 from $20,000, there has been an evident lack of open interest in the market.

This week, we have seen a few altcoins rally more than 150 percent, but the entire cryptocurrency market cap remains the same at around $133 billion. This shows that while coins are moving to the upside, new money isn’t entering the market. It is simply people already in this space chasing pumps out of desperation as Bitcoin begins to steady itself between $3,000 and $4,000.

Whether Bitcoin falls back down to $1,800 or $1,150 is insignificant in the long term. We have all seen these bearish market cycles before, and Bitcoin has always bounced back to make a new all-time high.

This is why current investors in the space should not be worried about the short term. If you take a look at the Amazon stock price, it began trading at $1.33 before rallying to $111.50 at the height of the dotcom bubble. It then crashed to as low as $5.51 before a 17-year bull run took it to an astonishing price point of more than $2,000.

Bitcoin could well be the Amazon of recent times. It won’t disrupt e-commerce, but it could have a major societal impact on the way in which the public interact with money and assets, and for that it should not be underestimated.

Disclosure: The author of this article does not own any Bitcoin or any other cryptocurrency.

What does the future hold for Bitcoin?

How blockchain voting could change local councils and governments