Avalanche is proving itself as a worthy competitor in the battle for layer-1 blockchain superiority alongside ETH, SOL and BNB

AVAX, the native token of the Avalanche blockchain, has hit a new all-time high of $96 as competition intensifies in the Layer-1 blockchain space.

The token has seen a 44% increase in the past seven days thanks to increased interest in the Avalanche ecosystem via Avalanche Rush incentives and the recent announcement of ‘Blizzard‘ – a $200m fund dedicated to “accelerating development, growth, and innovation“.

The move to its new all-time high has been spurred on by the popularity of decentralised finance (DeFi) on Avalanche, which remains the most appealing aspect of the low-cost blockchain. 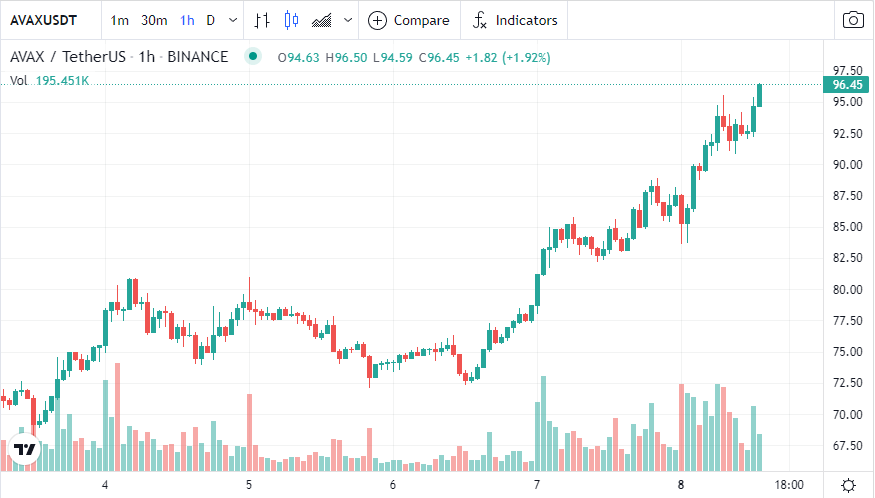 DeFi on Avalanche has now attracted almost $10bn in total value locked (TVL) to the ecosystem and continues to grow thanks to innovative platforms such as Trader Joe and Aave, which both offer borrowing and lending markets to users.

A number of key metrics have also aligned on the ecosystem, indicating that more users are using Avalanche, more transactions are being made and the number of contracts being deployed continues to grow at an impressive rate.

Avalanche offers an attractive alternative option to current blockchain leaders Ethereum and Solana – which have also both reached recent all-time highs in the past few days of $4,762 and $260 respectively.

Avalanche also offers a suitable alternative to the burgeoning Binance Smart Chain (BSC) and its native token BNB, which has seen incredible growth in recent weeks and is now pursuing a new all-time high above $690.

The AVAX token is also starting to attract the attention of major centralised finance platforms such as NEXO and Voyager, which are expected to offer users yields and ‘credit lines’ on the token.