Axie Infinity is the new leader of NFT gaming

With so many NFT projects skyrocketing this month, Axie Infinity stands out with a 30,000% growth over the last year

Valued at just under $5 in June of this year, the AXS token is currently trading in the $35 to $45 range, putting the project’s native NFT platform above OpenSea and Dapper Labs’ NBA Top Shot, who were dominating the market for most of 2021.

The game is implemented on a play-to-earn basis, allowing users to raise, battle and trade digital creatures. The protocol earns revenue by charging a 4.25% fee when players buy and sell Axie NFTs in its marketplace and collecting fees for creating and breeding axies.

The explosive growth comes after Sky Mavis raised $7.5 million in a Series A funding, with Mark Cuban serving as one of the backers. Other investors include Konvoy Ventures, Derek Schloss and Stephen McKeon.

However, Axie’s developers attribute the spike to a recent switch from Ethereum blockchain to their own sidechain called Ronin. Transactions were made faster, while gas prices were reduced to a negligible level.

Available on PC, Mac and IOS, the majority of 350 000 + daily active players join the game on Android.

Holders of Axie Infinity Shards (AXS) are rewarded for staking their tokens. AXS also act as governance tokens for the Axie universe, allowing users to participate in key votes. In this way, users are motivated to hold on to their tokens, creating substantial backing for AXS’ s market value. A special treasury was designed by the Axie team for storing fees and sales profits, as well as a portion of staking rewards. 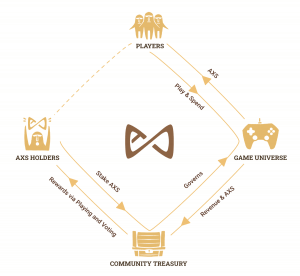 With other products like Project K on the way, it will be interesting to see how the company develops. Make sure to read about other gaming projects on Coin Rivet.