Behind the scenes of the Coinbase altcoin announcement

As reported by Coin Rivet, Coinbase recently announced a list of cryptocurrencies which may be added to the platform in the near future.

Some of the more famous ones are: 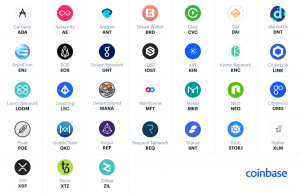 Just by looking at some of the projects, we can spot some common investors or backers behind the scenes. Not that it shouldn’t be expected, but it was never disclosed directly by the company.

It should be stated, as common practice, Coinbase has been quite open and transparent regarding its dealings, although some minor hiccups occurred during the listing of Bitcoin Cash, as prices rose too quickly and then crashed, leaving some room for insider trading speculation.

One of the major shareholders of Coinbase is Digital Currency Group (DCG), founded by Barry Silbert. The company has a wide variety of investments and notably has investments in cryptocurrency projects that have previously been added on Coinbase, as well as some to be listed soon. At the DCG Founder Summit 2018, they revealed that major investments have been made in Zcash and Decentraland. Zcash has recently been listed on Coinbase, while Decentraland is one of the projects expected to be added soon.

Digital Currency Group was also a backer of the Basic Attention Token project and its Brave browser, which was the second ERC-20 token added to the platform. The first ERC-20 token to be listed, 0x (ZRX), faced some controversy with allegations of conflicts of interest between investors at Scalar Capital and Coinbase.

At the time of writing, District0x (DNT) is listed as a partner of the Decentraland project, and both are collaborating with the Aragon (ANT) team. One could almost expect the Aragon token to be listed in the near future as well.

What I can say about the future is that it does look bright for Coinbase and many ERC-20 tokens. I cannot guarantee there aren’t external motivations at play, but if our ultimate goal is to improve user adoption, it seems logical that having more tokens listed on Coinbase is better for everyone.

After all, the more freedom of choice investors have, the better!

Should Coinbase disclose its private interests in some of the cryptocurrency projects out there?

Is it that terrible they’re looking out for themselves?

Disclaimer: The views in this article are those of the author and not necessarily of Coin Rivet.

What can we expect from the crypto market following the EU-Malta deal?

1.5% of Ethereum locked into the smart contract behind the Dai stablecoin