The issues surrounding Augur’s prediction markets have taken a turn for the worse after Binance’s research team uncovered ‘irregularities’ in the platform.

The dwindling volume on Augur has been well documented since the turn of the year, with Coin Rivet reporting a significant drop-off in actively trading markets despite Augur claiming a higher figure in its weekly report.

And now, Binance Research has produced a report that has brought an increasing number of problems to light.

“Though the project has stimulated some questions about the legality of some prediction markets and the actions that they may incentivise, the platform itself still has yet to be thoroughly investigated by many,” Binance Research commented.

Technical issues in regards to “market illiquidity, incentive problems, voting, and possible forks” have all been raised by Binance.

On the topic of the illiquid nature of the markets, Binance Research said: “Users are usually more likely to participate in markets with low spreads and high volumes. However, for the cost of a couple of Ethereum transactions’ gas payments, a manipulator could utilise two Ethereum accounts to make fake transactions in order to provide an initial padding of volume to attract potential traders.”

The report added: “For the majority of markets, participation rates are incredibly low, conversely leading to a feeding frenzy on the few markets that do have significant reported volume.”

Another issue that directly affects liquidity is the dispute voting system and the subsequent forks that may be forced.

If a market goes into dispute, it will be settled by a democratic vote that sees stakers battle it out to reach a decision.

Stakers that back the winning outcome will receive a share of the losing stakes proportional to the amount they contributed. 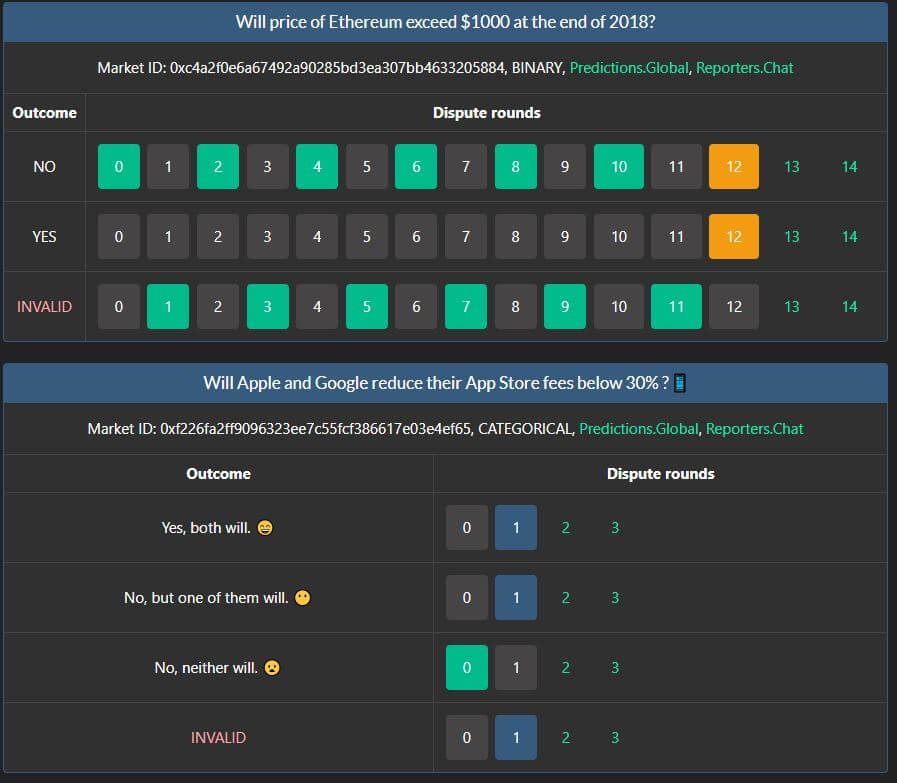 According to the Augur white paper: “Each outcome must post 2 times the total amount staked in the entire dispute minus 3 times the stake for the other outcomes in the round.”

However, if this threshold is pushed on a continuous basis so that an outcome’s stake reaches 2.5% of Augur’s total supply, the chain will undergo a fork.

One of Augur’s most active markets in recent months was the Ethereum price prediction market, with three possible outcomes being listed.

As the contract ended after the end of the day, the entire market could be marked as invalid.

This is called a “design flaw attack”, which also happened in 2018 when markets closed one day before the result of the US mid-term elections.

What next for Augur?

In spite of the scathing review of the platform, Binance wrote: “To their credit, the Augur team has already identified several of the considerations mentioned, as well as other potential improvements to consider for the second version of the platform.”

It’s worth noting that Augur is still actively traded on Binance among a number of other exchanges, commanding daily trade volume of more than $7.5 million.

Augur has performed surprisingly well since the turn of the year despite the ongoing scrutiny, rising from a low of $5.77 in December to today’s price of $15.45.

? Includes a more prominent display of when markets end to aid traders in understanding when a market’s definition is potentially invalid due to timezone or end time issues

? New verification modal dialog gives you better understanding of the market you are about to create

On March 30, Augur released a v.1.11.0 app release accompanied with the following statement: “The app includes a more prominent display of when markets end to aid traders in understanding when a market’s definition is potentially invalid due to timezone or end time issues.”

The company added: “New verification modal dialog gives you better understanding of the market you are about to create.”


Volume on the Augur prediction market platform is seriously dwindling

The NBA’s Sacramento Kings have partnered with ConsenSys to sell match-worn sports gear on the Ethereum blockchain. The pair have announced the launch of Treum, an auction platform which...

LinkedIn Learning, the educational portal of the world’s largest professional network, has identified blockchain as the most in-demand “hard skill” for 2020, pushing cloud computing into second place. The...

Internet star Pewdiepie has sang the praises of Justin Sun’s Tron and BitTorrent on his YouTube channel. It has been well documented that the YouTube sensation, real name Felix...