Bitcoin: After the 10th birthday celebrations – what next for the cryptocurrency?

Just six days after the celebrations for the 10th birthday of Bitcoin, I take a look at how it has developed and is being adopted by users.

The ultimate goal is to empower its users and with this comes responsibility, as Jordan Peterson has argued.

Proof of key events, which took place on January 3, are a way to ensure more centralised players, like exchanges, don’t overstep their boundaries by investing what isn’t rightfully theirs.

The Bitcoin of today is considerably different from the Bitcoin released by Satoshi a decade ago. This is a good thing, meaning a huge community of people got behind this idea of decentralised money and improved its workings.

At the time of writing, more than 800 commits have been done in the main Bitcoin Core repository, on github. Also, 54 different people have added value to the network.

Other crucial variables we should look at are transaction count and the number of miners supporting the Bitcoin network, as both are key to understanding how far Bitcoin has come.

It’s worth looking at the total hashing power to secure the Bitcoin network. When people say ‘the more miners, the better’, it’s only because we’re (rightfully) assuming more miners means more hashing power, which is a good thing.

More hashing power translates into a more secure network because more energy was spent to secure each block.

The last decade has seen the constant increase in Bitcoin’s hashrate has been constant, but there has been saturation as miners left during the 2018 bear market.

However, I predict an increased hashrate in the long-term. Another key metric is the number of Bitcoin transactions as a currency becomes more valuable the more transactions there are.

The more people transact Bitcoin, the more other people will want to follow suit, especially if you consider the likely medium-term price of Bitcoin going above $10,000.

The Long Road To Adoption 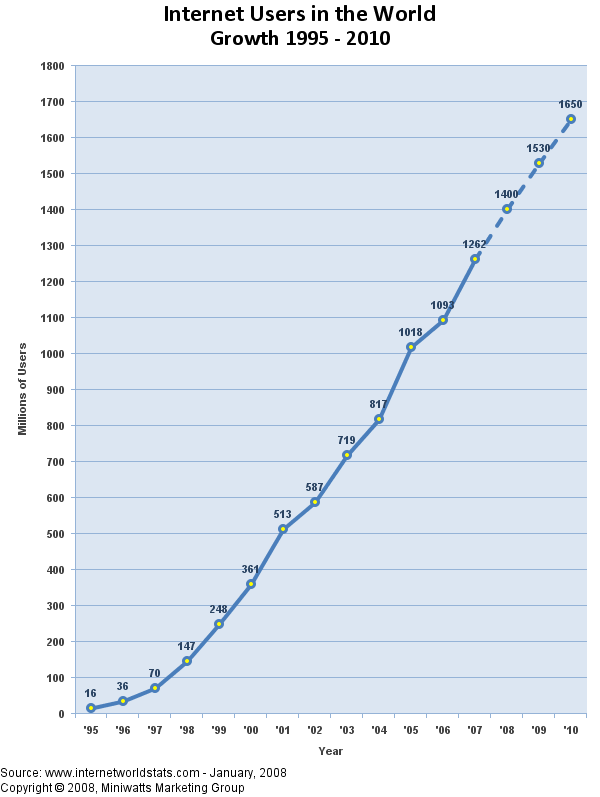 It took the internet close to 20 years to reach 1 billion people worldwide, as it started its mainstream development during the early 1980s.

Right now, we’re experiencing a terrible, but needed, bear market. If you’re worried about what will happen to Bitcoin’s adoption in the short-term, look at what happened in terms of internet user adoption during the great Internet Bubble crash. Between 2000 and 2001, the number of people online almost doubled!

The technology, although has been developing quite well, is nowhere ready for mass adoption as we still lack development around all key dimensions: infrastructure, understanding and applications.

We’re getting there, though, slowly but surely, with the increased adoption of novelty tech around Bitcoin.

The Lightning Network, for example, which was successfully launched thanks to Lightning Labs and their amazing effort, already has more than 2,000 active nodes and about 15,000 channels!

Other projects like the Casa Lightning Node, which created a small hardware device so that users can easily setup a LN node (much like you set up your internet via a modem), and the Open Node team, who received a hefty investment from the community’s favourite Bitcoin advocate Tim Draper, are also promoting better use-cases and implementations for this decentralised P2P payment channels technologies, built alongside the Bitcoin layer.

Hopefully, the LN will help a lot in Bitcoin’s mass adoption.

Other advancements like Schnorr signatures, which grant considerable more privacy to the transactions as multi-signature hashes become indistinguishable from traditional txhashes, will most likely drive adoption even further.

Businesses would benefit directly from the implementation of this technology, as it would grant them considerably more privacy when creating approval workflows for bitcoin transactions – we would never know if a certain transaction was the result of a multisig or not.

As highlighted in Delfr, a resource for technical Bitcoin content:

“It turns out that similar to the Schnorr scheme, a variant of it known as Elliptic Curve Schnorr […] benefits from the linearity property that allows multiple private key holders to jointly sign a transaction such that the resulting signature is not a naive concatenation of individual signatures, but rather a non-trivial aggregation that reduces to a monosignature. We will discuss multisignatures and explain the advantages of the Elliptic Curve Schnorr variant in a separate post.”

How To Scale Bitcoin

The two major community concerns, during the past 5 years have been around scaling Bitcoin and alt coins.

Alternative solutions have been proposed and some are even currently live, although the overall sentiment is that no Holy Grail will ever be found and we might have to deal with the fact we’ll need a multitude of applications in order to transact securely, privately and permissionless.

So far, the most prominent solutions have bee:

All solutions above have their own merits and drawbacks, however, it is important that we can successfully implement as many as possible, in case one fails or becomes too centralised. By distributing risk, we’ll also be distributing rewards, as we need to spend many hours developing solutions that won’t be fully used.

Nevertheless, as I made sure to underline above, the goal of Bitcoin is to achieve decentralisation, which usually means promoting effectiveness over efficiency.

We can leave that to all Dapps running on top of all major blockchain-protocols. After all, it’s ok to have multiple degrees of centralisation, if we really want to achieve global adoption.

For me, the future of Bitcoin and so many of the current top-20 cryptos is quite bright. I would be quite surprised if in the next decade we don’t have at least 15-20% of people worldwide using Bitcoin on a regular basis.

Disclaimer: this article shouldn’t be taken as financial advisement; it represents my personal opinion and should not be attributed to CoinRivet. I have savings invested in cryptocurrency so take whatever I write with a grain of salt. Do not invest what you cannot afford to lose and always read as much as possible about a project before investing.


Morten Nielsen: Bridging the gap between fiat and cryptocurrency

These days, we are constantly advised on the advantages of cryptocurrency as a form of payment – low transaction fees, increased security and an inclusive outlook – and how...

Facebook’s Libra announcement sent ripples through the crypto community, boosting Bitcoin’s value over $12,000 for the first time since the dizzying heights of early 2018. As the US Senate...