The BTC hash rate – now sat at a steadfast 160.1 TH/s – is a measure of how many miners are actively searching for a hash on the SHA256 Bitcoin (BTC) network. 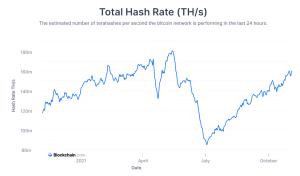 Meanwhile the SHA256’s difficulty rate has been adjusting respectively, increasing an impressive eight times in a row for the first time since 2018. 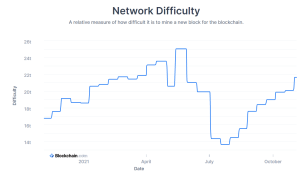 The network difficulty now sits at familiar 21.66t – a patterned level almost identical to that seen immediately before the March rally.

Mining recovery has come from the unexpectedly fast exodus of miners from China into different regulatory environments in North America and Asia. In many ways, the Chinese ban has forced a complete rethink of the way Bitcoin’s hashrate is conceived.

Amid the recovery, Bitcoin mining stocks are absolutely booming on publicly-traded exchanges – clearly benefiting from both the institutionalisation of BTC as an asset which can be leveraged as collateral for fiat loans, and from the lack of competition in China.

Furthermore, some analysts speculate miners are stockpiling BTC as collateral – creating a supply shock impact on the market.

Investors are being wowed by an impressive 217% average return of mining stocks in 2021 – which so far have outperformed BTC.