What is sound money and how does it work? How does it differ from fiat currencies? And is Bitcoin (BTC) sound money?

Last week I discussed libertarian economics based on the Austrian School of thought, which in essence promotes economic, monetary, and financial freedom by having governments intervene as little as possible – to avoid too much centralisation – leaving the economic model to be developed by private enterprise.

Of course, this model is based on the theory of sound money, which is something we haven’t experienced for quite a long time. It was my grandma’s generation that was the last to actually have and use sound money.

Not that she knows that, or even understands it (although I’ve made sure to explain it to her), but my point is there was a time, not that far back, when money and currency were intimately entangled. This was taken away from us (the people) when currency stopped being convertible with money.

The time of gold 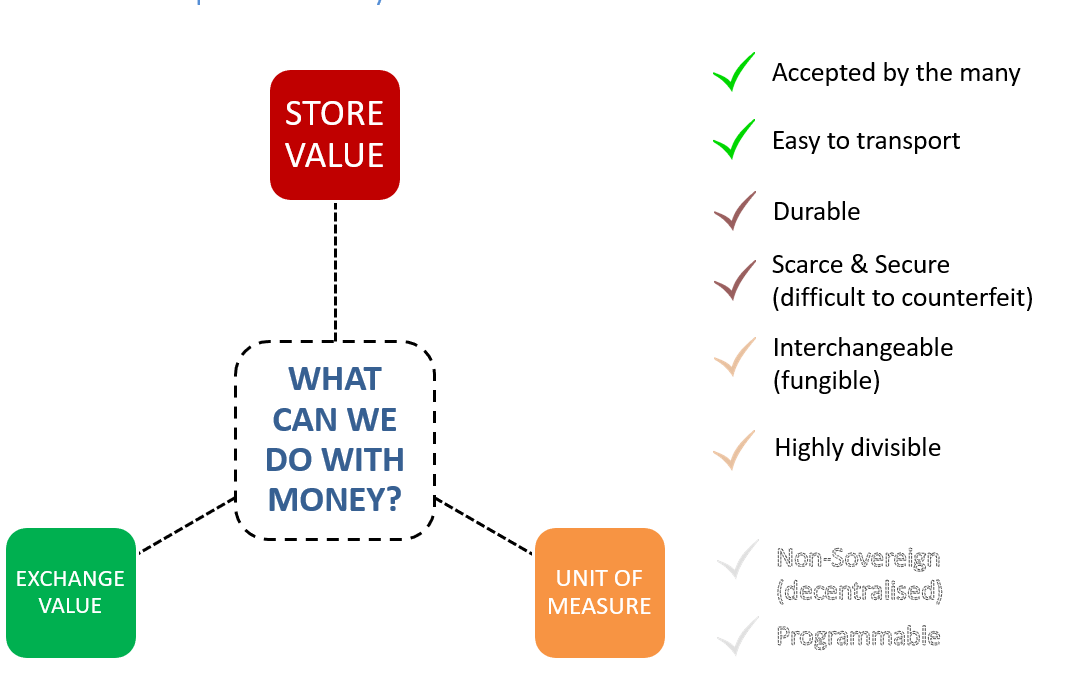 So what is money? How does it differ from currency and how can it be used? To answer that, I urge you to look at the diagram above, as it exemplifies what money is and its most important properties.

For instance, for money to be used as a currency – to exchange value and to measure value – it needs to be accepted by the people and be easy to transport, while at the same time being fungible and highly divisible. In addition, something that was brought up when Bitcoin was invented was the ability to program currency and to have a digital money not controlled by any country (self-sovereign).

What we can also conclude from the diagram above is that not everything can be used as money.

What else do we need for something to be considered money? It seems for an asset to be money, it needs to store value. If you have some doubts regarding my last sentence, just think about it: how can you guarantee you have money in the future if there is no way for you to store it? How can you plan for the future if you can’t store value?

The answer is quite simple: you can’t. Look at Argentina or Venezuela. Both countries are currently suffering from hyperinflation. If you live in a country where money is not sound, you face a high risk of currency debasement, which leads to hyperinflation or the exponential loss of currency value.

In layman’s terms, what sound money guarantees is a layer of complexity over who can create currency. Because it’s hard to produce, it’s also hard to debase due to supply restrictions.

For example, why do you think humans have historically used gold to exchange and store value? The reason is that governments (or kingdoms and empires) would first need to mine gold (or silver) in order to produce currency.

Following this logic, why do you think sound money failed?

The time of fiat

That was a trick question as sound money never actually failed. What happened, as usual, was human greed.

Because rulers understood how currency and money worked, what they did was shift the system from a sound money-based one to a trust-based one – hence the word fiat, which means value by decree. The reason why this system worked so well in the past (and continues to do so) is due to tax collection.

By enforcing taxes, rulers were able to force the markets to trade in a certain asset type, even if it doesn’t hold people’s best interests – which is to store value in the long term. By separating the ability to store value and the ability to spend into separate technologies (money and currency), it is possible to actually take over an entire population with minimal force.

That is the beauty of fiat currency: it allows governments to expand and contract monetary supply as they see fit in order to produce booms and busts that can kick-start or cool down an entire economic cycle.

Do you think this monetary system is fair for the average citizen?

The answer is quite simple: even though the world has experienced huge economic growth since the end of the gold age, inequality has risen exponentially as well, especially between the ones who have a lot and the ones who don’t.

Moreover, because we are now facing the challenge of digital currencies going mainstream, we’re also giving away all our financial information to the highest bidder. It is not a matter of if, but when. Just think of the number of hacks and data losses we’ve faced in the past couple of years.

So what is the solution?

The time of Bitcoin

Bitcoin is the first and most widely-used digital cryptocurrency for a reason. It’s the first digital form of sound money that has ever existed. Due to its limited supply, its inability to be copied, and because it is completely decentralised and no actor can impose restrictions (in terms of transactions), Bitcoin is clearly the solution to most currency problems we face today.

There are many hurdles it faces though, like not being fully accepted worldwide or having a great deal of volatility associated with its fiat pairings. Interestingly enough however, both problems are not really problems, but circumstances of Bitcoin’s market cap still being “low”.

Do you want to know why Bitcoin will become the world’s base currency? Because its owners actually own it. Because it’s expensive to produce. Because it is anonymous. Because it gives people the freedom to transact anywhere in the globe without asking for permission.

To finish up this very opinionated piece, I would like to quote Bitcoin developer Jimmy Song:

“In short, Bitcoin works because Bitcoin is sound money. And sound money changes everything. Bitcoin will change the role of government, how people relate to one another, how people will perceive the future, how everyone will plan. Bitcoin is nothing less than a complete upheaval of the current fiat system with large second and third order effects that incentivize building instead of rent-seeking. Welcome to the revolution.”

BitMEX co-founder pledges to give away majority of wealth

So many cryptocurrency and blockchain experts, so little time