Bitcoin enters another parabolic advance as Bitfinex premiums fall to 1.5%

Bitcoin has continued along its short-term parabolic trajectory, despite the recent news regarding troubles at Bitfinex and Binance

Bitcoin has broken out again as it continues along its short-term parabolic advance to fully retrace the November 2018 capitulation event.

One piece of news that is acting as fuel to propel the current trajectory is that non-Tether backed exchanges have now closed the Bitcoin price gap to under $100 between them and Bitfinex, which is currently in the midst of a legal challenge from US authorities.

Not the first Bitcoin correction

Since the project’s inception, price action for Bitcoin has seen 13 separate corrections of over 30% in price (in USD terms). The most recent of which took BTC price from a $20,000 top all the way down over 80% to settle at its most recent low of $3,100 in December 2018.

One common factor through all the ups and downs has been a pattern of higher highs and significantly higher lows for each of its subsequent corrections. Another key factor to note during the history of the now decade-old asset class is a growing list of HODLers.

This large and growing group of believers in an open-finance protocol have been battle-hardened through a cycle of various bull/bear markets to preserve their economic stake in a future ecosystem that they believe to be free, global, and open to all.

Bitcoin’s latest parabolic rise is reminiscent of prior bull runs, as they too were filled largely with bad news and anxiety in the early stages of the trajectory.

Over the last week, we have seen a Bitfinex premium build and then drop from between 6% to its current 1.5%, meaning the price gap between itself and its rivals like BitMEX, Coinbase, and Gemini has fallen sharply. To add to this ongoing legal and proof of reserve debacle, the market has also witnessed the first major hack of Binance. 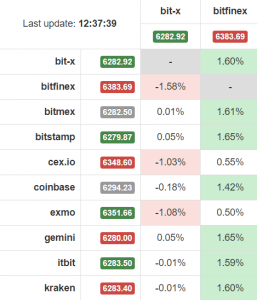 Binance’s hack saw the loss of around 7,000 Bitcoin. However, history shows that any potential re-org debate is a non-starter from the get-go, as the Bitcoin market has once again stood firm to preserve its 10-year immutability claim.

Back in 2017, the main rhetoric prior to the bull run involved fear about how the community and exchanges would deal with a chain split (which eventually took place as the Bitcoin Cash fork) and also a scaling dilemma that was resolved through the UASF and NO2X incidents.

Following a break above $6,200, the market will most likely look to wait and see what support may form above this historically relevant support/resistance band. If margin shorts continue to get squeezed at places like Bitfinex, we can expect them to potentially support the current upwards trend in the markets.

If the parabolic advance continues, prior targets look to suggest that a five-figure valuation may not be as crazy as it sounded just a few weeks ago. However, a period of sideways action is more likely, as both bullish and bearish traders may give some short-term gains back to the exchanges that let them play around with high leverage.

Earlier this week it was reported that major multi-national investment bank JP Morgan had offered accounts to both Coinbase and Gemini. The surprising move comes two years after JP...

Bitcoin derivatives exchange BitMEX has gone offline for unscheduled maintenance after the trading engine suffered a “major outage”. A statement on the exchange reads: “The Trading Engine is currently...