The Bitcoin (BTC) hash rate has dropped to a 13-month low in the aftermath of China’s latest crypto mining restrictions.

BTC’s hash rate (SHA256) plummeted to 58.4 quintillion hashes per second (EH/s) on Sunday, following a fleeting recovery above 100 EH/s over the course of the last week. 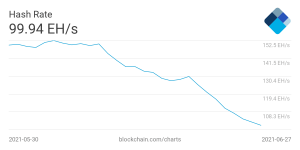 The hash rate reflects the amount of BTC miners actively trying to validate (mine) blocks on the BTC chain, and this massive drop is reflective of Chinese miners shutting down operations amidst China’s great Bitcoin mining migration (representing 65% of global BTC miners).

The BTC network difficulty rate is due to adjust at the end of this week; and analysts are expecting to see a reflective drop of over 20% from around 20 trillion to 16 trillion.

This is a bullish sign, and can be read as healthy news for the BTC network indicating a potential short-term bull run (as BTC price generally increases when the hash rate declines). 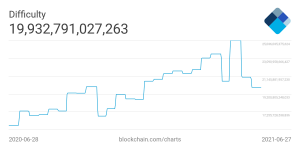 Beijing’s two birds; one stone policy move to shutdown BTC mining operations is aimed at ensuring the domestic supremacy of their new Digital Yuan over the BTC as a means of starving off dollarisation of cross-border commerce and restricting uncontrolled capital outflows, alongside reducing the China’s carbon footprint and helping to balance the strained national power grid.

The market has responded favourably to the hash rate decline, with Sunday’s price rally peaking at 8% after a troubled week of volatility. 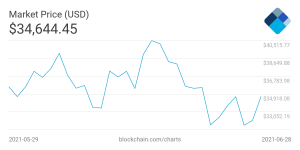 Hash Rate can be viewed as a measure of how difficult it is to find a hash below a given target, so simply the more miners actively trying to find a hash, the higher the Hash Rate.

Mining of the BTC chain (SHA256) is distributed across 16 known mining pools, however, there are an increasing number of mystern hash captures (unknown miners) that regularly comprise around 7.5% of Hashes.

Some analysts speculate many of these mystery hash captures are done by Iran, however, the exodus of Chinese miners will likely see this number increase as some move into decentralised operations.

The difficulty rate automatically adjusts on a fortnightly basis so as to maintain consistent block times of around 10 minutes per block; this ensures blocks are added at regular intervals into the BTC chain.

This is a critical data point for miners as it’s closely linked to their profit margins; effectively acting as the grim reaper of miner capitulation.

The difficulty Rrte also informs miners on their decisions to sell, so needless to say, all eyes are on the adjustment later this week.

Over the past few years miners have wrestled with the volatility of BTC price, and this has seen a series of rise and falls in the BTC hash rate especially during 2018.

To understand the significance of this week’s sudden plummet it is worth considering the hash rate has remained above 100 EH/s for the past year, with the January 2021 bull run giving rise to a mining difficulty rate ATH (a 21.5% increase).

As China’s miners begin their exodus; Iran has stepped forward in an attempt to entice the crypto mining industry – this week announcing 30 operational crypto mining licences. This is an extension of the licencing system started by Tehran in 2019, which has already seen a handful of Chinese mining operations licensed to operate in the country.

Iran has a mixed relationship with cryptocurrencies and crypto mining, and these new licences are seen as a move towards a regulated acceptance of the industry as opposed to Chinese style bans,  although the Iranian regime confiscated over 7,000 BTC mining rigs during May citing strains on the national energy grid.

However, BTC mining in Iran has become a point of controversy on the international stage – with the country hosting 4.5% of BTC mining operations – suspicions have arisen about the potential use of BTC by the regime as a means of subverting sanctions and bypassing trade embargoes.

Iran’s oil exports have fallen substantially over the past decade, the result of U.S.-led sanctioning.

The regime has been accused of redirecting these crude oil reserves into the national grid instead; in order to power the mining of BTC as an alternative to sale on the international market, and some analysts speculate that Iran has redirected 10M crude oil barrels under-sanction into BTC mining in the past year, with speculated revenues of around $1B.

These claims have substance, BTC mining was strategised as a response to embargoes in a publication from the Iranian President’s Office.

Biden’s new administration will be considering crypto mining strongly as they return to the table to negotiate the Iran deal; and the latest appointee to the treasury Brian Nelson has already highlighted cryptocurrencies role in money laundering as a focus in a recent hearing with the U.S. Senate.

The hash rate drop has clearly provided Iran with a huge opportunity to capitalise on BTC mining; in both job creation, wealth accumulation, and as a tool in their grand strategy.

Many institutions now look to blockchain analysis solutions to verify the origin of their Bitcoin.

What does all this mean?

Whilst the lower hash rate will drive competition amongst miners and boost their profit margins in the short-term, it does increase the vulnerability of the BTC network to cyber attack.

9) Chinese miners have been quick to mobilize… one colleague sent some technicians down to Shenzhen, to focus on 2nd hand miner testing, repair, cleaning, and repackaging for exportation. He has cleaned and shipped out over 20,000 ASIC’s in the last 2 weeks pic.twitter.com/92pAynQigl

The hash rate will remain low until Chinese BTC miners are able to re-establish operations overseas; this could take a while due to new regulatory environments, additional costs in labour and construction, and a global shipping container shortage.

This is all considered bullish news for the price of BTC, and some prominent analysts (such as the creator of PlanB theory above) have highlighted that the price of BTC tends to rally during difficult market downturns.

With BTC liquidity appearing to decline too, expect market movements.