Bitcoin is curling up to attack $6,000 as market order book depth stands above $300 million

Bitcoin has closed a second weekly candle above the psychological $5,000 price point as a combined order book depth of $300 million is protecting a 10% move to the downside in BTCUSD

Bitcoin has managed to hold its market cap above $90 billion as the markets look to be winding up for another attempt to break through the next key level of resistance to the upside at $6,000.

If the market can find continued support above $5,000, then another bullish move will seemingly take the decentralised asset back above a $100 billion valuation.

After closing the weekly candle with a doji, traders are signalling indecision in the market and calling for a ‘no-trade zone’. However, since breaking up from $4,200 at the start of the month and smashing through multiple long-term moving averages (such as the 200-SMA), the global asset is looking to build confidence for another break towards the $6,000 range – which supported the asset five times during the course of the 2018 bear market.

Other indicators also on the up from a trading perspective are daily spot trade volume (now consistently above $10 billion a day) and open interest – which was over 500,000 BTC on the go-to high leverage exchange BitMEX.

In my opinion we are on a channel continuation range and the next target (and hardest resistance) will be $6,000.

But before I'm expecting a week or two of side range within the channel. pic.twitter.com/X7vbOzQHua

We have also recently seen an increase in order book strength, which currently sits at $310 million. This is a substantial increase since the start of the year when it was holding around the $150 million mark. The metric tracks “buy support” for each cryptocurrency. It does this by working out the “sum of the buy orders at 10% distance from the highest bid price”. 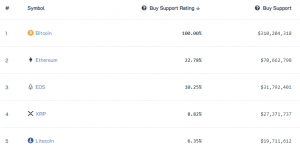 Coinmarketbook.cc sources data for this metric from major exchanges including BitMEX, Binance, Bithumb, Bitfinex, OKEx, Huobi, Bittrex, Poloniex, Kucoin, and Cryptopia. The data takes into account both spot and leverage liquidity and also makes the buy support calculation based not just on USD books, but also altcoin liquidity.

A local high for order book strength was last seen just before the early April price spike when the buy support sat at just over $250 million.


Bitcoin: ‘Every time you hit resistance, it becomes a little bit weaker’

A smaller win for the bears on BitMEX

Since the bulls absolutely destroyed the bears and caused over half a billion dollars worth of liquidation as a result of the high-volume break upwards on April 2nd, it seems like the bears have taken a smaller victory over the last seven days with $145 million and $80 million in long and short liquidation respectively. This weekly differential was seen on a number of occasions leading up to the break past $4,200. 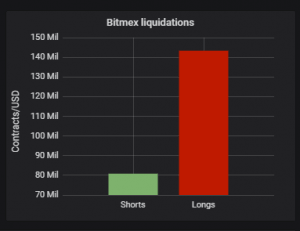 Bitcoin price looks to be at a key psychological point at the moment. It only needs to double in price from here to regain a five-figure valuation. Price looks to currently be curling up to attack the key resistance zone of $6,000. When this price mark is hit, Bitcoin will be back above $100 billion in market cap and more importantly will have made a 2x move away from its $3,000 low – signifying a potential end to its bear market cycle.

I would say it’s 65:35 at this point in regards to whether the late-2018 low will hold – but my advice to all long-term accumulators would still be slow and steady (and regular) buys is still the best strategy, rather than trying to fill that bag up during a possible capitulation that may or may not come in 2019.

What is a penny cryptocurrency and why are they attractive to investors?

Binance and Huobi set to speak at Blockchain Life 2019

Earlier this week it was reported that major multi-national investment bank JP Morgan had offered accounts to both Coinbase and Gemini. The surprising move comes two years after JP...

Bitcoin derivatives exchange BitMEX has gone offline for unscheduled maintenance after the trading engine suffered a “major outage”. A statement on the exchange reads: “The Trading Engine is currently...