Bitcoin: Let’s gain some perspective, shall we?

Bitcoin has had a pretty rough week. Not only have we had to deal with a substantial price drop but the hard fork business of BCH hasn’t made the space look too attractive. However, despite recent short-term negativity there is reason to be positive.

In 2017 Bitcoin and cryptocurrencies enjoyed a substantial bull run all the way to $20,000. Despite the euphoria, not everything was rosy. In my opinion, Bitcoin was not ready for such a vast interest from the general public. As the price rose, more people began using the coin and the issue of scaling became dramatically apparent. As the network became congested transactions fees became unreasonable. This issue led to a decisive moment in the life of Bitcoin.

The scaling issue had been simmering on the surface of tension before the bull run had began. There were two camps. One, who thought that Bitcoin needed to scale through a 2nd layer solution. The other believed onchain scaling was possible through an increase of the blocksize. The bull run of 2017 was the catalyst to permanently split these two camps. Roger Ver, Jihan Wu, and others, decided to that the best course of action was to split from Bitcoin and increase the blocksize. They were unhappy with the proposed Segregated Witness upgrade. This led to the creation of Bitcoin Cash.

Segregated Witness was incorporated into the Bitcoin code thanks to a User Activated Soft Fork which would allow for another scaling solution called Lightning to be implemented. Whichever side of the argument you were on, there was consensus that scaling Bitcoin was of upmost importance.

If the cryptocurrency had carried on its meteoric rise the scaling issue would have been exacerbated. Therefore, the current bear market has allowed developers more time to introduce a solution. If either solution is successful (I side with Lightning by the way), then if or when there is another bull run the scaling issue will hopefully be resolved.

The price of Bitcoin

Now, let us discuss everyone’s favourite topic, price. If you bought Bitcoin around November or December 2017 and didn’t sell in January 2018 you’re probably not feeling too fantastic currently. This is totally understandable. You have lost a substantial amount of money right now. The chart from January 2018 doesn’t make for particularly pleasant viewing.

However, if we zoom out further the price action hasn’t been too barbaric. We are currently seeing prices that we last saw around 13 months ago. With Bitcoin, that isn’t too bad. 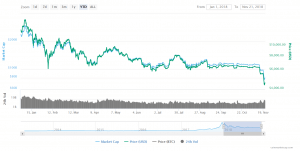 Some readers may argue that I am being too blase about the current situation. Perhaps this is correct, but this comes from my own experience within the space. After buying my first batch of Bitcoin in 2013 for around $90 I witnessed the meteoric rise up to $1,000. To be honest, I was still extremely uneducated about Bitcoin and what is was, or even what I was doing. I had moved my initial batch from MT Gox over to a Blockchain.com wallet soon after my purchase and didn’t check on them until it reached $1k. As soon as I logged in, I witnessed a transfer of my Bitcoin being sent out of my wallet. I had been hacked. All my Bitcoin had gone. Someone though, apparently based in Cape Verde judging from an I.P check, had just become a lot richer.

It was quite devastating. However, I knew the fault was my own. I hadn’t done enough research and my security was about as weak as you could imagine. After a few months of feeling sorry for myself I couldn’t resist peeking behind the curtain once more at what Bitcoin was about. I didn’t want to buy, I just wanted to know more. After a period of employment I began to put my savings back into Bitcoin, which was then, like now, suffering through a tough time.

This was an extremely valuable lesson for me. With that experience I was able to fully research the ideas behind Bitcoin, the way it works and most important how to store my Bitcoin safely. If you bought Bitcoin because you thought you were going to be a millionaire then the asset probably isn’t for you. It is not just a currency, it is a movement. A movement that is attempting to increase transparency, challenge the traditional banking system and empower the individual against the problematic neoliberal system we currently inhabit.

The “wen moon” or “lambo” memes have been in the community for years. But, they are memes not to live your life by. Those people within the space who show off their flash cars or brag about their wealth have more than likely brought very little value to the space. Now, instead of promoting what Bitcoin stands for, they instead promote their own “brand”. YouTube clickbait titles and awful music videos are their forte. Not Bitcoin. If these are the people you have been listening too, I am unsurprised if you lost money.

If you have lost your money and are feeling upset you only have two options in reality. One is to cut your losses and accept that you have lost money. The second is to hodl on and hope the price recovers. There is no right or wrong option. Yet, if you do decide option two, I implore you to further research the space and learn as much as you can. If you don’t believe in Bitcoin then why bother? However, if you are tired of multinational banks laundering money without penalty, with incessant money printing coupled with harsh austerity measures, then Bitcoin is an alternative.

Bitcoin set to go up in smoke in France