Whilst this is an interesting notion that I tend to agree with, we humans like to predict stuff, so let’s just put that advice to one side for now and see what some key analysts have prepared for us today! 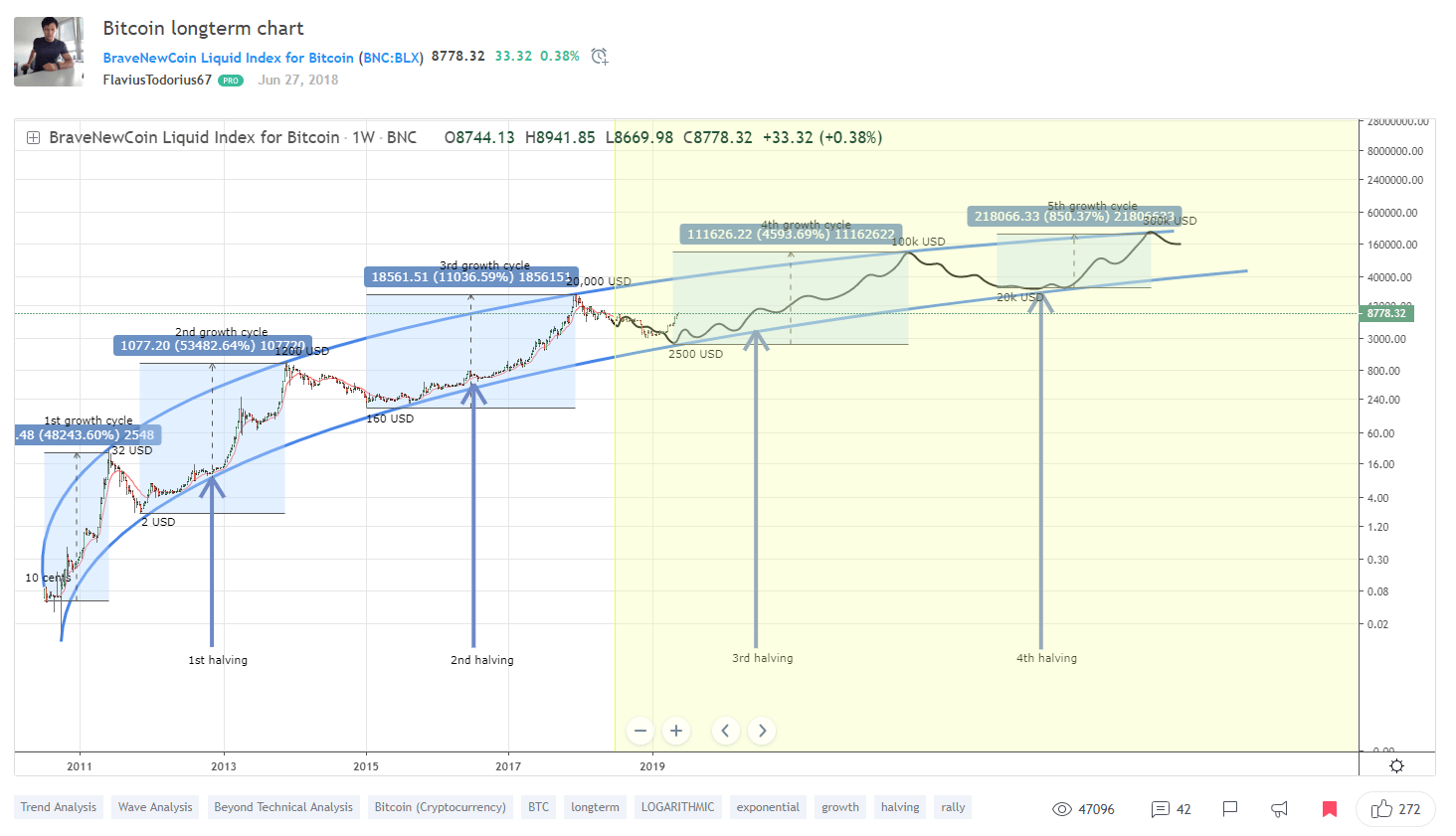 The chart above is often used to look into Bitcoin’s long-term price action. At the time of writing, BTC is trading above $8,750 after price spiked during the weekend, climbing from $8,000 to almost $9,000 in the space of a few hours.

I expect Bitcoin to break $10,000 before the end of the year, and I expect the $20,000 barrier to be broken sometime during the following year (2020). Still, major events can happen which could potentially extend the time frame or do the exact opposite.

Usually, black swan events are associated with big price moves. Remember the Mt Gox hack or when the CME futures product launch? Those events clearly had a huge influence on short-term price action, even though in the longer term – as seen above – you can hardly see them (especially the events pulling price downwards).

Other major events that tend to have a long-term positive impact on price are the halving events – when the Bitcoin reward given to miners is cut in half. Around six months to a year afterwards, price tends to break record highs. Will the trend continue? I don’t see why not. The less supply there is, the more pressure there is on price to move upwards.

This is assuming that there is not a black swan event that causes the market to panic, like a decisive fork (remember BCH?) which can split the network into smaller pieces, destroying some of the underlying value – as Bitcoin is based on its network of users.

We see the market rejecting everything, except BTC.

This has been our dominant investing thesis since 2011.

We’re doubling down on Bitcoin Maximalism with new capital.

Earlier this month, Heisenberg Capital, an investment fund led by Bitcoin investor and maximalist Max Keiser – from the show “The Keiser Report” – has announced BTC has been its flavour of choice when it comes to long-term holdings, and I have a feeling it’s not alone.

Even if we assume that Bitcoin’s trajectory follows its historical trend, we are still looking at a six-figure price level in the very near future. To see why, we have to look at Bitcoin’s major cycles.

Even if we take longer to get there, my personal opinion is that we’ll eventually get there. There’s little that could wipe out Bitcoin at this point.

My long-term price prediction is that in less than three years, so around December 2021, Bitcoin will have broken way above $100,000.

Have I just shot myself in the foot? Only time will tell!

*The views and opinions expressed by the author should not be considered financial advisement. The author is not a professional trader, nor investor.

Bitcoin is moving into the typically low volume weekend following a 3.1% decline in the past 24-hours as it begins to re-test the $9,000 level of support. At the...

Data from investment platform eToro has revealed an inclination for retail investors to flock to cryptocurrencies that deploy the proof-of-stake protocol. Cardano’s ADA token was one of the notable...

Ethereum has demonstrated a period of bullish continuation following its break out against its Bitcoin trading pair last week, with it rising by 4.28% in the past 48-hours. The...