Bitcoin traders openly admit to cashing in on conflict

Opportunist traders admit they want tensions between Iran and the USA to escalate in order to cash in on cryptocurrency price spikes that occur during military conflict.

The price of oil and gold rose dramatically within hours of the US airstrike which killed Iranian military leader Qasem Soleimani in Baghdad on January 3. The drone attack also appeared to push the value of BTC upwards from what had been a drawn-out slump to below $7,000.

By the time news of the attack fully emerged, Bitcoin had shaken off its post-Christmas hangover and looked set to be building for a challenge on the $8,000 mark.

During the following days of military posturing, according to a Coin Rivet exclusive for the Daily Express, the trading volume escalated as investors across the globe began piling savings into cryptocurrency.

Bitcoin’s price – at great odds with the trend it had established in the lead up to Christmas – continued to build before another lurch skywards in the moments after news broke of Tehran’s retaliation in the early hours of January 8.

In an instant, BTC was surging to a high of $8,400 – a figure many would have seen as impossible only a week earlier.

Despite the threat of war and bloodshed, several crypto traders have admitted to cashing in on the conflict with little care for the potential wider consequences of international unrest.

One such trader – known as ‘BT_C_gal’ on crypto platform BitMEX – explained she had no qualms about making money on the back of the threat of war.

“I’m not responsible for the air strikes, I’m not launching any missiles, and I’m not killing anyone, so I don’t see what possible harm I’m doing by making a profit out of my positions,” said the trader, who purportedly hails from Scotland.

“I’ve been trading in Bitcoin, Ethereum, and Litecoin since 2016 and have a good sense of when and how something’s going to go up or down.

“That’s just a skill I’ve developed and has no bearing on the rights or wrongs of war. It’s not as if I’m profiteering from conflict, because that’s a question you should be asking of arms manufacturers and the interests they hold.”

Another trader – ‘Vitza5032’ – wasn’t quite so thoughtful on the matter. Instead, the ‘London-based’ user was keen to express his desire for further conflict.

“More bombs, more missiles, more international disruption – it all helps me to decide when and where I place my trades and I have no problem with it.

“The more anarchy and disruption we have, then the more people invest into crypto and that just suits me fine. If Trump and Boris want to start a world war then bring it on.”

True to form, since last Wednesday’s peak, the cryptocurrency markets have mirrored the international narrative.

As both the US and Tehran offered the glimmer of a veiled olive branch by the weekend, Bitcoin’s price began to fall. An apparent ‘stepping back from the brink’ on both sides was matched by a steady decline from $8,300 to below $8,000 before rising and falling again over the last two days during political unrest and civilian protest.

Following a weekend of discontent after Iranian officials admitted launching missiles at a Ukraine International Airlines plane that crashed, killing all 176 on board, protestors took to Tehran’s Azadi Square.

Iranian police have been accused of using live ammunition against the protestors who were appealing for international peace.

The protests seemed to see the markets form a steady decline before US President Donald Trump waded in with a tweet to Iran. 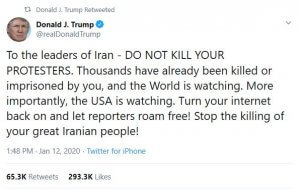 Within the tweet, he wrote “…the world is watching. More importantly, the USA is watching” in an apparent veiled threat that further military action was not off the table.

Bitcoin’s value rose almost instantly, touching $8,200 before settling again to where it currently stands at around $8,100.