Bitcoin’s future could be rooted in Plato’s philosophies

Coin Rivet columnist Joseph DeBono examines how a world shaped by Bitcoin could follow the very path set out 2,350 years ago in Athens

Monty Python’s “Life of Brian” is a work of comedic genius of the highest order. Among the best scenes in that film is Romanes Eunt Domus.

Brian, an aspiring member of a Judaean resistance group, attempts to vandalise Pontius Pilate’s palace with anti-Roman graffiti. As Brian covers the walls with Romanes eunt domus – a phrase of such mangled grammar that it makes me wince every time. John Cleese’s centurion surprises him, and starts correcting that atrocious Latin with a mixture of such utter physical brutality and ruthless didacticism that it evokes in me Latin classes with a professor whose methods were by and large identical to those of Cleese’s centurion. 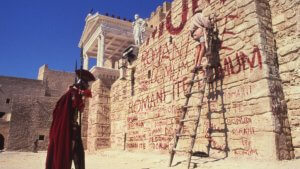 Brian works on his grammar

But, the last time I watched, there arose also a thought leading from those ancient days to the age of Bitcoin.

I learnt Latin by methods very similar to those by which the centurion schooled Brian – intimidating, traumatic… and terrifyingly effective. Which is why the idiomatic and semantic cacophonies of Vires in Numeris, the Latin tagline of Bitcoin, wreak havoc with my linguistic sensibilities.

Vires in Numeris purportedly means “strength in numbers”, supposedly, because it is no form that Biggus Dickus would have understood.

“Strength”, in its Latin form vis, as well as in English, is a collective noun, therefore singular. The plural vires means a collection of physical forces, such as strong enemy armies, not the vague abstraction here. The preposition “in” is so very English in idiom that it conveys the very opposite of the intended meaning, which is “power arising out of numbers”.

The first law of Latin composition is to understand concretely the meaning of the English original and then to render that meaning into Latin, not to bung your English phrases into various search engines and translate the words.

The preposition “in” as in in numeris simply means “inside/upon numbers”, hardly, I imagine, what the phrase should mean.

The Romans would have used the preposition ex, “(arising) out of”, hence vis ex numeris. Even better, drop the preposition, use the instrumental ablative, and render it into vis numeris, “strength by the agency of numbers”. Hail Caesar, and all that sort of the thing. But even in its bastardized form, Vires in Numeris harks back a very long time ago, to a virtually identical idea, but one that that has soaked history in tyranny and blood.

This idea was born in a city that has probably had a more disproportionate effect on civilization than even Rome and its language. It was said of Athens, even 2500 years ago, that it was the school of Greece itself, and in that city at that time, there walked a man who has about as good a claim to be called the Father of Civilization as any other man. That man was Plato, an aristocrat and wrestler whose mastery of his language was so great that his writing makes Shakespeare’s English sound clumsy and uncouth in comparison.

Now, Plato did not just wrestle in athletic contests, he also wrestled with some very big problems, namely the problems of justice, ethics, truth, and distinguishing truth from the illusions that we receive through our senses.

Throughout his life, Plato suffered from the instability and insecurity of the Greek world. The Athens he lived in alternated between radical democracy and tyranny, it burnt with war, and with the fever of plague. It rang with all the chaos of its radical democracy, and was infested with philosophers for hire, irreverent poets, and rhetors using their art to tilt the scales of justice in favour of the highest bidder. Politicians, poets, artists, sophists and others of their ilk appeared to Plato to distort truth, and foment trouble and division for their own enrichment or political benefit. Much like today then, except that Plato was a troubled genius and overcome by the pity of it all. 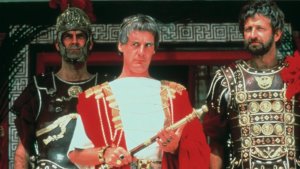 When Plato thought that he had found his solution, he put it down in his famous Republic and, in that work, he built the foundations of his political philosophy – a political philosophy that has been called “autocratic”, “paternalistic”, and “totalitarian”, a blueprint of political thought that significant thinkers have held responsible for the emergence of every sanguinary numbskull to put his ideology, philosophy, or personal creed above the well-being of citizens or any other consideration.

Plato’s solution to the chaos and anarchy of his time was to propose a state rigidly divided into classes, to add very strong doses of collectivization, and then to unite philosophy and politics, and hand absolute political leadership over to philosophers, or to politicians who had become philosophers.

These were to run the state in whichever way they deemed best in accordance with the “truth” as philosophy had revealed it to them. If the Republic is not at the top of Kim Jong-un’s bog-reading list, it’s not for lack of affinity.

Why did Plato, who was not only a brilliant man, but a fundamentally good one, come up with such a horrific model of the state? The answer lies with his disgust at the chaos, turbulence, and rhetorical contortions of Greece at his time, and his conviction that only truth could lead men out of chaos into the light of truth.

For the people, thought Plato, in the Greek world of his age, were imprisoned in a dark cave, unable to look anywhere except at the Tartarean back of that cave. Behind them stood their current rulers and thinkers, all of them corrupt liars, using fire to cast shadows and illusions on the back of the cave.

Through this, they fed their people a distorted reality only of benefit to these rulers. Philosophy alone, supposed Plato, could give a slave, who might escape the cave, the understanding of true objective reality, and shatter the bonds of that physical and intellectual slavery. And this truth that philosophy reveals? According to Plato it is the forms, essentially non-sensible paradigms that are in a state of transcendent and unchanging perfection.

Everything material is merely a shadow of these transcendent forms, and, for so being, is only corruption and illusion. So, forget artists and poets (liars, all of them), the only way to attain to an understanding of the ultimate truth of the forms is through a rigorously logical and objective philosophical process that is essentially mathematical.

It is then Truth arising out of numbers, rather close to the nebulously expressed idea of Vires in Numeris, i.e. that it is out of numbers that truth, therefore salvation, or health, or strength arises. Who would’ve thunk it?

It is amazingly evocative for a Classicist to see in Bitcoin a lineage that runs back to the Golden Age of Civilization. But it is equally moving, and profoundly so, that while this key premise of Bitcoin is the same as the Platonic one, that soundness arises out of numbers, there is also implicit in it a direction of thought that is truly novel, and an estrangement from the Platonic philosophies that have held us fast in their grip for 2500 years.

For Plato took his premise that truth – or soundness – comes from numbers, and made it the foundation of a political philosophy of totalitarianism centralised around its ruler, and the complete subordination of everyone else to whatever this philosopher-king holds to be the highest truth. For it is in the model of such a rigidly organised state, that we can eliminate the inefficiencies of anarchy, chaos and illusion (for example: self-determination, spontaneity, inspiration, art and poetry). And that is how Plato took the leap from truth arising out of numbers to hegemonic centralisation that has soaked the world in blood and tears.

Plato demanded rulers be the high priests of transcendent truth and in consequence the world has suffered the outrages of Caesars, High Priests, Philosopher Princes, Kaisers, Fuhrers, and Comrades ever since.

But with Bitcoin there may be new hope. For across the abyss of time, the same old Platonic idea of soundness in numbers has sprung up anew in Bitcoin, but with a direction and momentum in total opposition, that is towards decentralisation and peer-to-peer interaction beyond the power of the state and the king.

Plato gave us the abominations of ideology and ideological politicians. We know the horrors that came of this. As we are aware of a growing sense of unease about our time – a time when states and corporations seem to be growing bigger and bigger, and extending their control further and further.

Plato has shown us that no man is fit to hold power. Can Bitcoin slay this hydra at last? Can it restore some measure of real parity between organisation and individual? Can it spike the guns of that he who governs by whatever creed he espouses, irrespective of the blood he sheds? Can a model of governance arise out of a distributed network that will achieve the right balance between organised efficiency and human spontaneity and self-determination? Or will it bring with it some hitherto unknown ogre of its own?

It is impossible to predict, but it will be interesting to watch at the very least, if only to see a 2500-year-old monolith of thought turned to dust and sand.

And vires, eh? Such an insufficient word for a concept that really expresses “truth” and “trust”, rather than the abstract notion of “strength” that it does in this context! So… hmmm… fides. Yes, fides, trust, honesty, loyalty, good faith, truth even by extension. So, there you have it. Fides ex numeris – trust and truth arising out of numbers. What better consonance of Plato’s premise and Bitcoin’s?

Fides ex numeris. Write it out a hundred times!

Disclaimer: It has been said that the European philosophical tradition consists of a series of footnotes to Plato… That’s how foundational Platonic philosophy is. My treatment of this subject in this column is, inevitably, tremendously superficial, trivial… and eccentric, but that is unavoidable given the limitations of space, and the challenging of conveying clearly specialised ideas of tremendous scope to a general readership. Anyone wanting far more substantial treatment of Plato’s political philosophy may want to start off with Karl Popper’s The Open Society and its Enemies, and work his way from there. This column is a mere taste or impression, oh how Plato would have hated that!

Joseph Debono is a Blockchain/Emtech consultant for Zeta, a Financial and Corporate Service Provider based in Malta and the UK, and has been active in this space since 2016. He is also an academic researcher in Emtech, focusing on native fintech solutions and business innovations. He has contributed numerous articles, papers, translations to various fields of the Humanities and has co-edited two books. His latest publication, co-edited with fintech pioneer Patrick L. Young is “DLT Malta: Thoughts from the Blockchain Island” (ISBN: 8362627026). In a past life, he was a historian and classicist, passions for which continuously inform and inspire his life and mind.

Bitcoin remains in an area of indecision as it heads into the typically low volume weekend. It is currently trading at $43,000.

Ethereum experienced a slight relief bounce overnight, rising to $3,115 after dropping below $3,000 for the first time since September.

Bitcoin momentarily broke the $40,000 barrier for the first time since September as global markets slip amid a resurgence in the US Dollar.

Litecoin has been battered and bruised this week following a market-wide sell-off that has it fall to its lowest point since July.