BitMEX witnesses $225 million in long liquidations as BTC plunges to $6,400

During Bitcoin's sell-off this morning, crypto exchange BitMEX saw a single liquidation of $104 million as price crashed down from its recent $8,400 high to around $6,400

Bitcoin crashed to a low of $6,380 on BitMEX this morning as the original cryptocurrency lost over $10 billion in market cap during a period of flash liquidations on the exchange.

BitMEX’s price index is formed using a 50:50 split of the Bitstamp and Coinbase Pro BTC/USD markets. The sell-off seems to have been triggered due to a massive amount of BTC being sold all at once on the crypto exchange Bitstamp.

Bitstamp just got completely destroyed by the algo.

Really can't wait to see if they release a post-mortem on this. Looks like a 3600 btc sell algo was just wiping the book all the way down sitting on the ask side the whole time. pic.twitter.com/DEfULAfMSD

The cascade of sell orders on Bitstamp dropped the price index on the widely-traded perpetual contract on BitMEX, which led to an avalanche of long liquidations worth over $225 million.

The biggest single liquidation on BitMEX was over $100 million. Given the average amount of leverage recently revealed by BitMEX CEO Arther Hayes, we can speculate that a single trader lost up to $3-5 million if the position was leveraged between 20x and 30x. 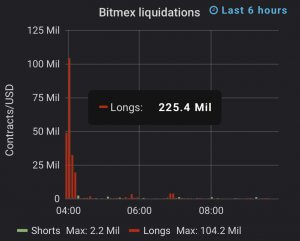 Following the flash crash, OKEx made the claim that it was the new “stable” futures market as its own futures product managed to trade above $7,000 while many of its competitors such as Huobi ($6,791) and of course BitMEX traded much lower.

The Malta-based exchange continued to reveal that the “24-hour trading volume of OKEx futures has reached $8 billion”, just a few days after BitMEX announced its own trading volume record of $10 billion a day. 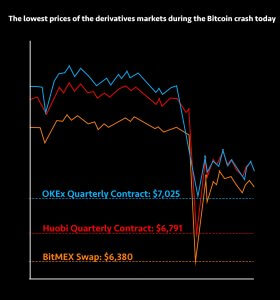 OKEx has recently promised to implement a comprehensive risk management system upgrade on its futures trading platform by the end of May. According to a press release shared with Coin Rivet, the exchange is “helping its futures market remain stable during market volatility”.

Given the sudden tumble in the Bitcoin markets, it’s hard to predict exactly what is going to happen next. However, one thing that most observers will agree on is that volatility and high trading volume are back following the renewed retail interest to make profits on the world’s biggest decentralised asset.

Kim Goulde: ‘I realised how globally impactful Bitcoin and other cryptocurrencies can be’

The Bitcoin Cash subreddits you need to start following

Bitcoin will provide an important “buy the dip” opportunity if it descends into the $9,000 region, according to former Bear Stearns risk analyst Tone Vays. He does, however, admit...

Bitcoin has suffered a 3.86% correction this morning on news that South Korean exchange Bithumb has been seized by law enforcement. The exchange is reportedly accused of selling native...

Bitcoin is beginning to build a key level of support above the $10,920 level after surging by 21.36% over the past week. The head honcho of cryptocurrencies has, however,...