Blockchain can save capitalism: find out how

In the second of his features, Pedro Febrero looks at how blockchain can save capitalism and lead to better redistribution of wealth creating a more Utopian society

How can cryptocurrencies expand our understanding of value and bring value to more people?

In order to change, we need to understand what to change.

When comparing economic growth, we tend to look at GDP statistics, but forget the real production value of an economy is measured in who performs those transactions and who ends up with that value.

We need to base our decisions on how greatly wealth is redistributed among its population.

Compared to the rest of the world, the US is doing poorly at the moment.

Scandinavian countries like Denmark, Sweden and Norway, and even the UK, have better wealth redistribution.

The governments tend to intervene in education, healthcare and welfare benefits. The worst part of this inequality is it was improving until the 1990s.

Then the top 1% were losing power while the bottom 90% were becoming richer.

A number of analysts, future thinkers, entrepreneurs and some progressive economics agree the destruction of the gold reserve and a shift to a fractional reserve bank system might have contributed to how things progressed. 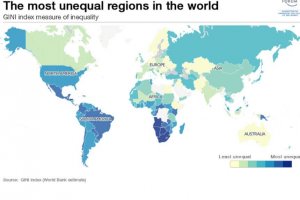 The huge debt produced due to fractional reserve banking led to a loss of USD purchasing power. Less regulation of banking meant more ways to be corrupt and abuse power.

Even a small country like Portugal seems to have found a more efficient way of redistributing wealth than the US.

I believe a more socialist approach is called for in the US.

Obviously, you wouldn’t discard capitalism because of bottlenecks. But what about ownership?

On countless occasions, it’s been shown capitalism creates incentives for people to be owners and create jobs, leading to economic growth and effective taxation.

My solution to the wealth inequality problem? A upgrade to the capitalist model, to improve value creation and distribution.


Can blockchain save capitalism?

If cryptocurrencies mean the digitalisation of virtually any asset and the creation of a truly decentralised, peer-to-peer, global monetary infrastructure, I can easily imagine a futuristic capitalist-based economy, where private enterprise has both for-profit and social goals at their core, due to the incorporation of monetary incentives, reputation systems and game-like mechanics into core business models.

With the creation, rise and adoption of Bitcoin and other P2P value-protocols, such as Ethereum, we now have tools to connect a digital currency to a specific product, platform, governance model or idea.

It doesn’t really matter how you apply cryptocurrencies, if your ultimate goal is to promote decentralisation, then that’s exactly what will happen.

Look at the World Wide Web.

Close to 30 years ago, people decided they wanted to have a way to distribute and decentralise information, so that anyone in the world could access it.

First we developed a full decentralised operating system, Linux, which today is the base for most android phones. Through mathematics, cryptography and network theory, people developed amazing P2P networks like Napster and Utorrent, sophisticated websites like Wikipedia and platforms like OSM, where anyone can maintain privacy and still create value through content creation or content sharing.

Has the dream of being able to share information instantly, not been achieved?

Last time I checked, we do have access to virtually any piece of information we desire, at the tip of our fingers.

How can we then apply all three of the above dimensions into blockchain-based enterprises? More however, what would happen if we did? How would these organisations differ from traditional companies? 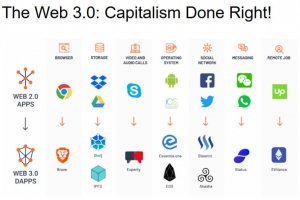 Right now there are hundreds of projects creating decentralised versions of known platforms as Google, Twitter, Facebook or Linkedin. Some projects like Steemit, The Brave browser or Wabi’s milk tracking app, already have deployed real-life applications running in a decentralised manner.

The trick for any product, platform or company creating a decentralised network is to properly implement incentives so that most benefits go to users.

Why wouldn’t you like to get paid for your online contributions? Or to share your data with third-parties? What if we start valuing everything that we do online?

If projects correctly implement this technology, we could see hardcore changes in how value is created and transacted, meaning, the theory of the firm and the purpose of organisations would suffer massive fundamental changes.

For one, in a completely decentralised and permission-less organisation, such as a DAO, virtually anyone could be an employee, as the only requirement would be to create value for the community (as contributors are automatically rewarded with tokens).

The reason why blockchain technology is needed won’t be truly understood by most until we reach the point when we don’t remember how it used to be without its existence – like the internet or mobile phones.

The blockchain we know today, as a database or a ledger used to store bitcoin, will change in the future years as more people create ways to decentralise value distribution.

The more we fight to keep it under a central authority, the harder it will be to leave that mindset.

If tokens can represent virtually anything, sooner or later companies will start tying those into their business models and shifting from gaining value from users to giving value to users.

As long as there is a token representation of a certain company, product or idea there are different ways to move from a centralised structure to a network, where all token holders benefit equally.

The Web 3.0 is nothing but a brand new way for organisations to reorganise resources, in order to give value back to users (the rightful owners of said value).

With the proper tweaks, we could achieve positive results redistributing wealth and reducing inequality.

And with the right set of incentives, gamification techniques and game-theory mechanics, we’ll create a world where people are directly rewarded by companies, through work, governance or rewards crypto-tokens, promoting a better redistribution of wealth.

Disclaimer: this article shouldn’t be taken as financial advisement; it represents my personal opinion and should not be attributed to Coin Rivet. I have savings invested in cryptocurrency so take whatever I write with a grain of salt. Do not invest what you cannot afford to lose and always read as much as possible about a project before investing.

Bringing the world under one arena: driving global sports brands and e-commerce

Sports has become a global enterprise. As a result of advancements in digital streaming, online chat rooms, and videogames, fans from even the most disparate parts of the world...

They say in business that your network is your most valuable asset. In the blockchain world, the Initial Coin Offering (ICO), the often speculative, independent and unregulated fundraising tool,...

Blockchain is transforming the supply chain and logistics industry

Managing today’s supply chains is no cakewalk. From producing goods to distributing them, it’s an overtly complex process. Depending on the product, the supply chain can stretch over thousands...