Non-fungible tokens have started the new year with incredible strength following a surge in volume and floor prices of leading NFT projects such as Bored Ape Yacht Club and Doodles.

The cumulative volume figures since January 1 now equal $750m – a figure which exceeds the estimated $700m of trading volume seen from January to June in 2021.

Further data from Rchen8 also shows that the volume since the start of the year has been some of the highest recorded since October and comes close to the August 29 volume record of $322m in one day. 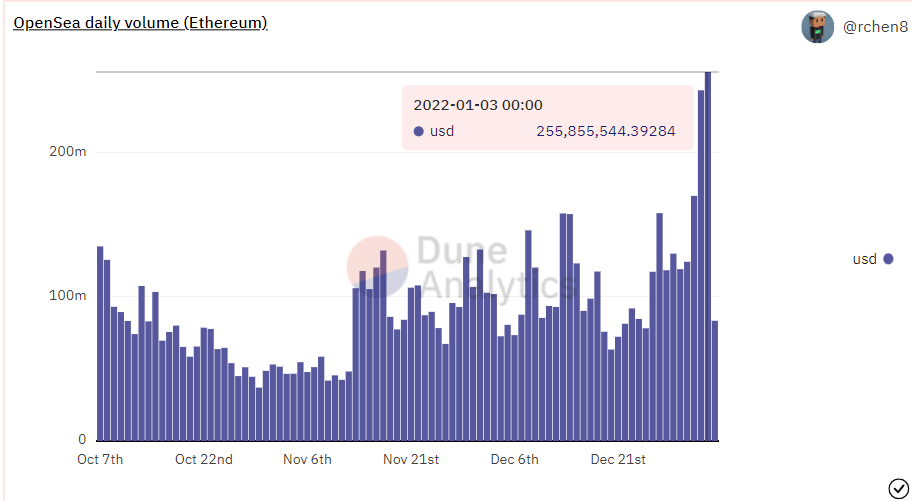 In addition, it’s now estimated that OpenSea saw more than $15bn of trading volume transacted through its market-leading platform in 2021 – an astonishing amount considering the relative infancy and maturity of the NFT space.

The latest spike in volume has been fuelled by a number of leading NFT projects seeing massive increases in volume and the floor price – the minimum price of an NFT from a collection – rapidly rising.

Bored Ape Yacht Club (BAYC) – which recently surpassed $1bn in total sales – and ‘sister’ project Mutant Ape Yacht Club (MAYC) have both seen recent surges thanks to a spate of celebrities and well-known figures including Eminem, Steve Aoki and Jimmy Fallon ‘aping in’ to the collections.

It’s anticipated that many are starting to buy in due to the imminent Q1 launch of a BAYC utility token reportedly dubbed ‘$APE’.

The minimum price of a BAYC NFT is now $275k

Their popularity has pushed them to the top of the seven-day volume charts on OpenSea alongside other popular collections such as Doodles, which has seen 7.6k ETH ($29m) in volume and a similar surge in floor prices thanks to its bright, colourful artwork and highly collectable and desirable nature.

Doodles NFTs are a collection filled with appealing pastel colours and a thriving community.

With large amounts of volume returning to NFTs following a short ‘bear market’ at the tail end of 2021, many are now convinced that the resurgence in volume and interest alongside the introduction of Coinbase’s native NFT marketplace in 2022 could bring new records to the space.