Brenna Sparks on cryptocurrencies, criticism, and her future

Coin Rivet recently spoke to Brenna Sparks about her wild ride in cryptocurrencies, how she has dealt with criticism, and what crypto can provide

After rising to prominence in the cryptocurrency scene in 2017 and 2018, Brenna Sparks is now one of the most influential people in the industry.

With a wide audience spanning different markets, the adult movie star is striving to promote self-sovereignty through the decentralisation that cryptocurrencies can encourage.

Coin Rivet recently had the chance to chat with Brenna about her role with SpankChain, her controversial pick as an influencer, and her views on cryptocurrencies in general.

You’re an advisor for SpankChain, what are its goals?

The goal is to create a dedicated ecosystem for the adult industry, free from censorship and free from discrimination.

The ones that understand this are out there, building a new path that goes around the current mess, and it isn’t only limited to the adult industry.

Have you noticed other industry workers getting involved or has the uptake been slow?

The industry is very quick to recognise the importance of cryptocurrencies. It’s not difficult for them to see the solution, unlike the average citizen.

What was the first cryptocurrency you bought? You were a fan of the Silk Road if rumours are to be believed.

Bitcoin was the very first cryptocurrency. And I was a fan of the Silk Road. It was very useful for people who didn’t have a dedicated weed dealer.

Has getting involved in cryptocurrencies changed your outlook politically or economically?

Very much. I’ve become a lot more libertarian. As far as economics goes, I follow the Chicago school of thought.

What does your involvement in cryptocurrencies look like? Do you trade and code or buy and hold? 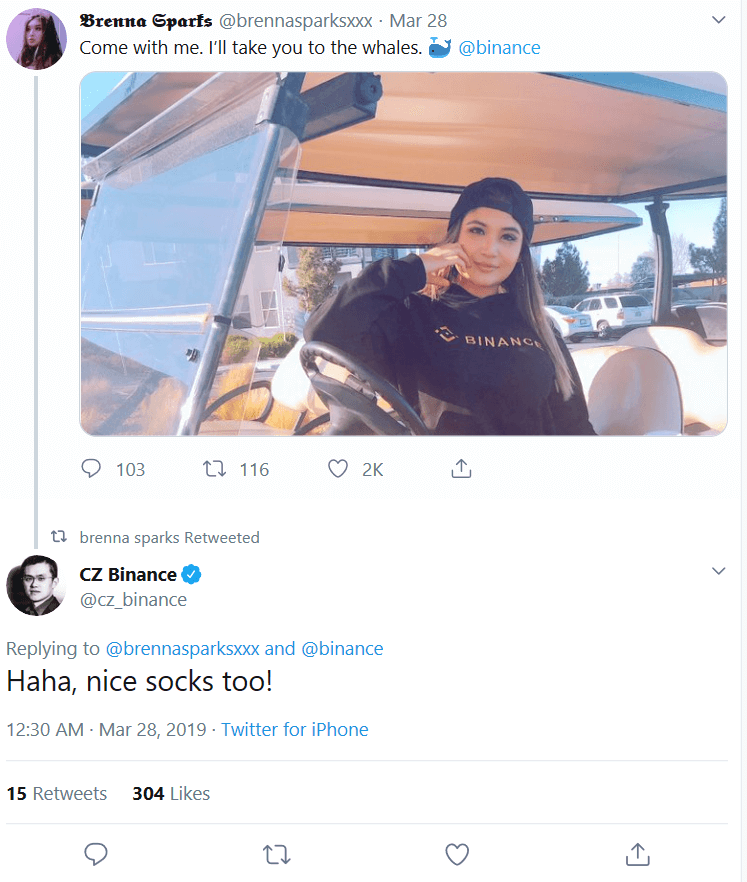 I think getting into crypto has got me close with many developers and has definitely sparked some real interest. It’s too soon to tell if I will do it long term, but so far I’m really enjoying it and learning about concepts I have never ever thought about before, as well as concepts that used to confuse me.

The feeling of getting smarter seems to be enough motivation. I’ve always liked the idea of being a nerd, so it’s likely I will be a giant nerd of something one day… maybe coding, or maybe something else. A nerd nonetheless.

What other industries do you anticipate cryptocurrencies will disrupt other than the adult industry?

I know this sounds a bit crude, but everything. We are talking about currency here, and there isn’t much stuff in this world that money doesn’t intersect in one way or another. Even the very nature of governance is changing with the advent of cryptocurrencies.

Real estate, retirement, insurance, health care, company funding, employment, banking, diplomacy, war, you name it – it’s all being re-evaluated. Nothing will remain the same. We’re truly experiencing something that has never existed in the world before, something that effects every human on the planet.

You’ve mentioned before that you fancy being a venture capitalist one day. Will cryptocurrencies help achieve these goals? And if so, what kind of industries would you like to invest in?

It was something that I played with, but if crypto gets to where I believe it will, I actually think VCs will become obsolete. Why on Earth would anyone want to give up portions of their company in exchange for money when they can fund it without giving up any percentage?

One very special thing that nobody seems to talk about is just how much collective support companies get in this space. I believe the future of companies will be very cult-like, where they have large followings that will assist in funding and any other additional support. The role of VCs will be a lot less noticeable than it is today. This is just my guess.

As for the industries I’m interested in, I’m most interested in the gaming industry. I think that space will have a huge positive impact and is still full of opportunity. A couple of projects that I’m watching closely right now are Enjin, Decentraland, and Theta. I also have some interest in VR, AI, and fog computing.

Has there been a particular highlight that has stood out since entering the world of cryptocurrencies?

The amount of money you can make (and lose) in this space never seems to have an end. A person has never experienced an emotional roller coaster until they’ve sat in this industry for at least two years.

CoinDesk nominated you as one of the most influential people in the industry for 2018. What was your reaction to that? How did you deal with the criticism that came your way from the nomination?

I was surprised and humbled. I really don’t think I deserve it, but hey! I don’t get to decide this. I’m very blessed for it, and it has brought me nothing but opportunities since. The criticisms were expected. It went a bit overboard when people began mobbing me and actually changed some deep philosophical views I had on free speech.

After experiencing mobbing, my belief in free speech was damaged pretty badly, and there is very little holding it up today. Now, I find it difficult to justify. It’s not okay to group up and hurt people in the name of free speech. That was a very big change on me for sure, and it didn’t come from reading a book or anything, but simply from experiencing the hurtful actions of strangers.

Networking! These next two years are all about networking for me. I want to develop great friendships and partnerships. I’ve gotten my recognition, and now I want to push it to the next level and start working with others.

Return of the alts: Bitcoin's dominance falls as altcoins rally

How smart contracts are used in administration