Can blockchain save capitalism?

It's been a harsh year for cryptocurrency prices, which have been falling since late January. But most cryptocurrencies are actually less volatile than traditional markets like stocks

Cryptocurrency prices, in general, have been falling from late January until now, with the usual ups and downs. At the moment most cryptocurrencies, especially Bitcoin, seem to be way less volatile than traditional markets like stocks.

If not only as an interesting tale to tell, I thought it was worth mentioning.

Nevertheless, as prices and technology rarely come hand-in-hand, during this period we’ve seen some conceptual improvements implemented, such as Ethereum side-chains and plasma or Bitcoin’s LN and Superspace.

Today I aim to shift the discussion towards economic concepts and how I believe crypto-projects could potentially leave a mark, in the upcoming years.

Has Capitalism Failed The World?

When I started studying economics, most economics were taught by comparing East and West philosophies. This is, what economic theory should drive the world forward? Capitalism or Communism?

Of course we now know there are plenty of alternatives which don’t focus solely on growth or on an egalitarian distribution of wealth, the two selling points of each school of economics.

Interestingly enough is the fact both philosophies teach important values about human behaviour, that can be extrapolated into new hypothesis and theories. The most important, to me, are:

Capitalism promoted the good use of both values, leading to unprecedented growth. Over the past 50 years, technology has grown exponentially, elevating society to a whole new level of consumption. People were able to find better jobs with higher salaries, hence becoming more comfortable day by day — as they could plan for the future, save up, go places, have food on the table and a house to live in.

In its essence, capitalists believe self-interest and individual utility maximisation to be the root cause of growth. If all people try to achieve what’s best for them, how can the economy ever fail?

The Journey Of Capitalism

In Europe and Canada, the picture is a little bit more colourful, as we see a mixture of capitalism and socialism, where the role of the government is intended to be more interventionist, in order to promote free (or near-free) public-goods, such as healthcare or education.

Capitalism and its variants are therefore characterised by:

Capitalism has its philosophical roots on the belief that the universe is a kind of soul-less Darwinian machine, which operates solely through the survival of the fittest and profits.

If “nature” is predatory, greedy, self-interested, violent, brutal, red in tooth and claw — then society should be too, right?

Of course, that sort of mentality also creates monsters. Some of the darkest capitalism tended to were increasing wealth inequality and citizens’ selfishness.

Side note: if we look at the bigger picture, in our 100,000 thousand and something years’ journey as humans, generally speaking, we have never lived in such a prosperous time like today, where access to income opportunities are far, far higher than ever before.

With massive growth we saw massive profits: huge corporations making not billions, but trillions of dollars in revenues. For the past 20 years, since the dot.com bubble, stock prices have been steadily rising.

Not only in the US, but globally as well. 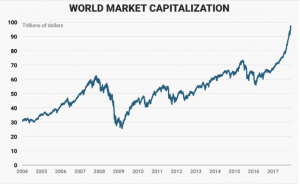 Interestingly enough, this massive economic machine doesn’t seem to be doing its job properly. For one, if we take into account (nowadays) about 50% of people in the US, and even less in most countries, own stock, who are these companies enriching? Plus, only about 10% of all Americas can truly be considered capitalists, as they create jobs.

The pressing problem with capitalism is that wealth is not being fairly redistributed. If you don’t believe me just take a look at some numbers and scenarios. They are indeed frightening, so beware.

It does pain me to acknowledge the system we’re living by today can potentially do more evil than good. And it is our greed, lack of moral standards, values and respect for each other that is allowing this tyrannical philosophy to flourish. At our core, I think we’ve mistakenly stopped caring about competing healthily, and focused only in our well-being and personal growth.

The richest, of course! 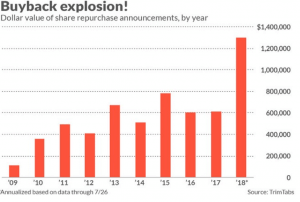 Before both the dot.com bubble and the 1929 crash, companies were promoting this sort of behaviour, as in buying-back massive amounts of stock to keep prices rising.

Thankfully, there’s plenty of data showing what usually happens afterwards, as money invested in buying back shares is not applicable to the real economy: there is no gain for employees, managers, customers or any other agent, except for shareholders.

If you’re wondering what can be done to mitigate those risks I hope you’re ready to think outside the box, as in my next article I will discuss how shifting targets from growth to wealth redistribution, might be an easier task to accomplish if we accept the decentralised nature of cryptocurrency and crypto-economics.

Disclaimer: this article shouldn’t be taken as financial advice; it represents my personal opinion and should not be attributed to BeingCrypto. I have savings invested in cryptocurrency so take whatever I write with a grain of salt. Do not invest what you cannot afford to lose and always read as much as possible about a project before investing.


Research: Why is it so important within crypto?

Blockchain training: Which organisations would benefit?

Prophets in the crypto space need to be removed

These days, we are constantly advised on the advantages of cryptocurrency as a form of payment – low transaction fees, increased security and an inclusive outlook – and how...

Facebook’s Libra announcement sent ripples through the crypto community, boosting Bitcoin’s value over $12,000 for the first time since the dizzying heights of early 2018. As the US Senate...