Many in the industry are suggesting the end of 2022 could be a reckoning. Coin Rivet looks into what could make it a reality for Ethereum

Ethereum and Bitcoin have battled it out for the number one and two spots in the market cap rankings for what seems like forever in the crypto industry.

Now, with new bullish narratives emerging for Ethereum, many are pondering whether Ethereum can finally flip Bitcoin in market cap and take the number one spot.

Also known as ‘The Flippening’, Ethereum surpassing Bitcoin’s market cap would be a monumental turning point in the cryptocurrency industry.

Coin Rivet looks at whether Ethereum can complete the move in 2022 and what would need to happen to make it a reality.

According to data from Blockchaincenter, the market caps of Ethereum and Bitcoin are currently at a 51.9% ratio. When this reaches 100%, they will be at the same market cap.

This shows that Ethereum has to almost double its current market valuation whilst taking into consideration further upwards price action from Bitcoin. 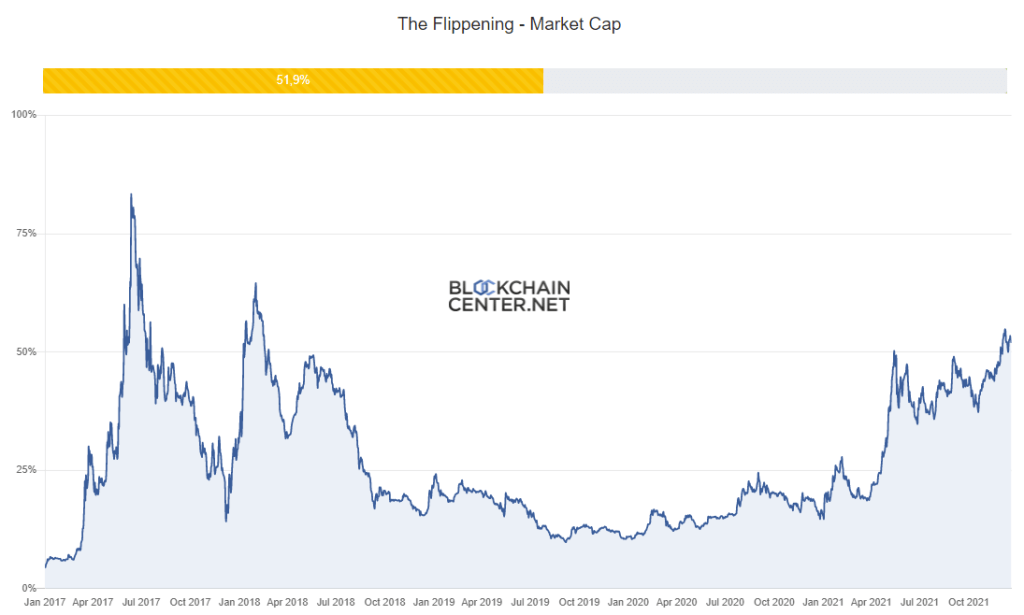 So far, according to additional data, Ethereum has flipped Bitcoin in two metrics – on-chain transactions and transaction fees generated.

These remain two valuable metrics as they can signal the greater and more widespread use of Ethereum within the cryptocurrency industry.

Ethereum is also catching up in other metrics too, including active addresses on each blockchain and the aggregated trading volume on exchanges.

Bitcoin has remained as the number one asset by market cap due to its scarce nature, first-mover advantage, brand recognition and its adoption as a ‘store-of-value’ for both retail and institutional customers.

Bitcoin has held the top spot since its inception in 2009 and didn’t face any major competition until inverse price action in June 2017 took the ratio to a record 82%.

The incredible rise of NFTs and DeFi spurred waves of investment into Ethereum, leading some in the industry to believe that Ethereum can flip Bitcoin by the end of 2022.

Ethereum’s infrastructure and enterprise adoption have also helped establish itself as the market-leading blockchain whilst its upcoming move to a proof-to-stake network is stoking even further speculation on its capabilities.

With both assets now more in the spotlight than ever, the key decider in ‘The Flippening’ could now be the amount of adoption each asset gets from outside markets.

In the past, price action in both assets has been influenced by the announcement of partnerships, investments and ‘mainstream’ adoption of the asset through payments or similar.

Whilst ‘The Flippening’ is unlikely, barring an industry-changing partnership or development, stranger things have happened in the world of cryptocurrency.

One bullish catalyst from Ethereum, such as its transition to a proof-of-stake network or high-profile partnership, could bring the ratio ever closer to 100%.

Conversely, widescale investment, outside market influence or partnerships for Bitcoin could send the ratio even lower.

Now, with both Bitcoin and Ethereum established, market-leading assets, a flip will likely become more difficult to achieve as market caps increase and prices begin to reflect the fair market value of both assets.

Footprint Analytics: The state of NEO five years on