The auction, which ends in six hours, has so far raised 215 ETH that will be contributed to the conservation of the national park

A collaboration between Christie’s and OpenSea has so far helped Virunga National Park raise almost a million dollars to preserve the ‘biologically diverse protected area’.

Featuring a “cutting-edge selection of collectables and new 1/1’s”, the auction hosts NFTs from renowned artists including Tom Sachs, 3LAU, an Ether Rock and two ‘CyberKongz‘ NFTs – gorilla-based collectables that are contributing towards the funds for Virunga Park.

The park is home to a third of the world’s endangered mountain gorillas and benefits from donations and proceeds to help protect “Africa’s most biodiverse protected area”.

CyberKongz are a collection of 4,760 pixelated apes that feature an array of attributes and accessories and allow holders of ‘Genesis Kongz‘ to earn passive income through the ‘$BANANA’ token.

The CyberKong NFTs up for auction include Genesis Kong #46 and Genesis Kong #201 – a special ‘Skeleton’ edition from the collection. 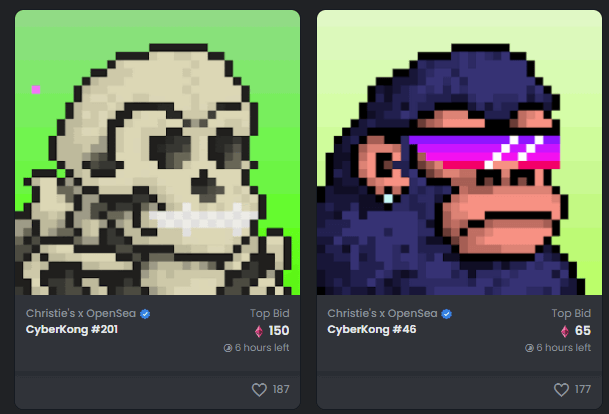 The two CyberKong NFTs up for auction

So far, with six hours remaining in the auction, the two apes have raised 215 ETH – all of which will be donated directly to Virunga National Park.

The remainder of the NFTs, available through the auction feature an array of limited-edition artworks curated by Christie’s Specialist and Head of Digital and Online Sales Noah Davis and Crypto Collector and Curator Ronnie Pirovino.

The auction house has become a mainstay in NFT culture thanks to recent high-profile auctions including the ‘No Time Like Present’ auction -which included six CryptoPunks and four BAYC NFTs – alongside hosting Beeple’s latest artwork ‘Human One‘ that sold for $29m.