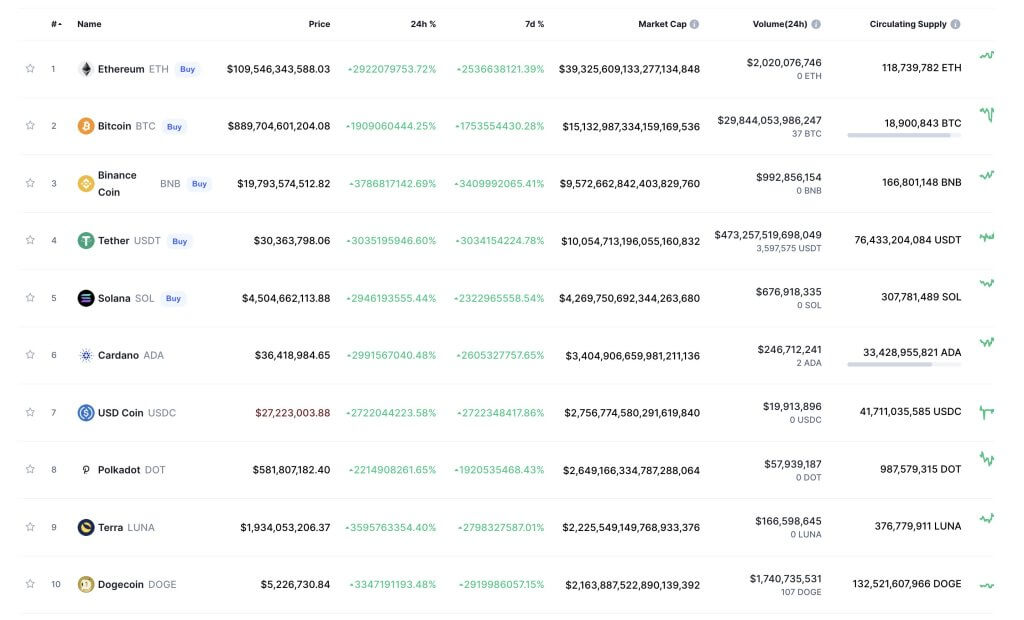 Following the glitch, many users took to Twitter to ‘flex’ their portfolio value on the website, which allows users to track their balances, gains and losses using an inbuilt portfolio tracker.

CoinMarketCap reacted lightheartedly to the error, asking its audience how it felt to be a trillionaire for a few hours.

How did it feel to be a trillionaire for a couple hours?😂

CoinMarketCap continued its playful approach when it jokingly said that users should “cancel your Forbes interview” following their newfound ‘paper’ gains.

The memes also continued to flow on Twitter, including jokes about quitting jobs and a supposed look into future prices of certain assets.

However, despite the fun and games, some other users and industry experts lamented the price glitch. Chainlink co-founder Sergey Nazarov commented on the glitch and the emerging need for more decentralised data points to correctly determine accurate pricing.

“This recent glitch is exactly why blockchain applications and smart contracts need to use decentralised oracle networks like Chainlink,” he said.

“Relying on a single oracle, or a single source of data, is a recipe for disaster that undeniably puts user funds at risk. Because Chainlink uses a decentralised network of oracle nodes, each pulling and aggregating data from multiple data sources, the trusted answers about price data that Chainlink provides across all of DeFi remained accurate and unaffected.”

crypto.com CEO Kris Marszalek also noted that his platform was affected by the price glitch through a “display-only issue“. He went on to say that crypto.com is “working on removingCoinMarketCap’s unreliable price feed” from its platform.