Community-owned Vertcoin is back on the scene

After catastrophic 51% attacks two years ago, the VTC community faced a decision - re-build, shill, or quit. They chose to re-build

Vertcoin – a name many know, yet seldom hear – has undertaken a two-year-long community-led revamp aimed at putting the cryptocurrency back at the forefront of the industry.

Founded all the way back in 2014, Vertcoin (VTC) is an iron-clad, battle-tested veteran of the crypto world – a decentralised community-owned cryptocurrency, and the result of two hard forks guided by the same philosophy…

Keep Satoshi’s original dream of a decentralised digital currency that maintains 1 GPU = 1 vote in case for Vertcoin, but was originally 1CPU = 1 vote.

Bitcoin (BTC) initially maintained this vision, but the onset of ASIC miners led to a divergence between the profitability a regular person could achieve mining BTC on their GPU and a new elite-class of miners with extremely powerful custom-built ASIC technology that could outperform GPU miners.

This led first to the creation of LiteCoin (LTC) through a code fork. But this too eventually fell susceptible to the ASIC onslaught, driving a new fork and the creation of Vertcoin in order to preserve viable GPU mining for everyday people. 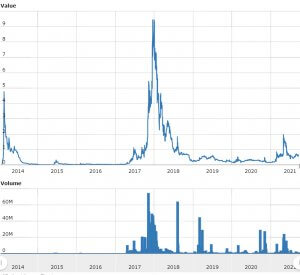 It rose to prominence in the market, enjoying a comfortable and well-deserved top 30 position during the 2017 bull run and, along with the rest of the market, it slowly bled out into the long crypto winter.

2019 would become a catastrophic year for the project, with two major 51% attacks successfully deployed against the network sending investors fleeing from the project and dropping the price of VTC through the floor.

The attacks also lead to a spiral of exchange de-listings which further sunk trading volume and interest.

With the project in absolute crisis and no leadership team at the helm, the Vertcoin community faced a critical decision.

They could try and undertake a complete re-build, they could pump-and-dump the coin in an exit scam, or they could abandon Satoshi’s dream altogether. The community chose to re-build.

The community chose to re-build

What followed was a herculean voluntary effort by a decentralised group of unpaid developers and miners that sought to fix the problem of 51% attack vulnerabilities and preserve Satoshi’s dream.

The project went silent for two years as the mantra became “development > hype”.

During this time, the developers, with the unwavering support of the core community, worked tirelessly to devise, create, test, and implement an entirely new mining algorithm; one that would completely disincentivise the use of ASIC hardware on the Vertcoin network.

The innovative decision was taken that the best approach was the simple one. Instead of making it difficult for ASIC miners, they simply capped the amount of hash power a single device could contribute – thus excluding them from play.

But amid this work on the Vertcoin algorithm, a period of soul-searching had taken place within the Vertcoin community which resulted in a desire to make mining as simple and accessible as possible, in alignment with the idea of a truly decentralised currency open to everyone.

This led to the simultaneous launch of One Click Miner, which enables anyone with a GPU more powerful than 2GB to begin mining their own VTC with one click.

But then the community hit a wall: their stoic period of rebuilding in silence had led the project to fade into obscurity, and no media outlets provided any coverage of their new upgrades.

A look inside Vertcoin

Coin Rivet was invited to take a deep dive into the Vertcoin community to get an inside look at how things have progressed and the outlook for the future of the seasoned Vertcoin.

It’s clear this is a project that was hit hard by the spate of 51% attacks in the early days of cryptocurrency, and this really became apparent during the recent 2021 bull run which saw VTC get next to no traction.

One community member – RandomlyCoding – was quick to explain how the attacks have come to be perceived within the Vertcoin community.

“I think more about early tech adoption – there may be 10,000 coins out there but very few will last the distance,” he said.

“Vertcoin has been tested by fire, by a 51% attack that it has recovered from and learnt from – other coins may not be so lucky.”

The hacks on the platform in 2019 were shocking for investors. They were spooked – especially in the aftermath of the first crypto bull run. Nowadays, hacks are surprisingly commonplace in the crypto community and there are now steps taken to survive them.

In the case of Vertcoin, the early wake-up call was a blessing. The cryptocurrency can now boast being one of the safer networks in the space.

But there still remains serious questions about the relevance of the project – especially now it has become a low-ranked, obscure project in a very competitive crypto space.

Community member LuckyJJ10 tried to get across the philosophical relevance of the aging coin.

“It isn’t meme powered. To me it’s just Bitcoin but truer to the original vision of work distribution, or again, the original idea of Litecoin that was also abandoned,” he commented.

The community also explained that the VTC revamp allowed the project to become regulator-proof, with the algorithm specifically designed to avoid classification as a securities asset.

Some in the community believe that Ethereum 2.0 and the hard fork to proof-of-stake will present a wave of GPU miners that could potentially turn to Vertcoin as their new focus due to a credible track record of 8 years ASIC resistance.

PrestigiousAD6328 said that “Vertcoin stays true to Satoshi’s vision of network security via decentralisation and easy mining, at all costs. This is what gives Vertcoin its real value”.

When Coin Rivet conducted a sentiment survey, overall it seems a majority of the community remain optimistic for the coin.

As I finish writing this piece I’m left with an endearing sense of a decentralised community built on the original Satoshi dream of cryptocurrencies, working together at their very best to try and reignite a fading project.

While many in the crypto world chase money, the members of this community are here for their vision and in a crypto world dominated by flashy ICOs and big marketing companies, the simple honesty and comradery of this project is perhaps its greatest strength.