Continual sideways movement without a decline? We’ll take that!

DOMINIC FRISBY: "And there she goes - $5,800 has given way in Bitcoin. The bear market is back on. Take cover!"

It’s Groundhog Day in crypto. One day the sector moves up by a little. The next day it declines by a little. The net result is sideways. That’s a good. Every week the market moves sideways is another week it doesn’t move down. That’s what you want to see. It’s another sign the bear market is coming to end.

Let’s start with Bitcoin. The current price remains close to $6,300. Here’s the 12 month chart. You can see how it’s basically been going nowhere since August, one mini spike aside. The sloping blue line is the 55-day simple moving average. It’s flat. The red lines define the triangular range within which Bitcoin has been trading as this bear market has evolved. As long as support at $5,800 holds, we are ok. Your risk is mapped. 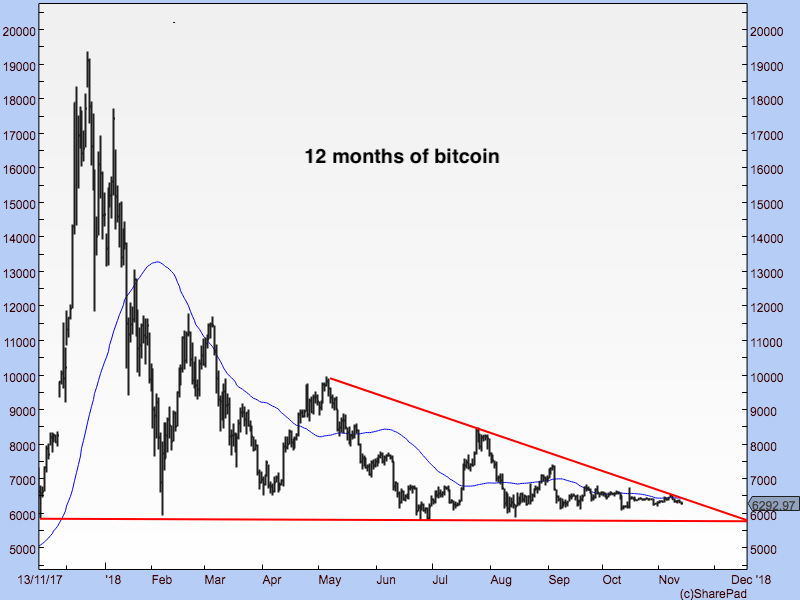 Next up in Coin Market Cap’s hierarchy of magnitude, we have Ethereum.

Current price is around $210. The medium term trend (see the blue, 55DMA) has now flattened out. Thank the lords. We even have a slight uptrend with a identifiable level of support (see red line). Thank the lords even more. Things are no longer quite so grim in Buterinland. The red uptrend defines your risk. 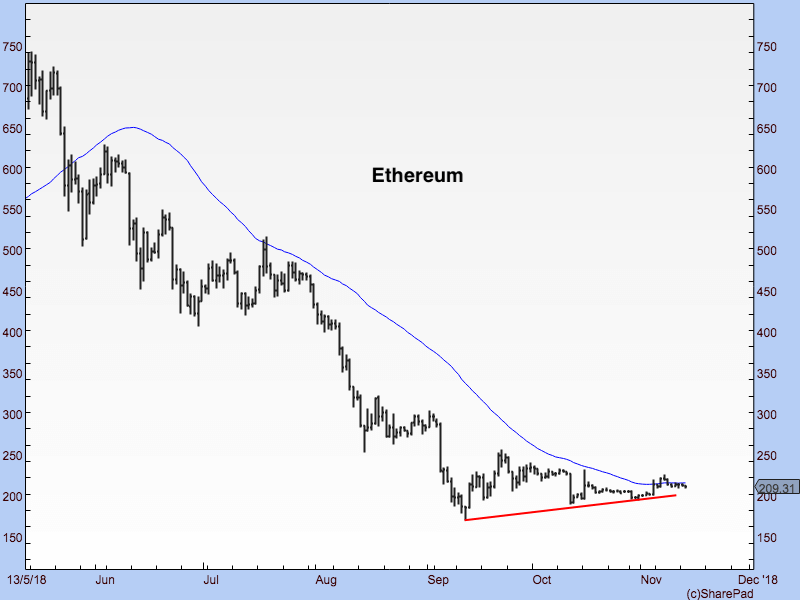 And if you want to see the billionaire genius Vitalik Buterin make a grand entrance doing his best C3PO impression, here’s the link to click. It’s a shame Vine doesn’t exist any more as this would be a beauty.

To be honest, that Vitalik Vine is a lot more entertaining than the current technical trends of the crypto markets!

So to EOS, Litecoin, Tron and Cardano, which we present as one, because, basically, the charts are the same. 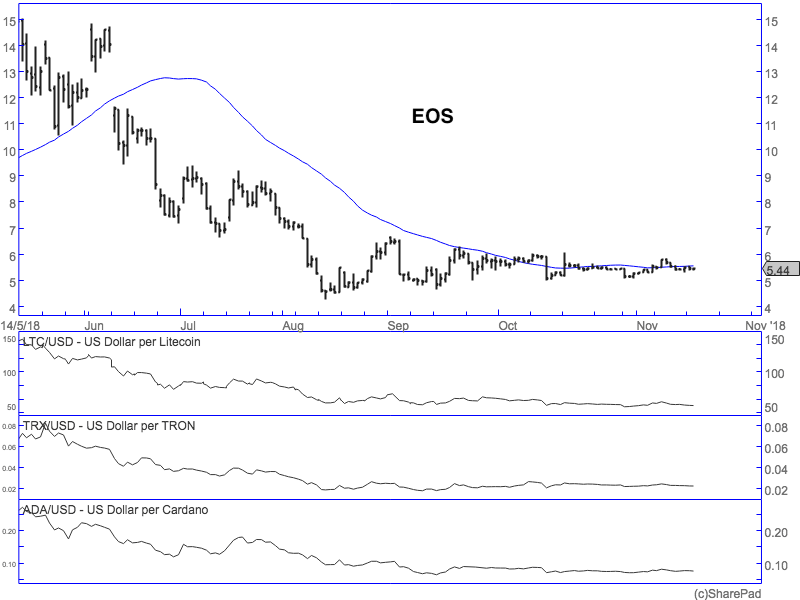 Flat is good. The longer the sector stays flat, the bigger the next run will be. We want speculators to lose all interest in crypto and go somewhere else. Then there is a lot of room for them to come back in, when the time comes.

So to Ripple. I may not get it, but who cares? Ripple is on a trajectory of its own at the moment. $0.052 is the price, and look at that 55dma. The medium-term trend is very much rising, folks. 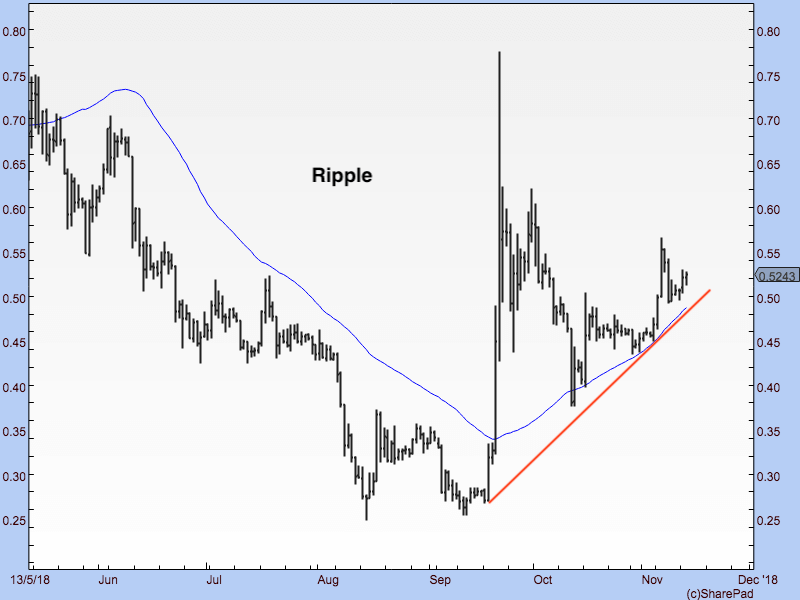 I have to say this is a bit too ‘vertical’ to be long-term sustainable in my mind, but what do I know? The important thing is that the trend is up.

Ripple was once $3.80, so there is a long way to go before it reclaims it’s old high. But a trend is a trend. Don’t knock it. And, since September, Ripple has been very much the coin to own.

So Stellar, next. Stellar is the fifth largest coin by market cap. It has a total valuation close to the $5bn mark. Its current price is 26 cents. And it has been one of the stand-out performers in this bear market, displaying considerable relative strength. Where others have declined stellar has gone sideways. That is impressive.

The trend, whether you measure it in lines of 55-day moving averages, is up. 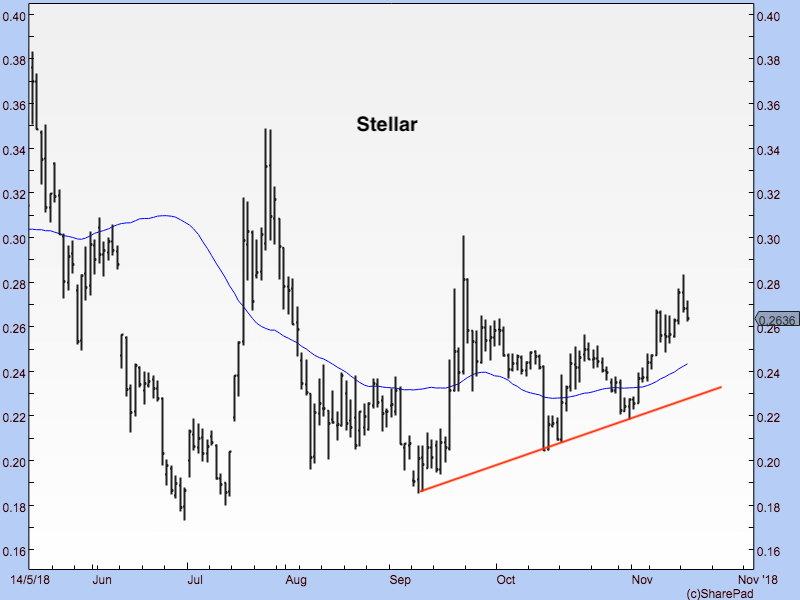 As you probably know Stellar is doing a big air drop for those who have wallets with blockchain.info. It’s giving away $125m of coins. It’s an effective way of getting a large number of new punters into the coin, all at once. The more people using it, the bigger the tech will grow.

My colleague Darren Parkin has covered this – you can read his article here. 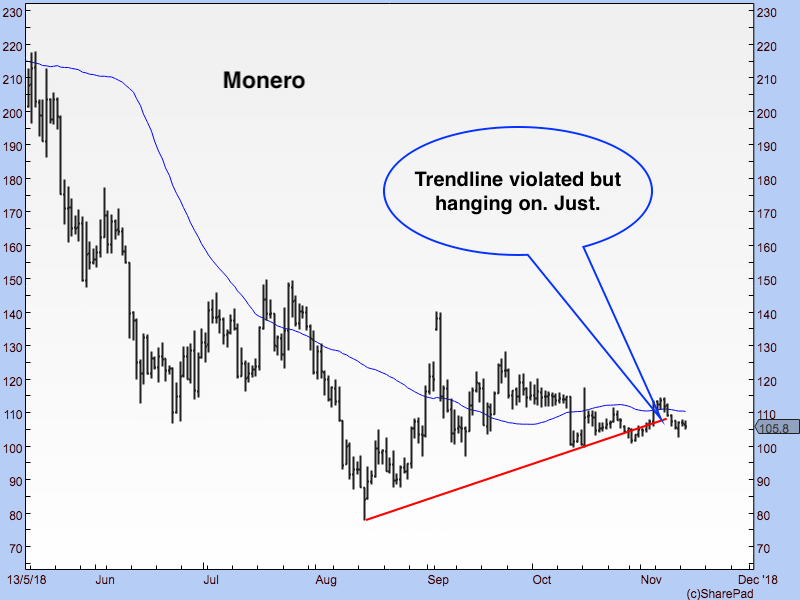 Next to my favourites, the privacy coins. Monero first. Its market cap stands at $1.7bn, making it the ninth largest coin in the rankings. Its price is $105.

Monero put in a good September-October move, which made it look like one the leaders in the sector. Unfortunately, that move ran out of steam a little and that rising red trendline was actually violated (see chart below).

It has hung on forever. The 55DMA is now flat. So, really, what we are seeing is fairly typical for the sector.

When will the market start ascribing a premium to Monero for its privacy qualities?

It’s doing what pretty much every coin is doing – flattened out and rising slightly. Though that blue 55DMA is sloping down a little which is a concern. 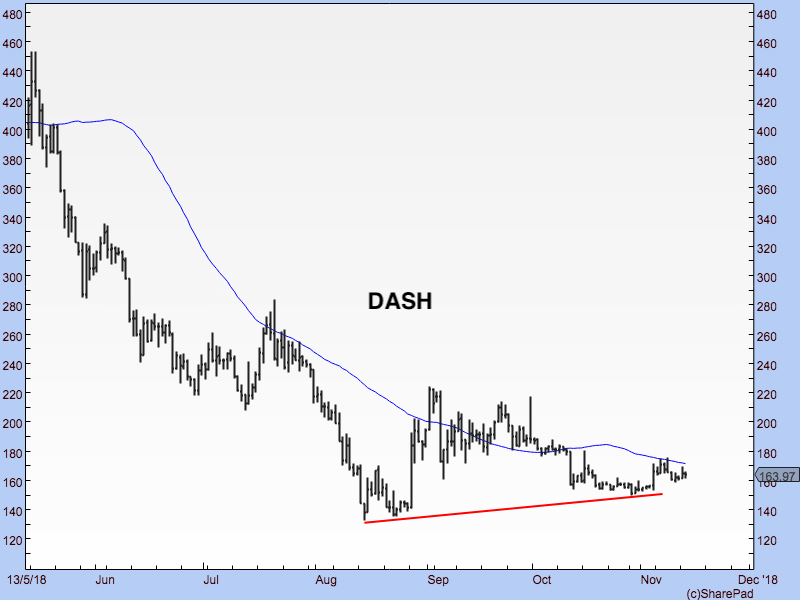 And here’s the other privacy coin, Zcash. A market cap of $690m and the 19th largest cryptocurrency. There have been lots of interesting developments to Zcash lately, but the technical action is the same as Dash and the majority of altcoins. 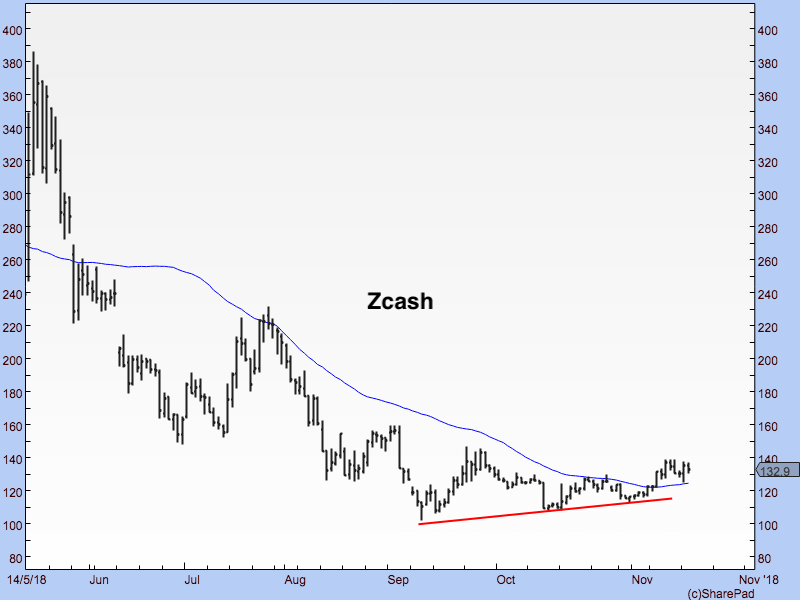 As you’ve probably heard, there’s been quite a lot of in-fighting in the Bitcoin Cash community. Bitmain and Roger Ver have taken one side of the argument, and Craig Wright – who claims to be Satoshi Nakamoto – and Nchain on the other. I heard the argument billed as the “fight over which is the real fake Bitcoin”, which made me laugh, though that is perhaps a little unfair. I’ve always rather liked Bitcoin Cash – and indeed I’ll be talking about it at the Coingeek conference later in the month. In any case, there is to be a fork tomorrow, so make sure you have your Bitcoin Cash stored away from any exchanges otherwise you could get hit in the crypto cross fire.

I don’t like to see these arguments, but Bitcoin Cash is behaving well from a technical standpoint. The news of the upcoming fork is priced and the market has had quite a rally on the back of it, trading as high as $650 last week. The 55dma has now turned up.

The current price is $540. It’s the fourth largest coin by market cap, and its market cap is about $9.17bn. 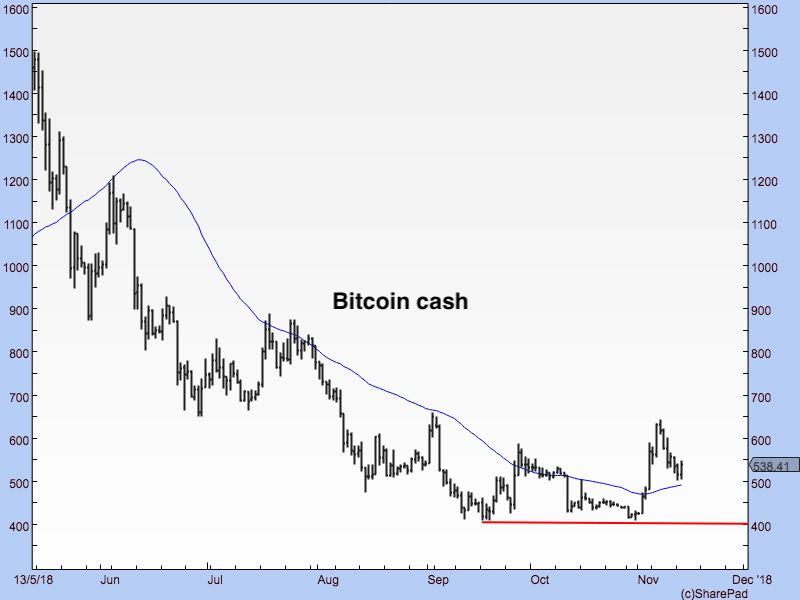 And there she goes. $5,800 has given way in Bitcoin. All those red uptrend lines I identified in the charts above have been breached. Groundhog Day is over. The bear market is back on. Take cover.

Dominic Frisby is author of the first (and best, obvs) book on Bitcoin from a recognised publisher, Bitcoin: the Future of Money?, available from all good bookshops, and a couple of rubbish ones too. Dominic is director of Cypherpunk Holdings (CSE:HODL), a company set up to invest in privacy-related technologies. Follow Dominic – @dominicfrisby