Coin Rivet recently attended the CoinFest UK conference in Manchester where we had the chance to speak with Trevor Jones – an artist who infuses his paintings with augmented reality (AR) to craft a unique story for each of his works.

Speaking with Trevor, he gave us insights into the creative process, his biggest inspirations in both the art and crypto spaces, and his upcoming series of paintings.

From political portraits to crypto

Trevor went to art school as a mature student – attending his foundation year in 2002 before completing five years at the Edinburgh College of Art and Edinburgh University before graduating in 2008.

He has since been creating his paintings for the last 11 years. Trevor describes himself as a “traditional painter” in the sense that he creates his paintings on canvas using oil, but he also adds technological aspects.

He says: “Each one of my paintings have video content or digital content that can be accessed through the painting itself, through augmented reality.”

It hasn’t always been easy though. He revealed how in the first four years it was difficult to make a living. However, in 2016, he created a series of political portraits on the US elections – including paintings of the now President Trump and Hilary Clinton.

One individual bought all 10 paintings in the series, as well as four from the current crypto-inspired series.

This gave Trevor “an opportunity to step back and start making decisions” to allow him to live his dream.

Trevor explained how he went about blending AR into his work: “It’s been a long process. It’s been about six-and-a-half years working with augmented reality and so it’s kind of gone back and forth sometimes.”

He works on themes and ideas, which at present is the crypto space. He’ll create a series of paintings and with each one he’ll develop an idea of what the video content will be. 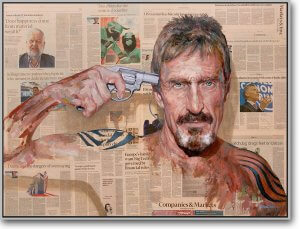 The Eccentric by Trevor Jones

Trevor first heard about crypto in 2015 and then again around mid-2017 when it began to pick up some serious traction in the media. He was already creating AR-infused paintings, and so the technology interested him.

“The idea and concept intrigued me, and I thought maybe I can invest some money, and I started to invest money and realised it was a crazy volatile market,” recalls Trevor.

“You know it gave me seven months of an emotional rollercoaster to develop paintings from.”

The emotional rollercoaster Trevor experienced “massively” aided his creative process. He directed our attention to one of his paintings – The Ecstasy – which has a sister painting called The Agony.

He describes how each one has video content “that represents the highs and lows of the crypto world with regards to investment”.

Interestingly, The Ecstasy is based on a 15th-century sculpture by Gian Lorenzo Bernini called The Ecstasy of Saint Teresa.

He revealed that The Ecstasy is one painting he really enjoyed creating because it brought together “the old and the new”.

In particular, he enjoyed “reinventing it, giving it new meaning through cryptocurrency”.

Trevor has another painting in the series called The HODLer which represents the virtue of patience, stepping back, conducting due diligence, and having trust in something.

He has also painted popular figures in the crypto space including John McAffee, Vitalik Buterin, and Brian Armstrong. 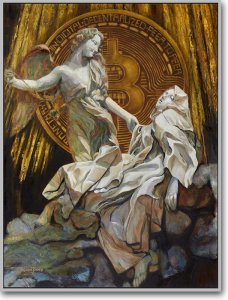 The Ecstasy by Trevor Jones

The art establishment tends to be anti-change

Coin Rivet asked Trevor whether this unique blend of art and crypto could be something of an artistic movement in the future, to which he replied:

“I think art is always changing, I think the art establishment tends to be quite anti-change believe it or not.”

However, he does think that within the next five to ten years, AR will be everywhere, “including teaching children in elementary school – it will become a part of their lives, just like the internet”.

He speculates that artists graduating in the next ten years will likely be dabbling with the technology, and perhaps there might be a revolution after that.

Trevor’s first foray into the world of art and tech began in 2012 with QR codes. He thought it was “super cool” because at the time many artists around the world weren’t using it.

He built an online platform where other artists could upload their work and those paintings “became a window to another dimension of art”.

“That was my first foray into technology and using it as a window for people to dive into the final form or the inspiration or the history.”

Back then he thought he would need to get on top of the technology quickly before everyone else did. Yet even now he is one of the few UK artists integrating technology into artwork. 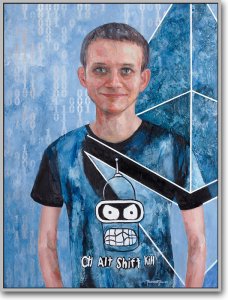 The Genius by Trevor Jones

Trevor revealed that Picasso is one of his art inspirations while David Hockney is another.

He is a fan of Hockney because “he’s got to be in his 80s now, and he’s continually reinventing himself with interesting technology. He was using his iPad to create artwork when he was in his 70s, which is really cool.”

Trevor also likes to look at many contemporary artists “for more inspiration to see what these amazing artists are doing today in the world”.

Trevor’s next series will consist of 15 paintings, and he hopes the exhibition will be held in London by the end of the year.

He explained to Coin Rivet that he will be taking “Picasso’s cubist style from the early 1900s and then reinterpret the cryptocurrency logos into a cubist style painting”.

As with his current series, “each painting will have digital content which is scannable”.