Cryptocurrency scams: The different variations of scams in the industry

There are many types of cryptocurrency scam. Here, we will go through a list of some of the most well known

There is no denying that there are a lot of cryptocurrency scams. Sometimes these accusations are overblown by people who have little knowledge of the industry, but where there is smoke, there is usually fire. With regulators and lawmakers scrambling to catch up, the industry has attempted to self-police itself, but sometimes without much luck.

The first attack vector for those who are anti-Bitcoin isn’t necessarily a scam, but rather illegal activity. The Silk Road has become infamous in the crypto space, with founder Ross Ulbricht currently serving a life sentence without a chance of parole. The Silk Road was an online marketplace accessible through The Onion Router, an anonymous internet browser. The website was similar to eBay in some senses. There were buyers and sellers with ratings and products that could be bought. The main difference was that these products generally consisted of illegal drugs.

The Silk Road was the catalyst for Bitcoin’s initial rise in value. For the first time, Bitcoin was being used as a currency to purchase goods. The success of The Silk Road was quite spectacular. During this time, blockchain analysis companies had yet to be created. This meant that despite Bitcoin being pseudonymous, it was extremely difficult for the security agencies to track the buyers and sellers of the illegal goods. The Silk Road was not a scam per se, but it was the first instance of creating a culture of suspicion from the mainstream media that is still prevalent today.

Another cryptocurrency scam that Bitcoin initially made easier was money laundering. Again though, this has become much harder in recent years. But there are still a couple of simple tactics that criminals could use to help ease their money laundering. One is using mixing sites, which help to hide transactions on the public blockchain. Another is using privacy-based cryptocurrencies such as Monero or Zcash, which could further help hide the movement of transactions.

Even if this stealth movement is achieved, then exchanging the cryptocurrency for fiat remains an issue. One option is to use an OTC counter. This would prove difficult though, as those that broker such a deal would usually follow KYC and AML processes. Using a less-than-reputable exchange could be a possibility as they might not have as strict regulation or follow KYC/AML procedures.

Recent news coming from Japan has shown a 1,000% rise in the use of cryptocurrencies in money laundering, although this still only makes up just 1.7% of all money laundering cases in Japan for the year 2018. Supporters of cryptocurrencies are always quick to point out that money laundering is typically still completed through the usual avenues, such as offshore banks. There are of course major corporations throughout the world who use complicated international tax laws as well to reduce their taxable income. Amazon paid no federal income tax for the year 2018.

Some cryptocurrency scams are more blatant. These take the shape of cryptocurrency coins or tokens. Ponzi Coin (yes, that is the actual name) managed to reach highs of $0.20 despite the whole premise of the coin being a Ponzi scheme. The coin has since obviously died and the creator has left the website highlighting that it was always intended as a joke. Ponzi Coin is just one type of Ponzi scheme that has infected the cryptocurrency space. There are numerous MLM-type schemes that have proven very difficult to shut down.

Pump it and dump it

Pump and dump schemes are one of the oldest cryptocurrency scams, and they still show no signs of slowing down. They are not unique to cryptocurrency though – they were immortalised in Scorsese’s The Wolf Of Wall Street, which followed the life of Jordan Belfort and Stratton Oakmont. Pumping and dumping with cryptocurrencies is much easier than the extravagant heist pulled off by Belfort. This is due to lax regulation and the illiquidity of many cryptocurrencies, meaning that manipulation is much easier. Belfort has gone on to say that the cryptocurrency industry as a whole is one big scam. 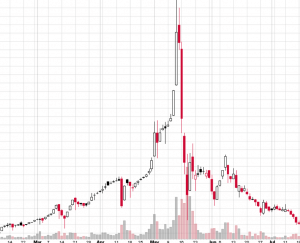 A typical pump and dump chart

Despite the world of finance being riddled with cases of illegality, the cryptocurrency industry still has some way to go in an effort to reduce some of the scams noted above. With improving technology regarding blockchain analysis, being able to scam the authorities and other citizens is becoming harder. As much as many in the industry are adverse to regulation, until we see some in one form or another, cryptocurrency scams will continue. Whilst they can be illegal, the immorality of them is just as big of an issue. Often it is normal citizens who are the ones that suffer most from such endevours.