Decentral America: Inside the frontier of Bitcoin adoption

Carlos Antonio Rejala Helman, the Paraguayan Deputy Leader, is the latest Latin American statesman to act in the unfolding Latin American cryptocurrency race. In a series of tweets, the politician expressed his support for the introduction of legislation in July that seeks to legalise Bitcoin (BTC) as legal tender.

Trailing in the visionary footsteps of El Salvador’s President Nayib Bukele, Paraguay is keen to avoid being left behind in the race to legalise BTC as a legal tender and attract international cryptocurrency and crypto mining operations. El Salvador provides an inspiring model for the adoption of BTC, cryptocurrency, and blockchain technology – and Paraguay’s deputy premier takes note reportedly referring to himself as the Paraguayan Bukele.

This is Paraguay 🇵🇾 July we legislate! #Bitcoin https://t.co/4e4wH7uDrl

This isn’t Paraguay’s first move in its national adoption of BTC, in a world first, the country settled an export deal debt for agricultural products and pesticides with Argentina’s Exporta Simple program using BTC on the Bitmex Exchange in 2019. BTC was chosen as a stable and favourable alternative to fiat due to Argentina’s high inflation level of 47% in 2019. This ground breaking cross-border transaction legitimised cryptocurrency as a credible tender for international trade.

Helman has provided very few details surrounding the specifics of the proposed legislation, but reports suggest that the bill could involve a substantial partnership project with PayPal – this stands to illuminate the scale of  Paraguay’s ambition in the crypto industry space; and represents a powerful play in Latin American Bitcoin race.

Paraguayan’s business community have moved quickly in support of the legislation proposed. Grupo Cinco, one of the country’s largest entertainment companies, announced that they will work to accept cryptocurrencies across their continent-spanning chain of bars and nightclubs (plans include: Bitcoin – BTC, Ethereum – ETH,  Chiliz – CHZ, and Shiba Inu Coin – SHIB).

Whilst Covid-19 has accelerated the adoption of BTC as an inflation hedge at both an institutional and national level – the real driving force underpinning these moves in Latin America has been the crypto rhetoric by the Chinese government driving Chinese crypto miners overseas.

This has presented a sudden and very significant opportunity for Latin American companies to work creatively to attract much needed foreign direct investment (FDI) from the cryptocurrency industry. The small economies that move quickest on cryptocurrency and blockchain adoption stand to capture substantial GDP growth. However, the potential benefits of cryptocurrency adoption in Latin America extend far beyond simple economic growth – in a continent characterised by uncontrolled inflation; BTC is digital gold.

It would be easy to imagine BTC and cryptocurrency as the first blockchain race on the continent; but Latin America has already been in the midst of a silent blockchain race – the competition for blockchain enterprise software dominance.

But what are other Latin American governments doing to keep up in this race? 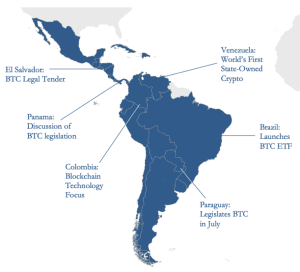 El Salvador is leading the pack following the Miami Conference, under the leadership of the BTC evangelist President Nayib Bukele – plans are well underway for the legalisation of BTC as tender; alongside additional planning aimed at attracting fleeting Chinese crypto-wealth and crypto-mining through the provision of cryptocurrency visas and an appealing crypto-tax environment.

The #BitcoinLaw has been approved by a supermajority in the Salvadoran Congress.

Strike CEO Jack Maller revealed plans at the Miami conference for an adoption partnership between the BTC payment company and the El Salvadorian government, with the firm set to begin construction of a Zap crypto and blockchain innovation HQ (additionally partnering with blockstream) to aid the government’s efforts.

Bukele has highlighted the importance of cryptocurrency for banking the bankless; with 70% of El Salvadorian’s lacking access to conventional banking – the emergence of BTC offers an accessible solution. This is a pressing issue in many developments paradigms across the informal economies of the global south.

The opportunity available to El Salvador cannot be downplayed; if the country can capture even 1% of the BTC marketcap this would represent a 25% growth in the national GDP – and with 10m new crypto users in the country and an increasing proportion of the $6bn in annual remittances sent from El Salvador’s large emigrant community transacting through cryptocurrencies – adoption seems inevitable.

The El Salvadorian President has also announced the availability of volcanic geothermal energy source opportunities as a green energy solution for the crypto miners; leveraging the country’s active tectonic plates as a unique advantage against a backdrop of fears surrounding the environmental impact of the crypto industry.

Soon, that well is going to look like this…

And half a mile from it, the #bitcoin mining facility.

Waking Up To The Bitcoin Race: Mexico

In Mexico, legislators are beginning to wake up to the crypto race on their doorstep – and reports are beginning to emerge of Mexican adoption of BTC as a legal tender. Alejandro Murat Hinojosa (Governor of Oaxaca) and Indira Kempis Martinez (Senator for Nuevo Leon) have stepped forward with a bipartisan regulatory proposal – with both figures posting images on twitter with laser eyes (a symbol of support for BTC adoption).

I will be promoting and proposing a legal framework for crypto coins in Mexico's lower house #btc pic.twitter.com/zwhYOZ7KAg

The Mexican regulatory proposal put forward focuses on the legalisation of BTC as legal tender, alongside a larger legal framework aimed at helping to regulate the adoption of cryptocurrencies more broadly, these proposals are due to go before the Mexican Chamber of Deputies (the lower house in their bi-cameral system) soon.

As the second-largest economy in Latin America the adoption of BTC and cryptocurrencies by Mexico would represent a significant and massively influential step forward in the international acceptance of crypto adoption, legitimising the move and mounting pressure on other large economies to participate.

The cryptocurrency was launched for fuel purchases in response to uncontrolled inflation in the bolivar fuerte and fuel price volatility. However, PTR became a political weapon in President Maduro’s struggles against United State’s sanctioning. The cryptocurrency is mandatory for fuel payments in Venezuela and has also been used for port fees. In 2020, 15% of all fuel payments in Venezuela took place using the Petro.

Colombia is another regional economic power moving to take a position in this rapidly unfolding crypto boom, and represents a substantial amount of global trading volume – with reports suggesting the country accounts for 11.3% of global volume on some exchanges. The country also boasts the highest number of BTC ATMs in Latin America with over 60.

The Superintendencia Financiera de Colombia (SFC) poses a potential stumbling block to the adoption of BTC and other cryptocurrencies, in the past the regulatory agency has published guidance explicitly stating that BTC is not a recognised tender. However, with their neighbours racing to provide alluring regulatory environments, the SFC have begun to take notice announcing a regulatory sandbox for crypto start-ups to test transactions within.

Furthermore, the Colombian government seem to have their eyes firmly set on the potential of blockchain technology as a high-tech industry that can be drawn in by opportunities. As part of this initiative the government have invested $6m into a scheme called SoftisTICA in order to encourage enterprise and entrepreneurship in the blockchain space.

New on the block: Panama and Brazil

Known for its prominence in financial services, Panama could be the next Latin American country to legalise bitcoin as legal tender.

The Panamanian Congressman Gabriel Silva tweeted suggesting that he will put forward legislation in July aimed at facilitating the adoption of cryptocurrencies and creation of a low-tax environment to draw in crypto investment. The Congressman hopes this will help future-proof the Panamanian financial services industry; and assist in a broader drive towards developing high-technology industries within the small country.

Further reports suggest that Bitcoin and cryptocurrencies are a big topic of conversation amongst political and diplomatic circles in Brazil, and many analysts expect to see similar regulatory proposals emerging soon. This follows the launch of Brazil’s first BTC ETF.

Adoption by a major BRIC country such as Brazil could represent a huge normalisation of cryptocurrencies on the international stage. Amongst BRIC countries this would be especially influential as it would provide an alternative pathway to adoption – away from the Chinese, Russian and Indian bans, and controversial CBDCs.

A challenge to the Washington Consensus?

Rapid regional adoption presents a significant dilemma to the traditional international monetary order – and Bretton Wood’s institutions (BWIs) such as the World Bank and International Monetary Fund (IMF) are beginning to formulate their responses.

The IMF has already warned about potential legal issues with the regulatory plans proposed following El Salvador’s move to make BTC legal tender, and there are big question marks hanging over the World Bank’s stance on cryptocurrencies.

Needless to say, the way in which these institutions choose to approach these regional moves towards adoption of cryptocurrencies will be critical in determining the success of these ambitious proposals. But there is good reason for the BWIs hesitation; the adoption of BTC as a digital gold and as an alternative to the USD presents a massive upheaval of the international monetary order and reduce the institutions influence in the region.

This is compounded by a recent U-turn in May by the Reserve Bank of India on a decision which ordered lenders to stop doing business with cryptocurrency exchanges and technology companies, highlighting a potential changing attitude surrounding adoption in another influential BRIC nations.

The Future of Cryptocurrency Adoption

As global concerns grow about the environmental impacts and volatility of crypto-markets it’s clear there are still many barriers to overcome before we see a mass-scale move towards adoption; but the future is looking bright.

In the United States the 2021 SEC regulatory agenda made no mention of cryptocurrencies which is encouraging, and furthermore the Facebook Diem project announced plans for a stablecoin in May which many analysts expect to become the official CBDC of the Unites States.

Latin America’s cryptocurrency race holds the solution to many of the region’s big challenges – it offers an easy and accessible way to provide digital finance reliably to those without bank accounts, it provides a secure and direct cross-border solution to the problem of remittances from the region’s many diaspora communities, it offers an effective way to hedge unstable inflation rates, and a powerful new opportunity for GDP growth.

These benefits aren’t exclusive to the Latin American continent and can be extended across the global south within many contexts of informal economies and bankless rural populations, and these regulatory proposals mark a new exciting way forward for small countries seeking to accelerate their growth and build a strong foothold in frontier technology industries.

On a larger level, global adoption offers a revolutionary new way of conducting cross-border trade and transactions, in the instance of Latin America the annual remittances from the continents emigrant citizens is estimated at $96Bn by the World Bank, and cryptocurrencies are already informally used on a large-scale through informal WhatsApp merchants. In June 2020 Venezuela received roughly $4m in cryptocurrency remittances through WhatsApp.

The settling of an export debt using BTC between Paraguay and Argentina in 2019 also offered an exciting glimpse into the potential use of cryptocurrencies in international trade, and this is a vision being recognised in China.

These views are reflective of China and Russia’s desire to safeguard their monetary sovereignty and avoid further Dollarisation of international trade. CBDCs sat within a globally agreed regulatory framework with suitable foreign exchange mechanisms and responsible capital management offer a potential solution to their predicament.

Overall, one thing is very certain; the immutable long-term independent value of Bitcoin as a ‘digital gold’ means adoption is inevitable – and Latin America is stepping forward and leading the way in realising this future.

Grayscale looking to add 13 additional assets to its portfolio