Different coins, same story: Downtrends across the board as the bear market strikes back

DOMINIC FRISBY: "There is not a lot to get excited about in the land of crypto prices this week, but there is plenty of cause for concern"

There is not a lot to get excited about in the land of crypto prices this week, but there is plenty of cause for concern. The December relief rally proved anaemic, and crypto prices are once again drifting lower back towards their 2018 lows.

Let’s start with Bitcoin. $3,560 is the price and its market cap is $62.4 million. From a technical point of view, it remains in a downtrend. The 55-day simple moving average (55-DMA) – the blue line in the chart below – remains our ever-reliable guide. As predicted a fortnight ago, it marked the point at which Bitcoin’s relief rally ran out of steam.

I can’t start getting bullish about Bitcoin until we start seeing this moving average flatten out and start sloping up, with the Bitcoin price sitting above it. That’s the technical action you see in bull markets. What we have at present is the reverse of that.

Of immediate concern is the fact that since December, each high has been lower than the last (see the red arrows in the chart below). Each low has been marginally lower too. That action portends the resumption of the bear. A move below the December lows at just above $3,000 can be seen as confirmation.

For now, you can tenuously make the case that as long as Bitcoin holds above $3,000 (where I have drawn the dashed red line), we are in a bottoming process, but I’d prognosticate that $3,000 is less likely to hold than not. 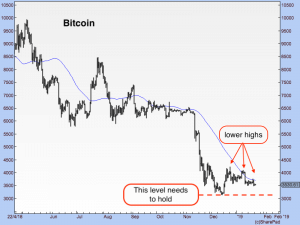 Ripple remains at number two in the market cap stakes. Its price is $0.31 and its market cap is around $13 billion. Despite holding above its summer lows at around $0.25, and thereby displaying some strength relative to other cryptos, the 55-DMA (the sloping blue line in the chart below) has resumed its grip and Ripple is in a clear downtrend too.

You can, again, make the case that as long as $0.25 holds, Ripple is OK. But I find it hard to draw positives from this chart. The trend suggests Ripple is heading lower. 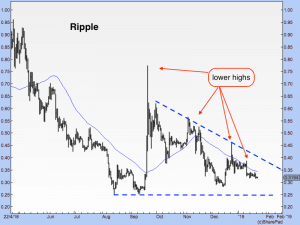 Different coin, same story. Though Ethereum actually got above its 55-DMA this past month, it has slid back down, and both the Ethereum price and the moving average are drifting lower. The downtrend is clear, with each interim high lower than the last.

The line in the sand, as I see it, for anyone wanting to take the bullish side of the argument, is $80.

Ethereum’s current price is $117. Its market cap sits just below Ripple at $12.3 billion.

And so is the technical story the same across the sector. Name your coin and I’ll tell you what is going on. The price is now drifting lower after its December bounce, but we are still sitting just above the December lows. The broader trend is down. The 55-DMA is sloping down. The last high was lower than the one before that. And so on.

There is one exception to all this, however, and that is TRON.

Tron is “dedicated to building the infrastructure for a truly decentralised internet”, according to the TRON Foundation. Sounds impressive, huh? It is now the ninth biggest coin in the sector with a market cap of $1.7 billion. Its coin, TRX, is trading at around $0.02.

The decentralised web is surely where we are going, but when I watch introductory videos that say things like “the future is here”, my alarm bells start ringing. It’s vacuous, futuristic marketing guff.

Alarm bells or not, you can’t argue with the chart, which has bucked the trend of the sector. 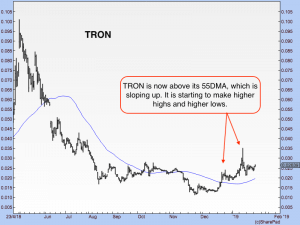 Tron, if I understand it correctly, is aiming to disrupt the content and entertainment sector. Content will be shared via its blockchain peer-to-peer network and distributed storage technologies. Thus can content creators receive revenue directly from their users and consumers, with sites such as Facebook and YouTube disintermediated.

My techno-geek mates do not rate the technology at all, but my mole at the recent summit in San Francisco said it was the most organised conference he has ever been to. Among other things, the famous basketball player Kobe Bryant was speaking. What on earth is Kobe Bryant doing speaking at a crypto conference? I can’t help wondering, and again this has the alarm bells ringing. The signs are here of a lot of style over content. 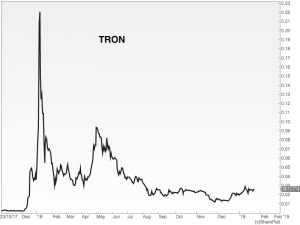 It is hard to know whether this latest move has been driven by slick marketing (in which case, beware) or genuine technological progress, but a coin that is bucking the sector is not to be sniffed at.

Speaking of bucking the sector, the two new privacy coins on the Mimblewimble blockchain – Grin and Beam – have seen some interesting price action. I’m hearing of Grin trading hands for as much as $20 and as little as $2. The mining costs (hash rates) have been surprisingly high, and this has been put down to surprisingly large amounts of venture capital wanting in on this particular game at this early stage. It’s too early for any technical analysis, but we are watching all the same. This is an exciting project.

Until next week, folks…