American DJ Steve Aoki has entered the metaverse by inviting the ever-expanding Sandbox community to become his ‘neighbour’ within the virtual environment.

The DJ, who has recently began sporting a Bored Ape Yacht Club NFT as his Twitter profile picture, invited users to the land sale with a tweet saying “won’t u be my neighbor???” to his 8.2m followers.

From the playhouse to the Metaverse, join tomorrow's LAND sale and become @steveaoki's neighbor!

Part of an expansion of Snoop Dogg‘s native plot – the ‘Snoop Dogg Mansion‘ –  ‘Snoopverse Wave 2’ will enable owners of the land to participate in concerts and interactive experiences with the DJ and have the bragging rights for a somewhat prestigious piece of digital land within The Sandbox.

The plots of land are also located close to the land occupied by Supducks, an NFT project featuring a colourful selection of 10,000 ducks.

The five plots are now open for auction on OpenSea, with bids ranging from $11k to $80k already placed on the highly-desirable ‘parcels’ of land. 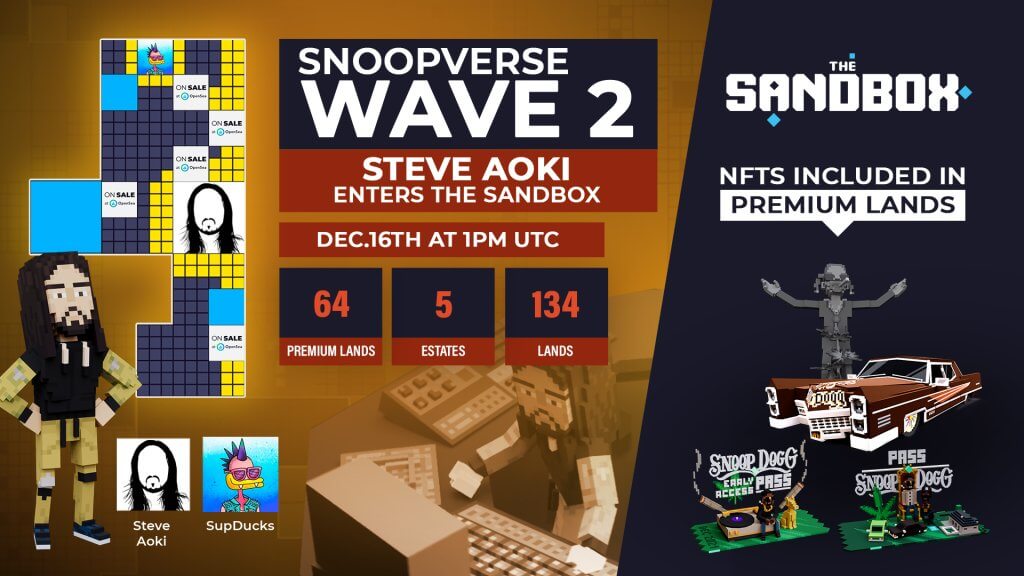 Much like the three plots that each sold for a collective $1.23m in ‘Wave 1’ of Snoop Dogg’s land auction, Aoki’s land auction is expected to fetch a higher price from bidders based on the location of the plots and their proximity to ‘Aoki’s Playhouse’.

Aoki’s venture into the metaverse follows in the footsteps of Snoop Dogg, who revealed his ‘mansion‘ in September alongside the lead of global brands such as Adidas Originals and others interested in owning and expanding into ‘digital land’.