People are now able to use Dogecoin to pay for some merchandise on the Tesla website, as confirmed by Elon Musk.

This isn’t Musk’s first internet-breaking tweet regarding Dogecoin and cryptocurrency but it’s one that’s followed through as several items including a ‘cyberwhistle,’ a ‘Giga Texas’ belt buckle, and a ‘cyberquad’ is now available to purchase with Dogecoin. 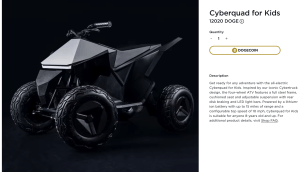 Musk once again caused the Dogecoin price to spike, as it’s currently up 13.8% in the last 24 hours, according to market data from Coin Rivet.

It was only in December 2021 when Musk tweeted that Tesla will accept Dogecoin as payment for merchandise and while many believed it to be smoke and mirrors from the billionaire, he stayed true to his statement.

The meme coin currently sits as the 11th biggest cryptocurrency in the world but is within touching distance of Polkadot in 10th, according to data from Coin Rivet.

While it’s uncertain at this moment in time whether Musk will decide to make Tesla vehicle purchases with Dogecoin, this is a huge step for the altcoin which will look to cement a top 10 status as a cryptocurrency before the year is out.

Identity is Fundamental , Credit is the Pass