DOMINIC FRISBY: "My big picture theory is that we will see something of a rally to the $5,000 area - and possibly even the $6,000 area - before Bitcoin has another major correction and comes back down to retest the December low at $3,200"

Hello and welcome to this week’s round-up of the latest price action in the crypto markets.

Starting with Bitcoin, I’m encouraged by the recent action. We have had a minor sell-off over the past four or five days, but that was kind of expected. As outlined last week, there is some resistance in the $4,000-$4,200 area (see the red shaded area in the chart below) and Bitcoin, now at $3,900, has simply retreated from that technical level. At this stage, I do not think there is anything to be concerned about.

In the three months since the December sell-off bottomed at $3,200, we have had a nice gentle uptrend in place. The January-February low was higher than the December low and, so far, these March lows remain higher than last month’s lows (see the black arrows in the chart below). That may change, of course, but higher lows equal uptrend. That is good.

Bitcoin could actually pull all the way back to $3,600 and the current trend (as identified by the rising blue line in the chart below) would still be intact.

In addition, Bitcoin has now got above its 55-day simple moving average (DMA) – the blue sloping line in the chart below – and both that and the 21DMA (the red sloping line) are sloping up. That is also indicative of an uptrend. 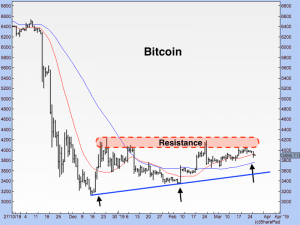 My big picture theory – and I stress it is only a theory – is that we will see something of a rally to the $5,000 area – and possibly even the $6,000 area – before Bitcoin has another major correction and comes back down to retest the December low at $3,200. That would come later in the year.

The big question then would be whether that low holds. We would want to see it hold, of course, and then we would have a nice technical base on which to stage the next move upwards. Markets correct in both price and time. While I think an 85% correction from the highs in a speculative asset like Bitcoin is probably enough, I’m not convinced crypto winter has gone on for long enough yet. We probably need 18 to 24 months.

That is all just a theory of course, based on previous bear market experience. And every bear market is different. For now though, the main takeaway in the short-term price action is that we have a nice little uptrend in place. What I also like about this uptrend is that barely a soul is talking about it. It’s a stealth rally. They are the best kind. It means the noisy people have not come on board yet. There is still plenty of room for them to join.

The uptrend I have described in Bitcoin can be seen almost across the board in crypto. Ethereum is number two by market cap, having recently usurped Ripple. Litecoin is now number four, having almost tripled since its December lows. EOS, Bitcoin Cash, and Binance Coin are at five, six, and seven and Cardano is at 10. All of them are displaying good uptrends – higher lows, rising moving averages – all the things you look for.

Litecoin and Binance Coin have been the real winners. Binance Coin was at $4 in December. It’s now quadrupled to $16. Last week it touched $22. That actually concerns me. Those kinds of rises are a little too much for a man who’s looking for a stealth uptrend.

It has not all been jam, however.

Ripple has rolled over and is back near its December lows. But Ripple is often out of sync with the rest of crypto, so there’s not much to see there.

TRON also looks like it’s rolled over. It’s worth glancing at the chart actually because it is a textbook example of how you don’t want the moving averages to be aligned.

The price is below the red line (21DMA) which is below the blue line (55DMA). The trend – as identified by the blue channel – is very much down. 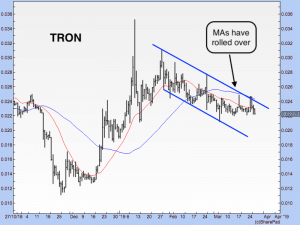 I am only talking about short-term moving averages here, so things could easily reverse, but I would be a short-term seller rather than a buyer of this chart. (Full disclosure – I don’t own, nor have ever owned, any TRON.)

TRON is another one a bit like Ripple which is its own particular animal, so in the greater context of this stealth uptrend, I wouldn’t be concerned. What does concern me is the excess in Binance Coin and to an extent Litecoin. We just want quiet appreciation at this stage, not jackpots.

So that’s where we are folks, and that is my big picture. Now we just need the markets to do exactly the opposite of what I’ve just outlined. Because that’s what markets do to loudmouths like me. They humiliate those who try to second-guess them!

Have a nice week, folks, and I’ll be back with some more analysis of price action in a week’s time.