Down down, deeper and down: The crypto market downward trend continues

DOMINIC FRISBY: "The direction is down, the trend is down, and down is where we are heading"

Welcome to another edition of Coin Rivet’s weekly horror show, otherwise known as my technical analysis of the crypto markets.

The direction is down, the trend is down, and down is where we are heading.

Here’s the long-term log chart with the support areas in shaded red boxes.

I’ve identified these areas purely on the basis of previous price action – pivotal price points in other words. I know it’s “too simple”, but I find it works. 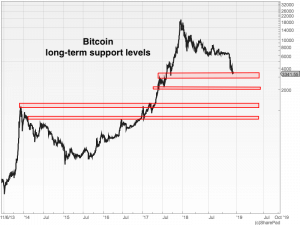 Here are those same price levels, except I’ve zoomed in a little to a three-year chart, so you can see the price areas a bit more specifically. 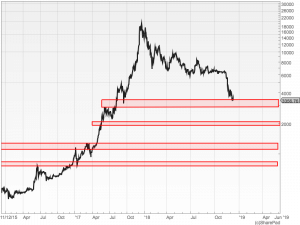 The next box below that is around $800. I doubt we will get that low, but hey, this is a bear market. Anything is possible, particularly when you’re washing out the excess of a year like 2017.

In the short term, the issue for Bitcoin is the trend. It’s going down. Worse than that, it’s capitulating. The bounces are anaemic. Each low is lower than the last. It’s not worth even drawing trend lines on the chart because the descent is so vertical.

The falling off a cliff metaphor is overused in technical analysis, but that is just what Bitcoin did last month. 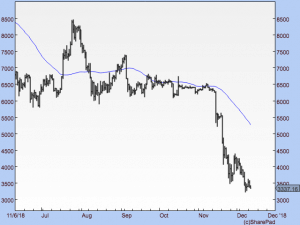 Applying the same logic to Ethereum next, here we see a long-term log chart with some horizontal red lines at previous pivotal price points.

Ethereum’s current price is $88. The overall market cap is just above $9bn. 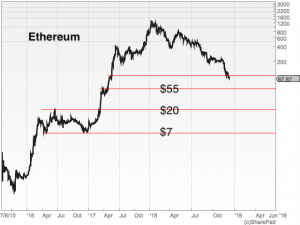 You may think my potential targets of $55, $20, and $7 are too low, but I was projecting $100 when we were closer to $200, so do not underestimate what is possible. This is a market that is in capitulation mode. It’s prone to extremes on the downside as much as it is on the upside.

In the short term, Ethereum is doing the same thing as Bitcoin, only worse.

Here’s six months of Ethereum. It’s not hard to see which way the trend is going in this one. 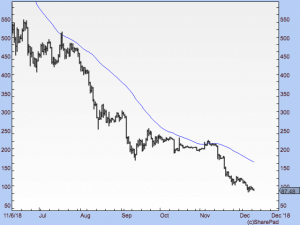 At some stage, it will rally back to the 55-day simple moving average (the blue line) – 55DMA. If it does, short it again. The 55DMA has been a great guide.

Just because a market has fallen 90% doesn’t mean it can’t fall another 90%. I’m certainly overstating things, but you get my point.

I’m afraid the story is the same across the crypto markets. It is sector-wide. No major coin has been spared.

Ripple is the only coin trading above its September lows, but it is also heading straight down and, at $0.29, it’s a long way from its $3.80 highs at the peak of the bull market. 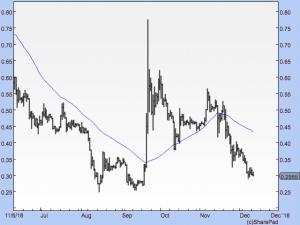 Stellar, with a market cap of $2 billion, is now the fourth largest coin by market cap. Like Bitcoin, it held above support through 2018 while all about it was falling, but that support has now too given way. It now sits at $0.11. 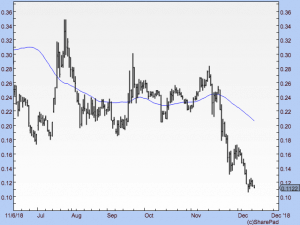 Bitcoin Cash has fallen off a cliff since the split with Bitcoin SV, which looked, for a moment, like it might buck the sector-wide trend, until that moment quickly passed. Between them they have a market cap of $3.2 billion (which would actually make them the fourth largest coin), with Bitcoin Cash at $102 and Bitcoin SV at $90.

Here are the three of them. 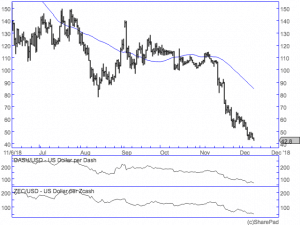 This is how DotCom investors must have been feeling in late 2001. Who knows – my uber negativity might mark the low. I rather expect we won’t see that until some time in the first six months of next year though.

The DotCom bear market did end eventually, but not until a lot of people lost a lot of money. But what followed the bear market proved – as with most bubbles – that the underlying story was right. The internet really did change the world. Railways did the same. Nearly 400 years on from tulips, the Netherlands remains at the centre of the international flower industry. Crypto is going to have a huge impact on the world. Coming up soon, there will be investment opportunities akin to the Nasdaq in 2002, and real companies such as Amazon, Apple, and Google, which made amazing gains for their investors.

Dominic Frisby is author of the first (and best, obviously) book on Bitcoin from a recognised publisher, Bitcoin: the Future of Money?, available from all good bookshops, and a couple of rubbish ones too. Dominic is director of Cypherpunk Holdings (CSE:HODL), a company set up to invest in privacy-related technologies. You can read more of Dominic’s contributions to Coin Rivet here. Follow Dominic @dominicfrisby

All pain, no gain: Declining trends continue despite weekend bounce