Emin Gün Sirer: “I am the grandfather of the UASF movement”

Crypto academic, Emin Gun Sirer, told Coin Rivet in an exclusive interview how he was one of the first to suggest that having hash power on your side wasn't enough to force through consensus changes on the decentralised Bitcoin protocol

During Paris Blockchain Week Summit, Coin Rivet had the exclusive chance to sit down with Cornell University Professor, Emin Gün Sirer, about many topics around network consensus for protocol changes on Ethereum and Bitcoin.

Speaking on the topic of the much publicised UASF movement that lead to eventual soft fork implementation of the Segwit protocol for Bitcoin, the academic stated that “in some sense, I am, the grandfather of the UASF movement”. 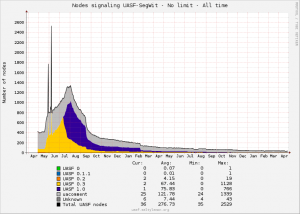 He went on to say how Bitcoin maximalists would find it hard to admit that consensus was not initially with them as they pushed for the Segwit scaling upgrade, instead of changing the block size limit to increase transaction capability on the layer one Bitcoin blockchain.

Hash power was not enough

Emin said that back when Core was pushing their narrative, and back before they had Jihan Wu on their side, “I was the lone person saying it is not enough to just have hash power with you”.

At the time of the scaling debate, we could see that Jihan and other major Bitcoin miners (prior to the split of Bitcoin Cash) were not prepared to signal their support towards Core’s scaling roadmap if it did not directly benefit the miners in terms of network fees paid to process more transactions on the Bitcoin blockchain.

Gun Sirer then told us how “Luke-dash Junior and friends came up after me” and “once Core lost miner support, they flipped their narrative entirely”.

He went on to tell us how you “don’t really see principled people flipping and flopping like that. It makes you kind of lose respect, I was steady with the same principles and set of scientifically backed things”.

#UASF was not about ending corporate dominance of Bitcoin. It was about getting rid of parasites.

Specifically on UASF, he said that it “played a role in determining the date of the fork, but deep down what was happening was a fundamental split in the community”.

Stay tuned for part two of this exclusive interview where Gun Sirer shares his views on the Segwit 2x fiasco and Ethereum’s move to a Proof-of-Stake network.

Merch store owned by Lil' Pump, which accepts Bitcoin, is powered by OpenNode