EOS has fallen to a series of yearly lows over the last couple of weeks, falling as low as $1.56 on Friday. However, it seems like traders were simply looking for the bottom, and a surge on Sunday has since carried EOS to 34% gains.

Over 46% of EOS trades came against USDT on Sunday, perhaps highlighting a readiness to exploit EOS’s current lows in the short-term game.

From Sunday morning’s starting price of $1.71, EOS climbed 22.8% in value over the day, peaking at $2.14 by the evening. The surge occurred while the overall trade volume for the broader market was in decline – a good sign in a bull market, but an ominous one in more bearish times.

That puts EOS on 34.6% gains over the weekend, although a fallback to the $2.05 range by time of writing and a sudden downturn by the general market suggests the volatility for the coin is not over yet. 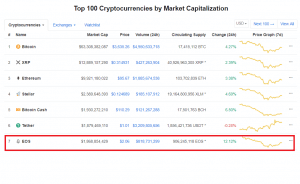 Average trade volumes for EOS have been much higher in November and December than they were in the August-October period – a trend which has been seen generally across the board.

EOS was one of the top performers on Sunday, and despite being picked up for bargain prices, it may also be feeling the boon of recent noises coming out of Coinbase.

The exchange announced on Friday that EOS would be one of 31 coins and tokens up for consideration for listing on the platform – a number that was chiseled down to 27 following the listings of some ERC-20 tokens like Loom Network (LOOM), Civic (CVC), and Decentraland (MANA).

The move over the weekend bucks the trend for a coin which had its investors’ confidence shaken at the start of the month. CTO of EOS, Dan Larimer, triggered a round of confusion among coin holders when he announced plans to embark upon a new blockchain project – one which was feared would draw time and resources away from EOS.

The loss of value for the reigning king of the ICO was so out of sync with the rest of the market that at one point there was a 55% price swing between EOS and one of the other blockchains aiming to become the ‘Ethereum killer’, TRON (TRX).

It's official: Huobi Russia up and running