Outside of blockchain, Minecraft immediately comes to mind and is a household name. In the world of crypto, The Sandbox is the most well-known voxel sandbox game, having reached a market cap high of $7.5 billion last November.

Data from Footprint Analytics about sandbox games shows that, on Ethereum, the 3 most popular games of this genre are MegaCryptoPolis, EvolutionLand, and NFT Words.

MegaCryptoPolis (MCP) was launched on Ethereum in May 2017 and migrated to Polygon on Dec. 10, 2020. MCP is also currently operating on the TRON Network. Its vision is to create open, user-built blockchain worlds.

How to play MegaCryptoPolis

MCP players can create, upgrade or destroy buildings on rented or purchased land, and trade assets on the market.

MCP players need to register an account with MetaMask or imToken and spend at least 0.05 ETH to start the game. After that, there are several ways to play and earn rewards.

Players can create buildings, all of which can produce materials such as bricks, water, electricity, etc. These are all NFTs and can be rented out or traded on the market/external exchanges to earn revenue.

There are various types of buildings and a leveling system that dictates what players can do with their buildings.

Buildings can also be rented out for a fee, subject to a 10% tax. The rent is calculated daily and the player can decide the term and cost, but cannot be rented when there are citizens and cars in the building.

Players can bid on unoccupied blocks to own them. Blocks can be traded on the marketplace, but cannot be transferred between different blockchain networks. Holding a block allows you to receive a portion of the price paid by other players for the land in that block, as well as taxes on activities such as building upgrades that each player performs on that land.

Players can buy or rent residential buildings and breed new citizens, which are essentially NFTs and can be traded on the market.

Players can buy game assets from the marketplace in bulk through resource packs and sell them at a profit. However, as of April 25, the resource packs are sold out in the store on the official website.

MCP’s token is MEGA and its price is decreasing. The highest price was $31.87 on Nov. 1, 2021, and the current price is $6.61, which represents an overall decrease of 79%. The peak and the next highest price were in November when The Sandbox and Decentraland were in their prime. 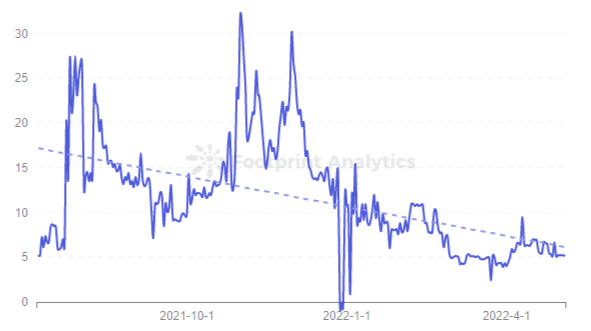 MCP’s overall trading volume is growing, which is consistent with the trajectory of a promising project. Footprint Analytics’ historical data shows that MCP trading has been sluggish until January 2021. The main reasons for this are the high cost of gas and network congestion in Ethereum.

Historical data from Footprint Analytics shows that the migration of MCP to Polygon on Dec. 10, 2020, will go a long way toward reducing gas fees for players and improving the gaming experience. 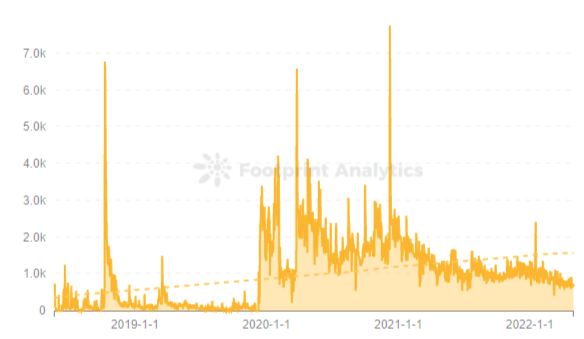 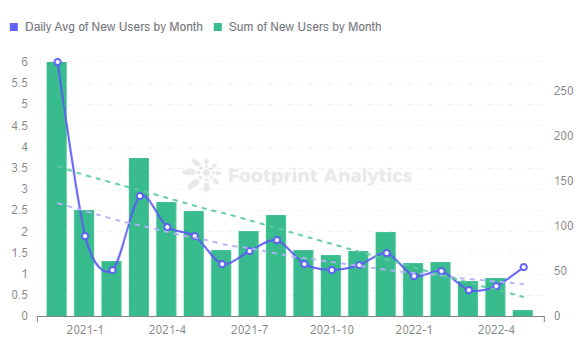 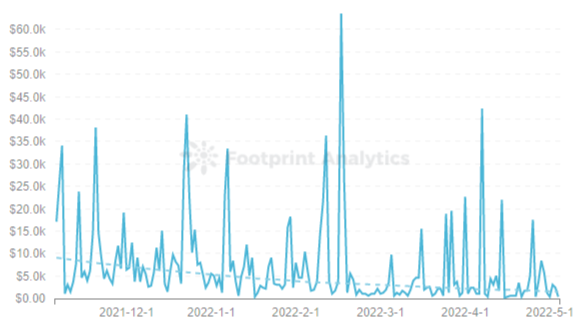 What is Evolution Land

Evolution Land is a cross-chain-enabled sandbox game that went live on Ethereum in 2018. It is currently available on five “continents”, each one a chain.

KTON, the governance token, is the Darwinia Commitment Token. KTON can be obtained by locking RING on the Crab Network, or by trading it on the exchange.

RING, the in-game currency of circulation, is the native token of the Darwinia Network. RING can be traded in the in-game Gingotts financial center or on external exchanges, and can also be obtained through apostles or trading resources.

COO (Evolution Land Carbon Dioxide) is an in-game primary consumer token with no cap on supply. Unlike RING, COO cannot be traded or transferred.

How to play Evolution Land

Players earn revenue by creating and operating their lands, training their apostles, and participating in event challenges.

After spending some RING to buy land, players can experience different gameplay and earn revenue in several ways. 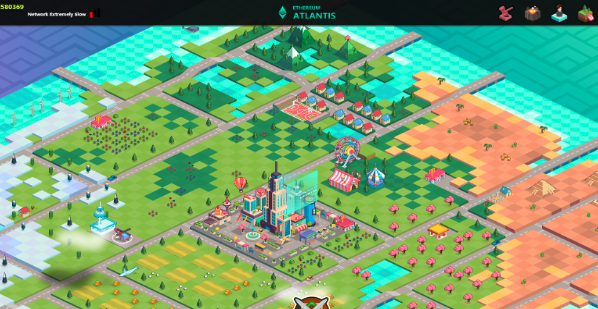 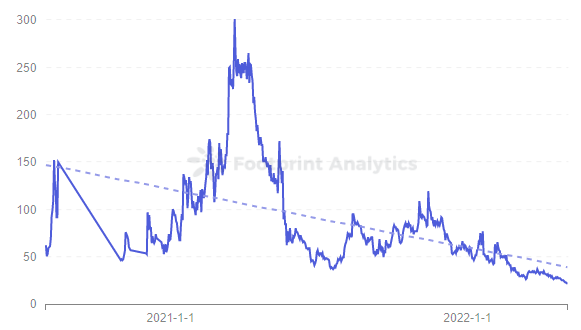 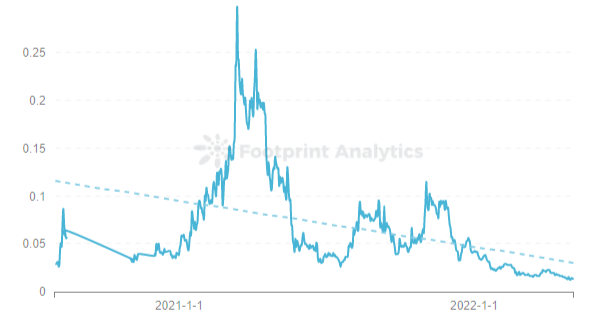 Evolution Land Atlantis has seen an overall decline in transaction volume in the past, with less than 100 transactions since July 2021. This may be because Atlantis Continent is deployed on Ethereum, where congested networks and high gas fees create a bad gaming experience.

With other continents coming online, it is now an option for players to consider starting the game on other blockchains. This could also be one of the reasons why Atlantis has a low transactions 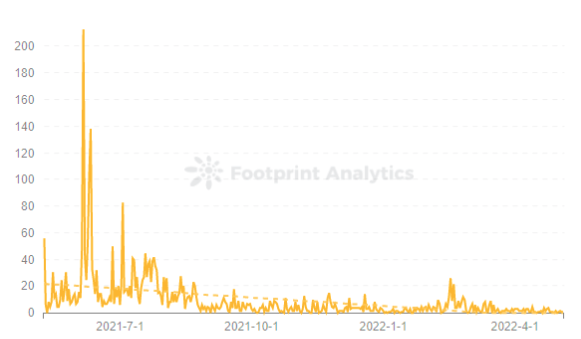 As of April 24, Evolution Land has a similar number of users as MegaCryptoPolis, at 62,000. It is the second-largest sandbox game on the Ethereum chain. However, user retention is weak and growth is minimal.

What is NFT Worlds

The token for NFT Worlds is WORLD, which is a common currency within the game and allows transactions in scenarios where there is no gas fee. NFT Worlds is hailed as the game that overtook The Sandbox.

How to play NFT Worlds

NFT Worlds also has the attributes of P2E but compared to play to earn, NFT Worlds players are more likely to get the experience of building their world.

There are two ways for players to start the game.

One is to purchase NFT Worlds directly from OpenSea. As of April 25, the floor price of a world on OpenSea is 9.2 ETH, or $27,011. According to officials, a ‘World’ rental will be launched in 2022 to lower the barrier of entry to the game.

Another is to become a Minecraft user. The users just need to have a Minecraft account (costs about $27 to purchase the game first), by logging into Minecraft  Java Edition 1.17.

Once in the game, players can play in two ways. 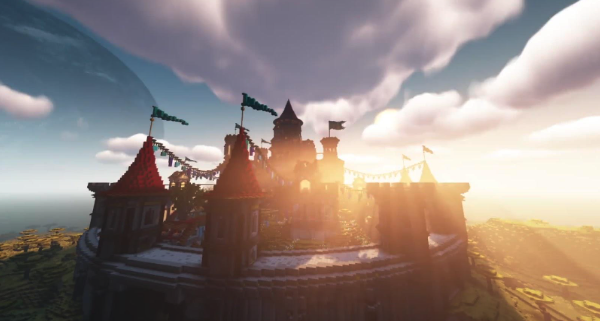 As of April 25, NFT Worlds had 23,000 users. It is the third most popular sandbox game on Ethereum. However, NFT Worlds’ social accounts, such as Twitter, have the highest number of followers of any sandbox game on the Ethereum chain.

NFT World’s monthly new user data performance is not at the very top, the second month of the launch of the new users per month remained relatively constant at about a thousand. 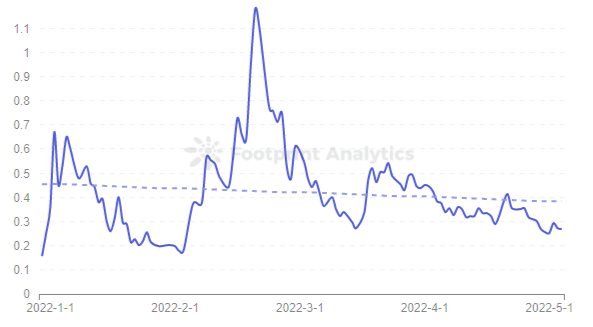 NFT Worlds’ NFT trading is trending upwards, with the peak remaining at $5.6 million on Oct. 6, 2021, just the days after its launch. Since then it has risen intermittently, maintaining a high average daily trade. On April 25, NFT Worlds’ NFT traded $340,000 in daily volume. 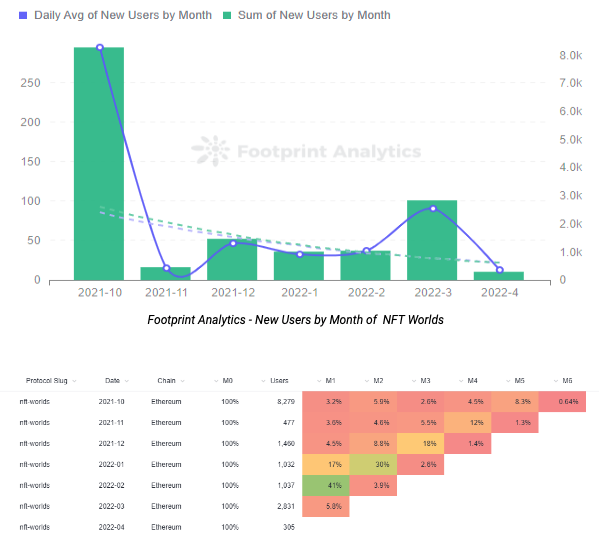