Initially focused on DeFi, BSC has since become a playground for GameFi dApps. between August and December 6, 2021, play-to-earn games drove significant growth in the number of users on the chain.

As we shall see, this has a lot to do with the quality of games on the chain.

BSC as a Gaming Chain

BSC has low gas fees and a throughput 5 times higher than Ethereum (BSC processes about 100 transactions per second). This has led to 436 game projects launching on the protocol.

Additionally, Binance has actively sought to attract developers, with initiatives that include:

According to Footprint Analytics data, users began flocking to BSC in July 2021, with an influx continuing to September 2021. However, the total number of users plummeted to 180,000 after peaking at 480,000 on Dec. 7.

While there are many GameFi projects on the BSC chain, only four have more than 500,000 total users: Bomb Crypto, Mobox: NFT Farmer, X World Games and Par War Online. 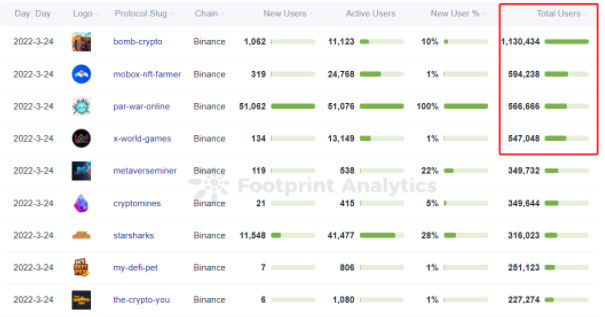 And Cryptomines is the project that caused the BSC chain to lose the most users.

In Bomb Crypto, players manage a group of robot bomb heroes that battle monsters in order to earn BCOIN.

The game is inspired by Axie Infinity and has developed rapidly since its launch last September.

Bomb Crypto is known for its fast return on investment, with many players able to regain the principal spent on their NFT heroes in 1 month.

According to Footprint Analytics data, the number of daily users increased roughly 30% month by month until the end of January then declined.

Therefore, in order to retain users, they need to continuously improve their functions and provide more ways to play to attract users in order to further expand the player base.

Cryptomines is an NFT sci-fi game where players collect workers and spaceships to travel the universe in search of $ETERNAL (game token) and mineralite NFT rewards for profit.

The main reason for the plunge is the flawed business model of the Cryptomines game.

Although the Cryptomines team is still working to save the game project, the future looks grim.

Cryptomines’ monthly retention rate has been below 5% since December 2021, and judging by the trend, user numbers will continue to be low if the team doesn’t improve the overall economic model of the game to regain user trust.

Starsharks has only been live for 4 months but has already attracted many players. Therefore, the project also contributed to a small upward trend in the number of users on the BSC chain.

Starsharks leverages the new and innovative rent-to-play concept, where players can purchase or rent NFTs through the platform’s local rental feature to promote the full utilization and liquidity of NFT assets.

BSC has seen tons of new play-to-earn games launched in the last bull run thanks to its low gas fees and fast transactions. However, when you look at the data, not everything looks so positive. Many well-known BSC gaming projects fail to retain users, including its largest.