Boredom and unprofitability are two feelings that users now associate with GameFi, which more than anything now causes players to lose out on fun while not earning nearly as much as they used to.

While projects have tried various ways to revive their games’ economies, many continue falling into the death spiral. For example, StarSharks, which is still trying to increase its token price, but can no longer keep users without the profits of before.

According to Footprint Analytics, GameFi user numbers peaked in December and have slightly declined into 2022, showing a lack of growth. The overall number of users has remained around 1.2 million. 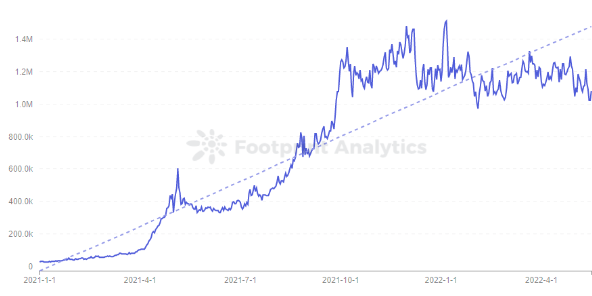 BTC plummeted in early May, dropping 38% in market cap compared to the beginning of the year, while GameFi token’s market cap fell by as much as 73%. When a bear market hits, GameFi tokens are quickly sold off when users perceive a lack of speculative opportunities.

GameFi token’s market cap and trading volume are generally positively correlated, but they were negatively correlated when the overall market fell in early May. Trading volumes increased significantly, and users fled from this volatile gaming economy model in droves.

The GameFi industry looked popular at the start of 2022, and GameFi took advantage of the uptick during the bull market, where users could even make a profit just by mindlessly investing. But when a bear market hits, users prefer to find investments that have intrinsic value.

Will AAA-titles games be the way out for P2E?

In traditional gaming, AAA games refer to titles with high development costs and long periods of development. Such games get a large number of high retention users because of the beautiful graphics, rich playability and attractive narrative.

Despite a rocky year, GameFi has continued receiving VC attention. According to Footprint Analytics‘ investment data in the game sector, both the amount and number of investments are up significantly compared to the same period last year, especially in April when 41 investments totaling $2.41 billion were made. Among them, there are some VCs who start to invest 3A GameFi games.

One of the most famous AAA blockchain games is Illuvium, which has been in development for a year and is still in private beta. The public beta launch is planned for the second quarter.

Illuvium attracted a lot of attention since the first trailer was released, and the price of the token climbed, peaking at $1,800 in November. It then fell, especially in early January when the Illuvium contract was attacked due to a bug, and the attackers transferred 100 million sILV.

As of May 18, ILV was still around $300, with significantly lower trading volume than at the end of the previous year. Although the project has raised $43 million through a private placement and IDO, the long period is fading user expectations. 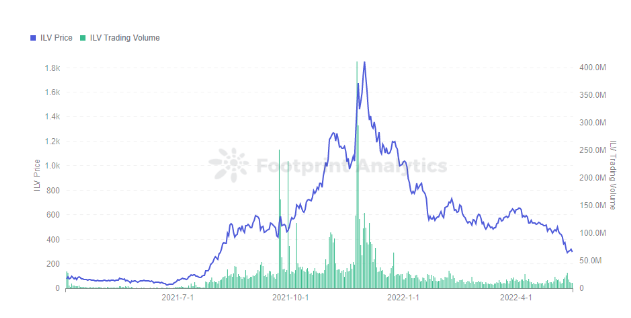 These AAA games that may be officially launched this year are Illuvium, Big Time and Phantom Galaxies. The others, like the recent popularity of Ultiverse, are at least until next year.

However, this type of game faces a long lead time, which is problematic in the world of crypto, where timing the market and having momentum are crucial.

Hence, in order to solve the funding problem, projects often offer tokens or NFTs to raise funds first, and the amount of funds raised depends on the project’s narrative. However, since the game is not yet live, the token or NFT lacks sufficient utility and users hold them with a gambling mindset. Too much issuance or over time will also have a negative impact on their value.

As seen in the Footprint Analytics, of the tokens collected so far for 3A game issues, with the exception of Illuvium which has a higher price, token prices for games like StarLink, Star Atlas, and Sidus are all below $0.01. And they all have similar price trends, with prices reaching a high point around the end of last year when the concept was hot, and then falling all the way down.

Although VCs are constantly investing in AAA games, no single project has yet been launched.

But despite their problems, this new type of game (at least in the blockchain space), may put playability back into play-to-earn.

AAA games will also push us further into the world of the metaverse. In the short term, GameFi may seem like a bubble, but in the long term, more intrinsically valuable games will be the way forward.