The cryptocurrency industry, despite the fact that it has only been active for a little more than a decade, has witnessed the birth of thousands of digital currencies. As a result, learning about the underlying infrastructure for each cryptocurrency in the market can be very challenging, especially for beginners.

Notably, each cryptocurrency has its own infrastructure, which is typically based on one of the four basic types of blockchain protocols: private, public, consortium, or hybrid. In most cases, the use cases of these cryptocurrencies are determined by the type of blockchain on which they are built, and as a result, they operate within the capacity of the host blockchain.

Klaytn, in its own case, is a business-focused public blockchain project that combines the benefits of public blockchains, such as decentralised data & control and distributed governance, with the low latency and high scalability of private blockchains.

Just before we give a broader answer to the question of “what is Klaytn and how does it work?” let’s quickly have a look at the brief history of the digital asset.

A brief history of Klaytn

Led by Yeo Min-Soo who acts as CEO, Kakao is known for a variety of services, one of which is the deployment of a mobile messaging application popularly known as ‘KaTalk’, specifically for smartphones operated by the Kakao corporation.

However, owing to its multifaceted business nature, Kakao’s attention was drawn to the cryptocurrency industry in 2017, around the time Bitcoin and other altcoins were experiencing a major bullish race.

Kakao couldn’t resist the urge to participate, especially given the growing interest from the likes of Facebook, and other players in the corporate world. As a result, the company went on to develop its own cryptocurrency, resulting in the creation of Klaytn.

Along the line, Kakao, like most other corporate bodies to have ventured into the crypto business, was also faced with several backlashes, and setbacks, with the heaviest of them coming from the country’s financial regulators. A close example would be Facebook, which also had a bulk of regulatory challenges at the pivotal stage of its LIBRA project.

Having scaled several hurdles, Kakao eventually achieved its crypto endeavors as it finally launched Klaytn in mid-2019. The majority of the success, however, was made possible with the help of its blockchain-based subsidiary, GroundX which played a very instrumental role in the eventual launch of the Klaytn blockchain.

Klaytn, as mentioned earlier, is a business-oriented public blockchain project that combines the special abilities of both public and private blockchains together to deliver a user-friendly blockchain experience via its hybrid infrastructure.

Specifically, Klaytn makes use of a modular network that allows businesses to seamlessly interface, and most importantly, create as well as operate their own customised service-oriented blockchain on the Klaytn architecture.

These service-oriented blockchains are otherwise referred to as service chains, and they run autonomously as subnetworks which further contributes to the core essence of Klaytn’s enterprise-friendly ecosystem.

Giving that these service chains are flexible and easy to customize, they can seamlessly accommodate any kind of web service, however, with the exception of those that have to do with gambling and financial speculations. 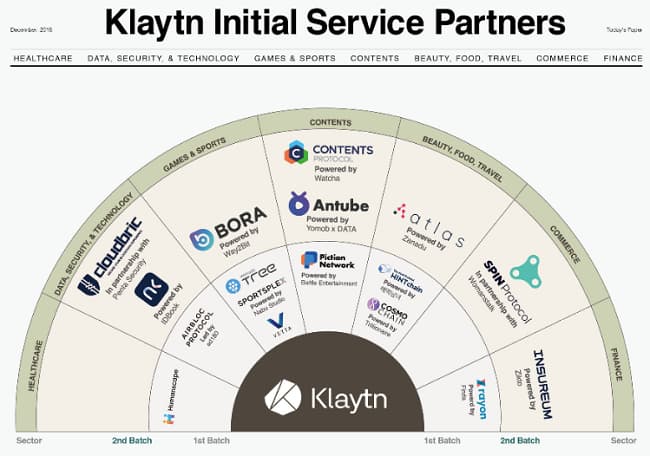 Following its official launch in 2019, Klaytn quickly amassed more than 40 initial services partners (ISPs), cutting across a wide spectrum of industries with diverse use cases ranging from healthcare to entertainment, and finance, among several others.

The first set of ISPs were selected across over one dozen destinations based on the solidity of their blockchain-based services, and the size of their active userbase which served as the two important metrics for selection. So how does Klaytn work?

How does Klaytn work?

Because Klaytn is enterprise-focused, it substitutes the commonly used Proof-of-work (POW), and Proof-of-Stake (POS) consensus mechanism with an enhanced version of Instabul Byzantine Fault Tolerance (IBFT).

Specifically, Klaytn employs a practical BFT which enables the network to operate a hybrid infrastructure as earlier mentioned, combining both benefits of private and public blockchain together.

In comparison, this Klaytn’s underlying infrastructure cannot be achieved where POS or POW is implemented in isolation. However, despite using IBFT as its primary consensus mechanism, Klaytn still allows beginners to employ the POS consensus mechanism, which only supports a limited number of validators.

Klaytn blockchain adopted the same virtual machine as Ethereum (ETH), and functions closely like the Ethereum network, albeit, at a much faster pace. For instance, Klaytn’s adopted virtual machine for the smart contract is able to process at least 4,000 unique transactions in just one second and boasts of a gas rate fewer than 1/10 of ETH’s.

Also, while there is yet to be widespread institutional adoption of blockchain technology, primarily due to scalability concerns, Klaytn’s adoption of BFT will address scaling concerns, particularly at the enterprise level.

Not only that, Klaytn likewise has DX offerings which not only makes interoperability among hosted services possible but also provides an integrated development environment for developers.

Furthermore, and perhaps the most interesting part that edges most other host blockchains is that Klaytn transactions are fixed, and as such, transaction fees are predictable. If not for anything else, this ultimately solves one of the major concerns for blockchain adoption at the enterprise level.

Unlike other blockchain systems that address their hosted services as decentralised applications (DApps), Klaytn, on the other hand, addresses its service chains as Blockchain applications (BApps).

According to Klaytn’s official website, BApps are “first-class citizens in Klaytn’s world” and are referred to as such because, unlike on other host blockchains, are not obligated to run decentralised web services on the service chain. Hence the availability of the option to employ POS consensus mechanism as a beginner.

Regardless, both centralised and decentralised BApps can benefit from Klaytn’s public mainnet as well as its blockchain-enabled transparency and security. For reference, these BApps are earlier referred to as ISPs which as of 2020 had grown to about 12 dozen on the Klaytn’s mainnet.

As you would expect of an enterprise-focused blockchain, Klaytn delegated the governing activities to a board that consists of multinational businesses and organisations, instead of adopting the common method employed by most of the host blockchain where token holders can participate in the network’s governance. 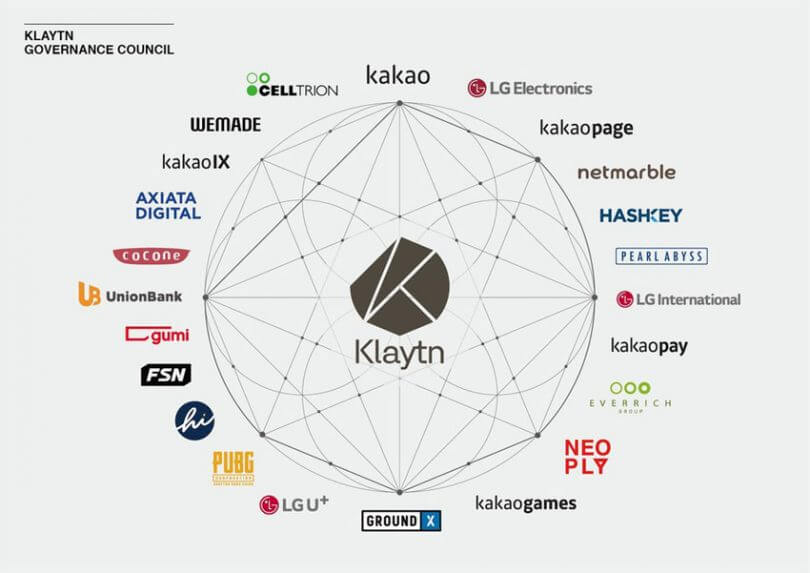 On the other hand, the governing council members on Klaytn’s board are in charge of proposing, and voting for or against any improvements and activities within the network. These board members also get to oversee the activities of their node networks or simply put, service chains.

Ultimately, the governing board members are responsible for the growth and development of the platform’s ecosystem.

Klaytn Improvement Reserve, or KIR, is the platform’s reward mechanism through which developers or participants who positively contribute to the network’s growth can be compensated.

Specifically, when a governing board member submits a proposal towards the growth of the overall network, or perhaps, one that improves its user experience, they can be incentivised for their contribution via the KIR protocol.

KLAY is the default and native token used on the Klaytn blockchain. KLAY is primarily used as the utility token for all platform transactions as well as all other blockchain applications on the network.

In addition, It is used to pay and exchange for all applications that run within the Klaytn ecosystem. As of the first quarter of 2021, there were approximately two billion KLAY in circulation, with interest from industry players on the rise.

Finally, the Klaytn blockchain initiative aims to provide a scaling solution at the institutional/enterprise level while also accelerating the overall adoption of blockchain technology within the sector.