A French tech firm is selling a room heater that mines cryptocurrency.

Qarnot’s QC-1 is the first heater to utilise the high temperatures generated by the intense computing power of cryptomining.

The QC-1 mines cryptocurrencies with two graphics processors and is noiseless, the company claims.

A mobile app allows users to set up and personalise the QC-1 once connected to electricity and an internet network.

A company statement reads: “We estimate that a QC-1 can heat a 20qm room. Isolation and ceiling height are obviously factors to take into consideration as well.

“The QC-1 generates a high-quality soft heat – you need less power than with a more ‘classic’ electricity heater.” 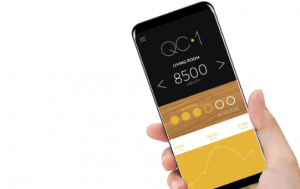 The QC-1 crypto heater is an extension of Qarnot’s Q.rad computing heater, released in 2013.

The Q.rad uses heat from microprocessors in offices and other high-computing-intensity businesses to heat properties where it would otherwise be wasted.

The company says a major inspiration behind the project was reducing the environmental impact of cryptocurrencies.

According to some estimates, Bitcoin mining already uses as much electricity as Greece.

The problem was recently highlighted by the news that Iran has offered a bounty to anyone who exposes the illegal mining of cryptocurrency.

This year, Iran launched a crackdown on the illegal use of subsidised electricity for mining currencies like Bitcoin.

Tales from the crypto: Insurance firm releases will to retrieve lost crypto after death

Seven exchange hacks in 2019 - and counting?