How Do Alien Worlds Compare to Splinterlands?

Alien Worlds launched in August 2020, and the number of active users soared to 350,000 in April 2021. Currently, it maintains an average daily user number of about 200,000, the 2nd-highest in the GameFi industry.

In this article, we’ll compare Alien Worlds to Splinterlands, the two most popular blockchain games, and explore how Alien Worlds rose to a close second.

What Are Alien Worlds?

Alien Worlds is a leader in the entire WAX ecosystem and was the first to introduce liquidity mining to NFT games, allowing users to earn TLM tokens through NFT mining and pledging. According to Footprint Analytics, as of April 20, the number of active users is the 2nd highest in GameFi. 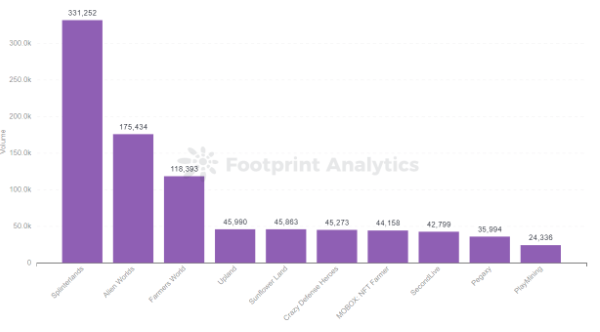 There are 6 planets in the game, and each planet is a DAO organization. Its biggest feature is that the governance between planets does not interfere with each other, and the types of landforms are not the same. Players can find suitable planets to mine and participate in governance, with the following P2E features:

There are 2 types of tokens in the Alien Worlds ecosystem, one of which is the NFT token (in-game props in the form of NFTs) representing in-game items. The other is Alien Worlds’ native token, TLM, which has the following key statistics as of April 20.

TLM’s current price of $0.09 doesn’t look very attractive. Since the amount of TLM that can be mined will gradually increase, it is unlikely that the token price will rise significantly. 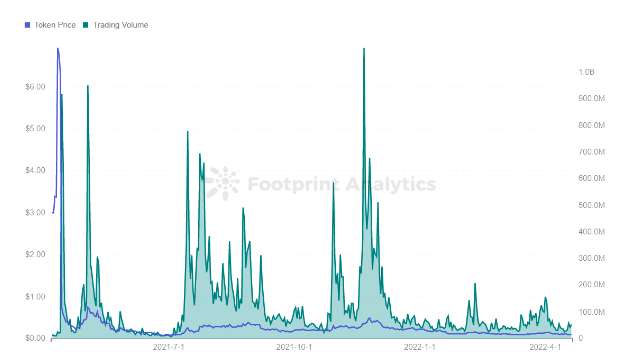 TLM has many uses and increases in value with Alien Worlds’.

Comparison of total number of users

According to Footprint Analytics, Splinterlands surpassed Alien Worlds in terms of users after September 2021. 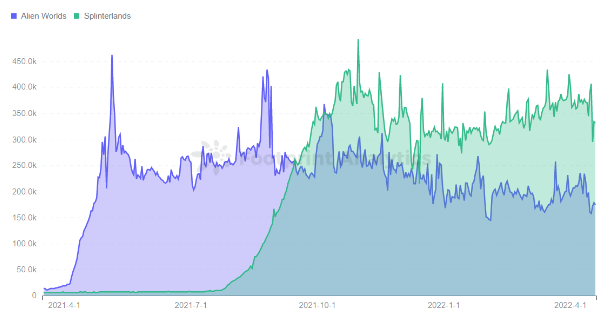 In terms of transaction count, Alien Worlds has consistently outperformed Splinterlands. This is because the game released by Alien Worlds on the WAX chain, the underlying architecture of the WAX chain is sufficient to meet the needs of game development for stability, and can process more than 8,000 transactions per second, which is better than the Hive chain, while Splinterlands is Publish on Hive.

It is worth noting that the trend in the number of transactions in Splinterlands is relatively stable. Alien Worlds is affected by the price of TLM, and its transaction count has dropped significantly in the past 4 months. 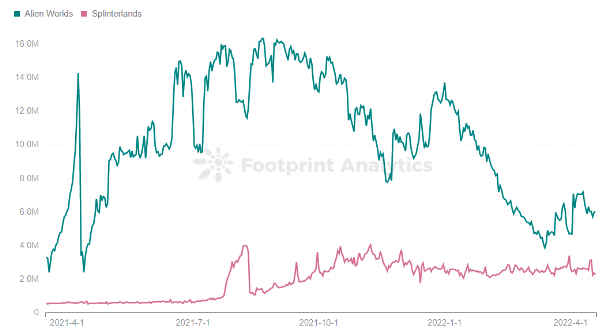 Alien Worlds and Splinterlands are the most popular games in GameFi games, but are very different in terms of gameplay. At the same time, these two games have promoted both of their ecosystems, which are WAX and Hive.