@dum is a Twitch streamer and host of S**tcoin Talk, and is widely respected within the crypto community

This week we spoke to @dum, one of the nicest people in the crypto space. He is probably most well known as the host of S**tcoin Talk, a YouTube series that began a few years ago. For those new to the space, S**tcoin Talk is a show where @dum and a few of his friends discuss a variety of altcoins in regards to charting or mining. @dum has also started streaming on Twitch and is the proud owner of a green screen, which he has been putting to good use. As a member of the community, @dum not only provides technical knowledge but incorporates it into a fun and relaxed environment.

RC: How did S**tcoin Talk come about?

@dum: I’ve always liked video chatting and streaming. One day, I thought of the idea and asked a few of my friends if they wanted to help me out (shout out @thisisnuse, @bitcoin_dad, and @notsofast) and be on the show. Surprisingly, they all wanted to come on and chat with me. Generally, a lot of the people in crypto don’t want to show their face or are wary of having any part of their identity found out, which is understandable.

That being said, I was very grateful that they agreed to be a part of that. As we did more episodes, we ended up getting more followers, more subscribers, and more people came on! It’s been a really fun project. There have been so many funny moments on there and I’ve been able to talk to so many cool, funny, and smart people. Honestly, it’s been a blast!

RC: What were you up to before you found cryptocurrencies?

@dum: Not a whole lot. I found out about Bitcoin in 2014, so before that I was just working really. I had a house with some of my friends and we would party a lot. I would build computers and make music with them as well. I worked at a fast food place after high school for a while, and then worked for a construction company for a bit as well.

RC: How did you find out about cryptocurrencies then?

@dum: My dad asked me about a coin called NXT. I think he might have heard it on the Joe Rogan podcast or something. This is when I did some research and I found out about Bitcoin and Dogecoin also. That’s how I really got involved. At the time I was working in a lame electrical warehouse for minimum wage. I bought my first .25 BTC for $200 when BTC was at about $850 each in early 2014.

Dogecoin was the real MVP for getting me into trading altcoins though. I found out about Cryptsy shortly after I bought my first BTC, and then I was trading some crazy coins like MOON and 42. Those were the best times! Also, Dogecoin just turned 5 years old, so shout out Dogecoin. Happy birthday, I love you.

RC: We’ve been talking about shilling a lot on our website recently, including the ethics of doing such and the recent SEC crackdown. What are your views on it? Is shilling ever acceptable in your opinion?

@dum: I, personally, am not someone who shills anything (except my own Twitch stream). I’ve never been one to use referral links, or even tweet about coins trying to influence people to buy them. I hardly ever tweet out any coins that I’m in, or positions I’m in, because I don’t want people to blindly follow what I say. Sometimes, I don’t even feel comfortable in the trades I’m in, so I would hate to have someone else get into that position because they took my tweet as advice.

I don’t really have any real opinion on other people shilling things on Twitter. Obviously, there are people that are getting paid to say things on Twitter and then there are people that are honest and possibly have their followers in mind. I don’t think it’s too hard to spot the difference. You just have to weigh the pros and cons of jumping into something just because you saw it on Twitter. Always do your own research! In the end, if you get burned on something shilled to you online anywhere, you should know that someone made money from your mistake. You have to be very careful out there!

RC: As someone who is obviously involved in a lot of altcoins (or s**tcoins, if you will), what’s your view on BTC maximalism?

@dum: I think there is way more to cryptocurrency than just Bitcoin. That doesn’t mean I don’t love Bitcoin and think it’s very important. However, there is so much cool stuff happening outside of Bitcoin that I have to be part of it. I think altcoins are very necessary because not all the technology people want to develop will work alongside Bitcoin.

RC: Can you explain your trading methods to us?

@dum: I don’t do a whole lot of trading. I love to hold bags of coins and wait until they pump. I don’t use Bitmex or any leveraged trading. I hardly trade on Binance either. More or less, what I do is buy bottomed-out coins that I believe are undervalued. That seems to be easier for me to make profits. I tend to trade low-cap coins that have either bottomed out on the chart or have a very low market cap compared to other coins in the sector.

People generally don’t like to trade these coins because most of them have low liquidity or they’re just on a small exchange that people don’t want to send money to. Sometimes it takes a long time for any sells to hit and sometimes they don’t at all. I always use risk management. On smaller coins, I use a fixed risk percentage of my portfolio and definitely average down if I have to.

RC: What has it been like to watch the community grow during the bull run of 2017 from the doldrums of the previous years?

@dum: First off, there are a ton of people on Twitter now! I can hardly believe it. I remember in previous years I would have a hard time following more than maybe 100-200 people because there just wasn’t that many people using Twitter. Now, there are so many accounts that I can hardly keep up. I think I follow close to 500 people now. A lot of smart people have emerged and also a lot of scammers; it definitely goes both ways. I definitely enjoy the community and the content people are putting out there.

RC: What are your top tips for newcomers in the space?

@dum: For people trading, learn to use risk management. Also, it’s OK to look into what other people are doing with their trades, but you should make your own decisions and try to create a strategy that works for you. Be aware that there are scams out there that want to take your money. Be patient, take things slow, and don’t give up. It definitely takes experience and time to get the hang of trading altcoins. You are going to make mistakes, but ultimately, that’s how you become better! For those people mining, don’t go all in right away. Do a ton of research before you decide to invest in the hardware. Mining can take a lot of know-how and is pretty complicated. Build yourself a nice desktop computer and mine with that before you go crazy with a huge rig or an ASIC.

RC: Do you have a particular memory that stands out since you became involved in the space?

RC: What do you get up to outside of crypto?

@dum: I hang out with my dog all the time! She is basically with me 24/7 (she also happens to be @dum’s Twitter profile picture). I like to build computers and I play a lot of games, probably more than I should. Super Smash Bros comes out for the Switch soon so that’s going to take up 99% of my time.

RC: How do you see the space evolving in the next couple of years?

@dum: I think the most recent ICOs are going to go away. Projects that are actively developing things are going to come out with some awesome technology. I think we’ll see more partnerships happening with already established companies and new blockchains. I’m really looking forward to the new decentralised exchanges. I’m very excited for the next two years for sure.

RC: How excited are you about your new green screen?

@dum: Dude! I’m so excited. To be honest it’s a bit of a pain to set up, and I still need to learn how to operate it. I plan on learning how to edit videos and how to use it on stream so I can make more content. The possibilities are endless. It’s very cool though, and it’s going to be so much fun to use!

@dum usually hosts S**tcoin Talk around once a week, so don’t forget to check out their YouTube channel here. Also, if you follow @dum on Twitter here, then you can find his weekly Twitch schedule. 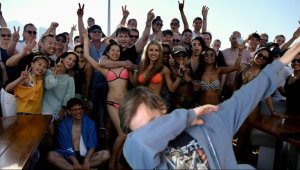