On November 8, Gnosis released a proposal called GIP-16 to merge with xDai, one of the top sidechains of Ethereum, and develop the xDai blockchain under the Gnosis Chain.

On December 8, the proposal passed. One STAKE can now be exchanged for 0.032 GNOs and xDai Chain will be renamed to Gnosis Chain. GNO holders will be rewarded with the actual value of xDai

While some see the merger as a hostile takeover by Gnosis, others believe it was the logical conclusion for Gnosis and xDai to unite and complement each other’s resources.

But what is xDai, and how might this merger give it the means it needs to grow?

xDai: An Ethereum sidechain based on DAI

In September 2018, a team led by Igor Barinov, co-founder of Oracles Network launched xDai and integrated it into Block Scout at the end of October.

xDai uses stablecoin Dai as its native token and is designed with a proof-of-stake consensus mechanism to solve Ethereum’s congestion and transaction fee problems.

xDai, as an early Ether scaling solution, has been able to become a top sidechain. In addition to its own design to complement the disadvantages of Ethereum and meet users’ needs, it also needed the right opportunity.

Burner Wallet, a P2P payment wallet, was the opportunity that introduced xDai Chain to the broader community. Since then, protocols, projects and applications deployed on xDai have grown. xDai’s governance token, STAKE, has grown and moved in price to some extent.

xDai has attracted a large group of protocols, projects and dApps to be deployed on the chain due to its compatibility with EVMs (Ethereum Virtual Machines), fast transaction speed and low cost.

According to xDai, the projects deployed on xDai currently cover major categories including bridges, analytics, DeFi, NFTs, DAOs, and gaming. 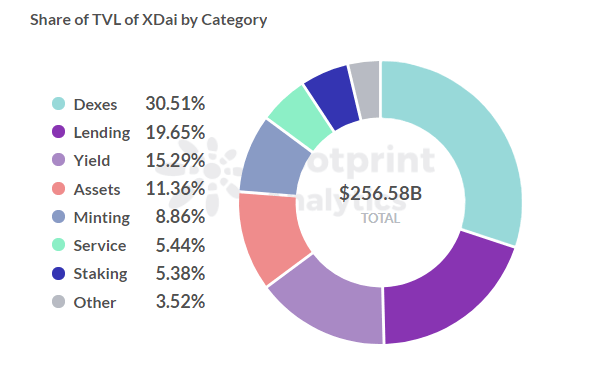 Footprint Analytics: Share of TVL of xDai by Category

Footprint Analytics data shows that the current xDai TVL is $256.58 billion, with the DEX category accounting for the highest share at 30.51%. xDai categories such as Honey Swap, Perpetual Protocol and Curve have a large contribution. 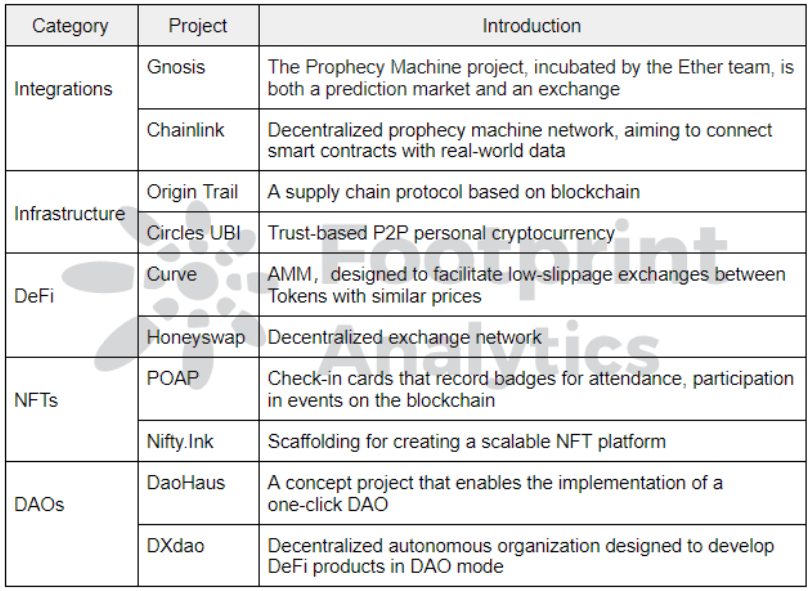 Although xDai has covered the current mainstream categories, xDai’s TVL growth is slow compared to the growth of other public chains, like Solana, Terra, and Polygon, among others, shown by Footprint Analytics’ data

Footprint Analytics: TVL of xDai and Other Chains

The main reason is that xDai suffers from no internal connections inside its industry, no big budget incentive plan, and weak marketing and operational capabilities. Without these, xDai risks terminal decline.

With the merger of Gnosis and xDai, Gnosis plans to prioritise incentives to complement the expansion of the existing ecosystem, in effect making up for xDai’s shortcomings.

Although xDai Chain must change its name and lose its right of attribution, it is still a new step for xDai to stay ahead in the era of expansion when all chains are expanding.

Are NFTs a sustainable project for the decentralised economy?

NFT marketplaces and the impending rise of fiat currency for purchases