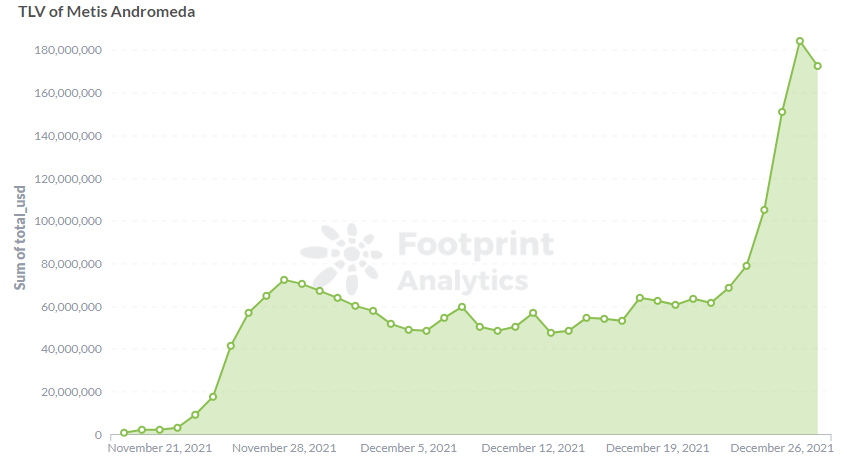 One of the most fascinating parts of the story is that the head of the decentralised autonomous corporation (DAC) behind Metis is Vitalik Buterin’s mother – Natalia Ameline. Going beyond this interesting fact, however, could Optimistic Rollup be the best solution for Ethereum scaling?

The state of Layer 2

Looking back to 2021, the Ethereum network has more than 2,000 dApps and nearly 140 million users. With this comes network congestion and super high gas fees, which seriously hinder usage. Layer 2 is a powerful tool to solve this problem and has become one of the most noteworthy technology trends last year. 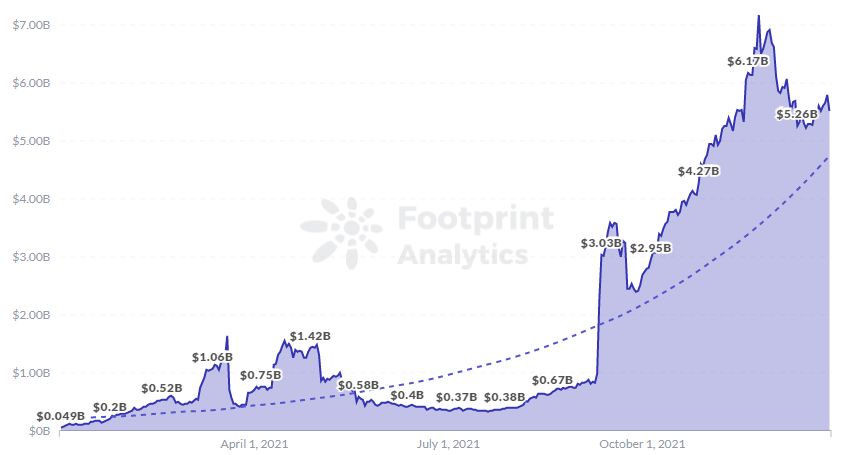 As you can see from Footprint Analytics’ data, Optimistic Rollup’s overall TVL is $3.6 billion, accounting for 64% of the whole Layer 2 ecosystem. 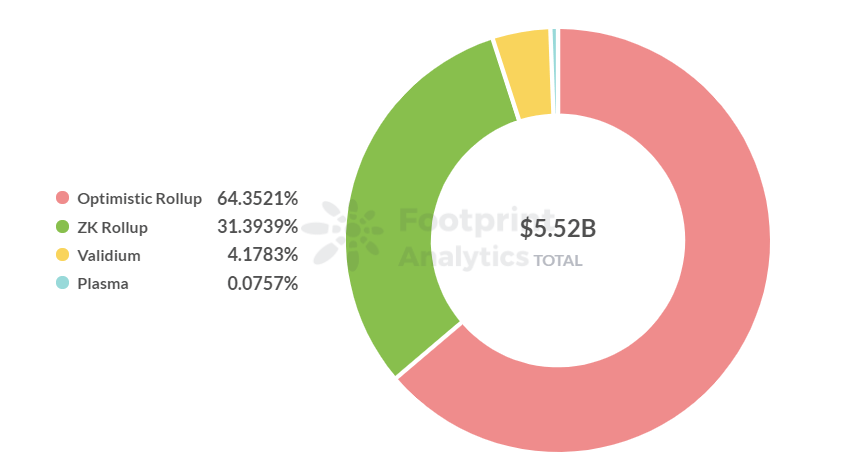 What makes Optimistic Rollup stand out?

Optimistic Rollup is an EVM compatible solution that reduces gas fees while increasing security and trust. It works by reducing the time required to confirm transactions (currently limited by Ethereum’s 13-second block time) and increasing transaction throughput (the number of transactions that can be processed per second).

Technically, Optimistic Rollup solves the main innovation is proof-of-fraud, a security model which is different from zkRollup. Using this security model, it only sends transaction data to the main chain, thereby increasing operational efficiency. Other calculations and state storage do not happen on the main chain, but are transferred to Rollup, where the block producers and verifiers execute the calculations.

In addition to operational efficiency considerations, it is also very important in terms of anti-fraud and ensuring the security of funds. The solution assumes that at least one user will detect fraud and report it to the main chain in time, thereby ensuring the integrity of the system. When the challenge period for an Optimistic Rollup block (a block of Optimistic Rollup transaction data sent to the Ethereum blockchain, for example) is over, the block is recognised as final.

In addition, Optimistic Rollup is also EVM compatible. For dApp developers who are hindered by Ethereum congestion, this solution keeps the Solidity code intact and dApp migration costs low.

The downside of Optimistic Rollup, on the other hand, is that there may be a short delay when funds are transferred, as observers detect any fraud. In some cases, this can be as long as a week. 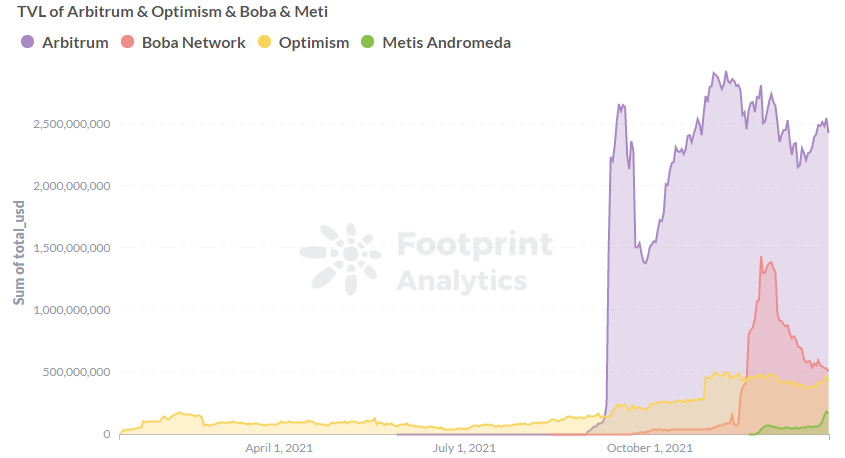 In a slightly sluggish market for blockchain chains, Metis, a rising star, has surprised everyone with a high growth rate of 182%. On the other hand, Boba Network’s growth rate is minus 59%, and Boba had gained a lot of attention with a 250% spike just a month ago, while TVL of Arbitrum and Optimism did not have much fluctuation.

Arbitrum currently has 49 major dApps, with Curve’s TVL ranking first with $464 million, followed by Multichain ($355 million) and Abracadabra ($299 million), SushiSwap ($287 million), and Synapse ($195 million). In terms of project types, in addition to the normal DEX, lending and yield categories, the asset, bridge and options categories are also covered, resulting in a rich ecosystem. 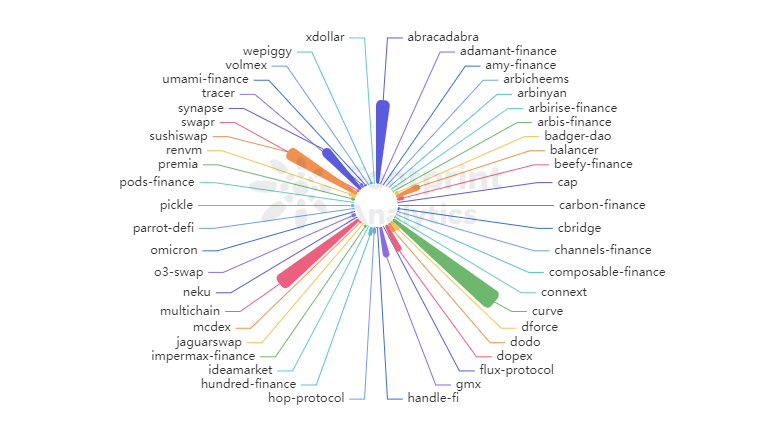 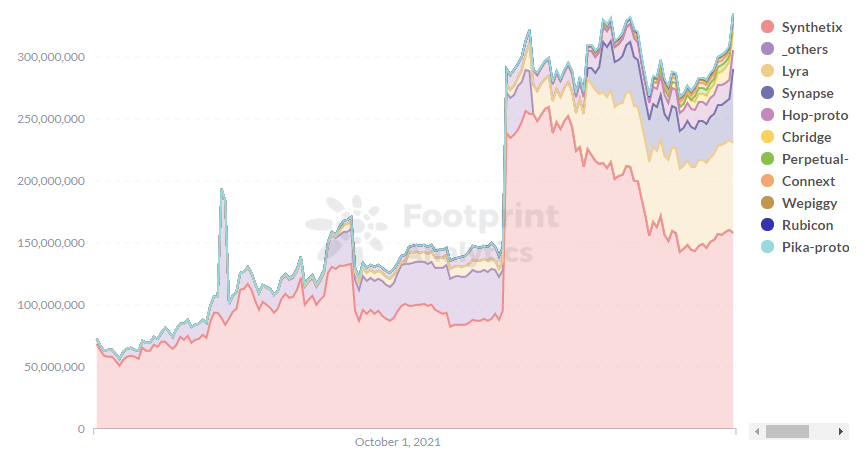 Boba Network’s TVL is mainly based on its DEX platform Oolongswap, which makes up almost 100% of its TVL. 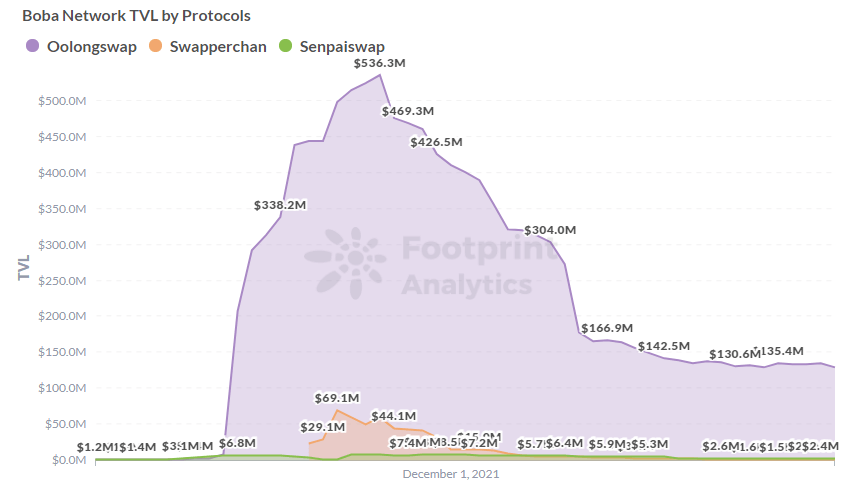 Metis is a newcomer, as the chain is still in its early days, the current TVL of the ecosystem is $180 million, mainly consisting of 1 DEX platform, Standard Protocol, and it needs to continue to enrich its ecosystem.

Currently, public chains on Optimistic Rollup lack developed ecosystems except for Arbitrum, with most others in the initial stages. With improved infrastructure and ecosystem construction, they should aim to attract more developers.

In the short term, TVL on Optimistic Rollup public chain has an obvious advantage as it accounts for 64% of all public chains in Layer 2.

But it also faces challenges from projects that also provide scaling solutions for Ethereum, such as sidechains Polygon and zkRollup, as well as Layer 1 public chains such as Solana, Terra, and Avalanche.

Web 3.0: The future of e-commerce beyond Amazon, Walmart and Alibaba

The metaverse is gradually becoming a major sensation among corporate brands

Seven years later, Web 3 is setting a standard for the decentralised economy