According to the Gartner Hype Cycle, blockchain isn’t going through its best moment. In fact, the exact words used last week were “sliding into the trough of disillusionment”.

Ouch. That’s hardly encouraging for the blockchain and crypto pioneers who’ve been clamouring for mass adoption. If Gartner is right, most blockchain technologies are still between five to 10 years away from having any meaningful impact.

What is the Gartner Hype Cycle?

Enterprise research firm Gartner is well-known for its informative reports and predictions across industries and business verticals. The company developed the Gartner Hype Cycle in a bid to analyse new technologies and try to distinguish marketing and “hype” from actual use cases and progress. 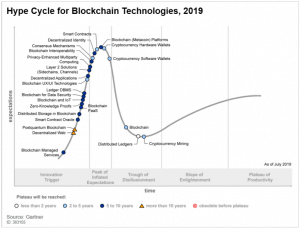 When it comes to blockchain technology, as far as the company is concerned, there’s still a long way to go. In fact, if you check out the cycle above, you’ll see how blockchain was thrust into the public domain and then incessantly hyped by the media using words like ‘immutable’, ‘decentralised’, and ‘secure’.

The whole ICO phase took on a life of its own. Blockchain technology could purportedly resolve any problem from running a country to healing the sick. However, currently, according to the research firm, blockchain is struggling to keep up with our high expectations. In fact, it is sliding into the “trough of disillusionment”.

Many blockchain projects are failing to deliver

Of course, the multiple scams and mismanaged projects that came out of the ICO craze would eventually lead the regulators to quash it. The crypto winter of 2018 and the billions of dollars stolen in hacks and fraud were enough to weed out most of the serious projects from the flashes in the pan. However, as we head towards the end of another full year, some of the larger projects and companies are starting to struggle.

Clearly, interest in blockchain is waning as many experiments and ideas have failed to come to fruition. Moreover, pioneering market entrants like Bakkt proved that institutional interest simply isn’t as big as we thought it was. It’s almost close to being non-existent, in fact.

Facebook is pushing the envelope and that’s making regulators uncomfortable. Whether due to a lack of ability to perform or a lack of permission to go forward, big businesses are dropping out one by one.

Pioneering blockchains like NEO and now Ethereum have outwardly recognised that they cannot scale. Causing quite the stir amid the crypto community last week was the narrative coming from DevCon that Ethereum was moving to Ethereum 2.0. An entirely new blockchain with a new token.

Given that ETH 1.0 has turned out to be a scam, advertised repeatedly as scalable by people like you who knew it wasn't, why shouldn't an article lead with the obvious question: Will ETH 2.0 also be a scam?

This lead to Ethereum being called many things from a “scam” by Bitcoin maximalist Peter Todd to misleading.

Its creators insisted that they always knew Etheruem could not scale and that Etehreum 1.0 would be migrated over to Ethereum 2.0, as we saw earlier this year when NEO admitted that version 3.0 would be an entirely new blockchain.

With the realisation that the technology isn’t as scalable as we thought, it’s probably of little surprise that it should be languishing at its lowest point right now.

All that goes up must come down – and vice versa

“Blockchain technologies have not yet lived up to the hype and most enterprise blockchain projects are stuck in experimentation mode”, commented Avivah Litan, an analyst and research vice president at Gartner.

“Blockchain is not yet enabling a digital business revolution across business ecosystems and may not until at least 2028 when Gartner expects blockchain to become fully scalable technically and operationally”, she added.

The good news for blockchain technology is that it appears to have hit its lowest point. This means that the only way from here is up. Five to 10 years may seem like a long time, but Facebook is already 15 years old. Just look how far that has come. From providing an easier way to keep tabs on our acquaintances to aiming at creating its own currency.

Moreover, Gartner says that many current developments could serve to change the pattern. The company believes that blockchain platforms will achieve scalability by around 2023. They should also be interoperable and support smart contract portability and cross-chain functionality.

“Altogether, these technology advances will take us much closer to mainstream blockchain and the decentralised web, also known as Web 3.0”, Litan explained.

Gartner has been examining blockchain technology through the Gartner Hype Cycle for a few years now. The firm had already advised that interest was beginning to cool off last year.

This is nothing new for new technologies, however, and it’s natural that it will take some time before the infrastructure, capability, and mindsets are in the right place for it to have a meaningful impact on our lives.