Gold bulls are back after four consecutive months of gains

Gold's $7.8 trillion market cap may be looking at an upwards trajectory in 2019

The value of gold has been experiencing consistent gains over the last four consecutive months.

On the monthly chart, it looks as though the asset held in reserve by central banks around the world is potentially finding historic support – levels not seen since before the last financial crisis. 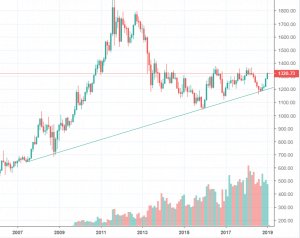 October’s latest bounce for gold has seen many chartists start to formulate long-term trend lines stretching back before the 2008 state bailouts for debt-ridden financial institutions.

The recent surge in the price of gold has been attributed to the US Federal Reserve leaving interest rates unchanged and deploying rhetoric that hinted at a pause in its monetary tightening of the US dollar.

Jerome Powell (Fed chair) said the central bank would be “patient” regarding further interest rate moves, adding that he was open to slowing the pace of reducing their $4 trillion balance sheet.

Of particular note is that the Fed removed a reference to “further gradual rate increases” in its policy statement, leaving many investors to believe that future rate hikes were on hold until further notice.

The policy update marks an increasingly dovish shift for the Fed. The mainstream financial markets were previously anticipating the central bank would attempt to quicken the pace of its monetary normalisation plans.

Looking back a decade

Back in the first decade of the 21st century, society was in the midst of an e-commerce revolution for goods and services.

This revolution for finance was enabled by mainstream adoption (and affordability) of high-quality computing. Many investors felt that they could, for the first time, actively trade their investment portfolio with low fees and high convenience online. 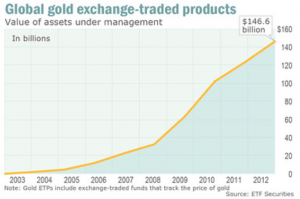 With gold having a wealth preservation story like no other asset class over the last 2000 years, it wasn’t a surprise to see such an ever-increasing electronic AUM (assets under management) for the precious metal during the explosion of the move to online investing.

In a 10-year period, these products grew from nothing to way over $150 billion in asset value backed by the trust in regulators and institutions to settle trades in spot commodity when required.

Among the biggest reasons for the initial popularity of ETFs that drove the growth of ‘digital gold’ products was the accessibility and addition of liquidity into markets.

Before the first gold ETF, investors could not invest in gold easily. They could choose to buy coins or bars, but the additional costs of storage and acquisition made investing in physical gold much less liquid, transparent, and efficient than an electronically traded market.

Back in the early stages of the 2017 crypto market bull run, many felt that the complementary and provably scarce asset of gold was rallying in tandem.

However, the rhetoric by the end of the crypto bull market had changed to one of Bitcoin stealing market investment share away from the ultimate and time-tested form of sound money.

If a new financial crisis hits, I think all forms of sound money will look to initially rally in tandem. However, as time grinds on, I believe the markets (and not regulators) will truly decide the fair price to place on safe-haven assets that may one day fulfill the role of the new digital gold.