The founder of one of Africa’s most well-known crypto organisations has “disappeared” after reports surfaced that he may have lost the password to his exchange and frozen out thousands of customers.

Tawanda Kembo – head of Zimbabwe’s Golix exchange – hasn’t been seen in public for months and, despite dozens of attempts by Coin Rivet journalists via several channels, is seemingly refusing to communicate with the outside world.

Insiders at Golix, however, are hinting that Kembo has misplaced several digital keys – effectively leaving customers unable to access their assets.

Golix clients have been trying to get to their funds for several weeks after Zimbabwean authorities ordered Kembo’s once-flourishing exchange to be shut down earlier this year.

Golix had been toasted as the jewel of Zimbabwe’s financial future when it launched in December 2017 after a rebrand of 2014 start-up BitFinance. By mid-2018, it was one of the most successful exchanges in Africa and hailed as the cure to Zimbabwe’s historically dysfunctional economy.

Now, however, a beleaguered Golix and a missing Kembo may yet conspire to turn what was once the potential financial dream of a nation into an economic nightmare.

The latest chapter in the Golix saga has been verified by two former employees who lifted the lid on the inner-workings and demise of the Harare-based exchange.

At the time, Golix had 50,000 customers in Zimbabwe as it built its portfolio in neighbouring nations with the GLX token.

After several court cases and attempts to restrict Golix’s activities, its founder and chief executive is facing legal costs running into the hundreds of thousands – the latest claim being made earlier this year. It was around this time that Tawanda Kembo himself began to drop off the radar.

He last tweeted from his @tkembo account on Boxing Day, although he did publish an article on LinkedIn only three months ago from the Afro-Asia Fintech Festival.

Despite numerous attempts to obtain a statement for Coin Rivet, the former anti-corruption campaigner and University of Zimbabwe graduate has proved elusive. Curiously, there is an earn.com web page where people can contact the CEO – for five dollars. 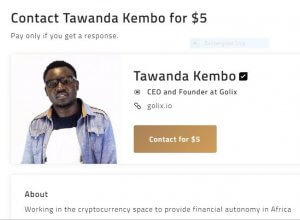 According to two former employees, Kembo has reportedly lost access codes to the Golix exchange, locking the digital assets of thousands of customers.

“I find it hard to believe that this is in any way as suspicious as it sounds,” one of the former Golix workers told Coin Rivet.

“I know Tawanda Kembo, and I have only ever known him to be a good person with good intentions for the people of Zimbabwe – a country which he loves.

“But we understand he has told some of our old colleagues that he has now lost the keys and disappeared, which is something I find to be very unlike the Tawanda Kembo I know.”

It is still not known how much money was made on the exchange’s GLX token as it was repeatedly unable to respond to legal requests for access to financial information.

What is known, though, is that hundreds of customers with inaccessible digital assets held by Golix have since written their funds off.

“They know it is extremely unlikely that they will ever see those funds again,” said the anonymous ex-employee.

“And the authorities here are unlikely to look favourably upon cryptocurrencies or any form of digital finance because of this terrible episode.

“Will we ever see Mr Kembo again? Well, there are thousands of people here in Zimbabwe who would like to think so because they want to ask him about their funds.

“But I’m not so sure. I have a bad feeling he may never resurface after this.”

It is understood that detectives in Harare are preparing to launch a manhunt for the entrepreneur in a fiasco that bears a striking resemblance to the QuadrigaCX scandal, where the keys to the massive Canadian exchange went missing when its founder – Gerald Cotten – disappeared.

It later transpired that Cotten had died in December 2018 after suffering a cardiac arrest in India.

His widow – Jennifer Robertson – has since agreed to return some 12 million Canadian dollars from Cotten’s estate in a voluntary settlement.

Robertson has been handling the fallout from her late husband’s disastrous financial dealings which left more than 115,000 people out-of-pocket to the tune of around 260 million Canadian dollars.

After filing for bankruptcy, she has since been reported to be “responsive, helpful, and cooperative” with the court-appointed trustee as they seek to recover the missing assets.

According to an Ontario court submission, she has been allowed to keep certain assets, including $90,000 cash, $20,000 in registered retirement savings, a 2015 Jeep Cherokee, her wedding band, and $15,000 in personal furnishings.

Prior to the asset exclusion, Ms Robertson insisted to the courts that she was not part of any improprieties that her deceased husband may have been involved in.

“I had no direct knowledge of how Gerry operated the business prior to his death, and was not aware of his improper actions in managing the QuadrigaCX business as outlined by the monitor in its fifth report in June,” she declared.

“Specifically, I was not aware of nor participated in Gerry’s trading activities, nor his appropriation of the affected user’s funds.

“I was upset and disappointed with Gerry’s activities as uncovered by the investigation when I first learned of them, and continue to be.”

Who says DEXs are slow and clumsy? IDEX is about to change the game